1) Hertz makes five adjustments (ignoring ‘Other adjustments’) to net income before including the changes in operating assets and liabilities. List each of these five items and explain why each of these items is added (subtracted) from net income to calculate Net Cash Provided by Operating Activities.

The five adjustments to net income before including the changes in operating assets and liabilities in the consolidated statement of cash flows of Hertz Global Holdings, Inc. are listed as follows;

Since the net income reported in the statement of cash flows is transferred from the profit and loss account which is the difference between revenue and expenditures all of two types;

(a) Those expenditures that relate to transactions in which cash is involved and are actually paid from cash and cash equivalent or are directly credited from the company’s bank account(s).

(b) Those expenditures where no cash is involved and hence are deemed as non-cash expense/items. Such expenses do not reflect any change on the cash held in bank.

However, such expenses do have an effect on the income as follows;

Depreciation on revenue earning equipment and property and equipment is regarded as a non-cash item since depreciation is an expense which is being incurred against the usage of equipment due to wear and tear thereby declining its total value over its useful life and hence has nothing to do with any change in the cash. Similarly, the amortization of other intangible assets is also a non-cash item as it is decline in cost of intangible over its useful life or in other words utilization of economic benefits being derived from such asset of that particular amount and hence has no effect on the cash.

As mentioned above, such expenses are also subtracted from the revenue in order to reach at a loss of ($ ‘000 111,343). In the statement of cash flows all such expenses are added back to such loss to calculate the income/ (loss) which is realized in cash as in cash flow statement only cash items are considered to show the cash inflows and outflows over the year.

Stock based compensation charges is also a non-cash expense because the company has awarded stocks to its employees however nothing is transacted in from of cash except when the employee exercises the option and intends to encash his /her share. Therefore, it is also added back to the net loss to calculate the actual loss realized in cash.

Gain on sale of property and equipment is the difference between the sale proceeds received in cash or kind from the buyer and the book value. Of course the proceeds received in cash are reported in the investing activity in cash flow statement but the gain is not realized in cash and hence regarded as non-cash item. However, it will increase the income. As it has been added to income in the profit and loss account, therefore, it must be subtracted in the cash flow statement in order to reach at the actual amount of profit/ (loss) realized in cash by the company.

The receivables has been decreased from the end of 2008 to the end of 2009 because a positive balance in the operating activities in the cash flow indicate cash inflow which shows that all the rentals due from customers are collected and thus have resulted in the increase in cash flow from operations as follows;

The accounts payable have been also decreased from the end of 2008 to the end of 2009 because a negative balance in the operating activities in the cash flow indicate cash outflow which shows that all amounts due to supplier have been paid off in the year ending December 31, 2009 resulting in decrease in cash flow from operations amounting to ($ ‘000’ 227,479)

The book value of property and equipment is worked out as follows;

As we know the gain on sale of property and equipment is calculated by the following formula;

Since the figure of gain on sale of property and equipment is given in operating activities while the sale proceeds figure is reported in the investing activities, therefore, putting the values we get;

Substituting it we get;

4) What is the largest asset reported on Hertz’s balance sheet? Notice that Hertz does not separately classify assets as ‘current’ and ‘long-term’. Do
you think the largest asset is a current or long-term asset? Why?

The largest asset reported on Hertz’s balance sheet is as follows;

The current assets are those which are readily convertible into cash and cash equivalents due to their highly liquid nature and also form part of working capital of the company’s operations. However, the long term assets in contrast are not liquid because since they have a useful life of more than a year and hence their full value cannot be easily realized within such short time.

From the above table, we can see that revenue earning equipment is considered to be the largest non-current asset of Hertz’s as it has largest carrying amount reported in the balance sheet and has useful life of more than one year.

5) Notice that the largest cash outflow (inflow) relates to rental car acquisition (disposal). a. In which section of the cash flow statement are these cash flows reported? Answer:

Both the rental car acquisition and disposal are reported in the investing activities section of the cash flow statement as it relates to investing and disbursement of funds of the company which obviously cannot be reported under operating or financing activities.

b. If Hertz had leased the cars from the manufacturers under operating
leases, in which section of the cash flow statement would the lease payments be reported? Answer:

In case if Hertz had leased the cars from the manufacturers under operating leases, then it should be reported in the cash flow from operating activities section with description as Cash paid for operating lease.

c. Selected balance sheet and cash flow statement information for Coinstar (parent of Redbox), Netflix and Men’s Wearhouse are attached. Coinstar and Netflix rent DVDs and Men’s Wearhouse rents tuxedos. In which section of the cash flow statement do each of these companies report the cash outflows related to obtaining their rental products? Answer:

Each of these companies would report the cash outflows related to obtaining of their rental products in the investing activities section of their cash flow statement.

d. Do you think Hertz reports the cash flows related to the acquisition and disposal of rental cars in the appropriate section? If yes, explain why. If no, indicate which section you would report these cash flows and explain why.

Yes, both the rental car acquisition and disposal are reported in the appropriate section that is, investing activities section of the cash flow statement as it relates to investing and disbursement of funds of the company which obviously cannot be reported under operating or financing activities. Since the acquisition of such assets cost money and it is an investment in the business by implying more capital expenditure in the form of rental cars which will eventually generate revenue in the form of rentals to be received from borrowers. 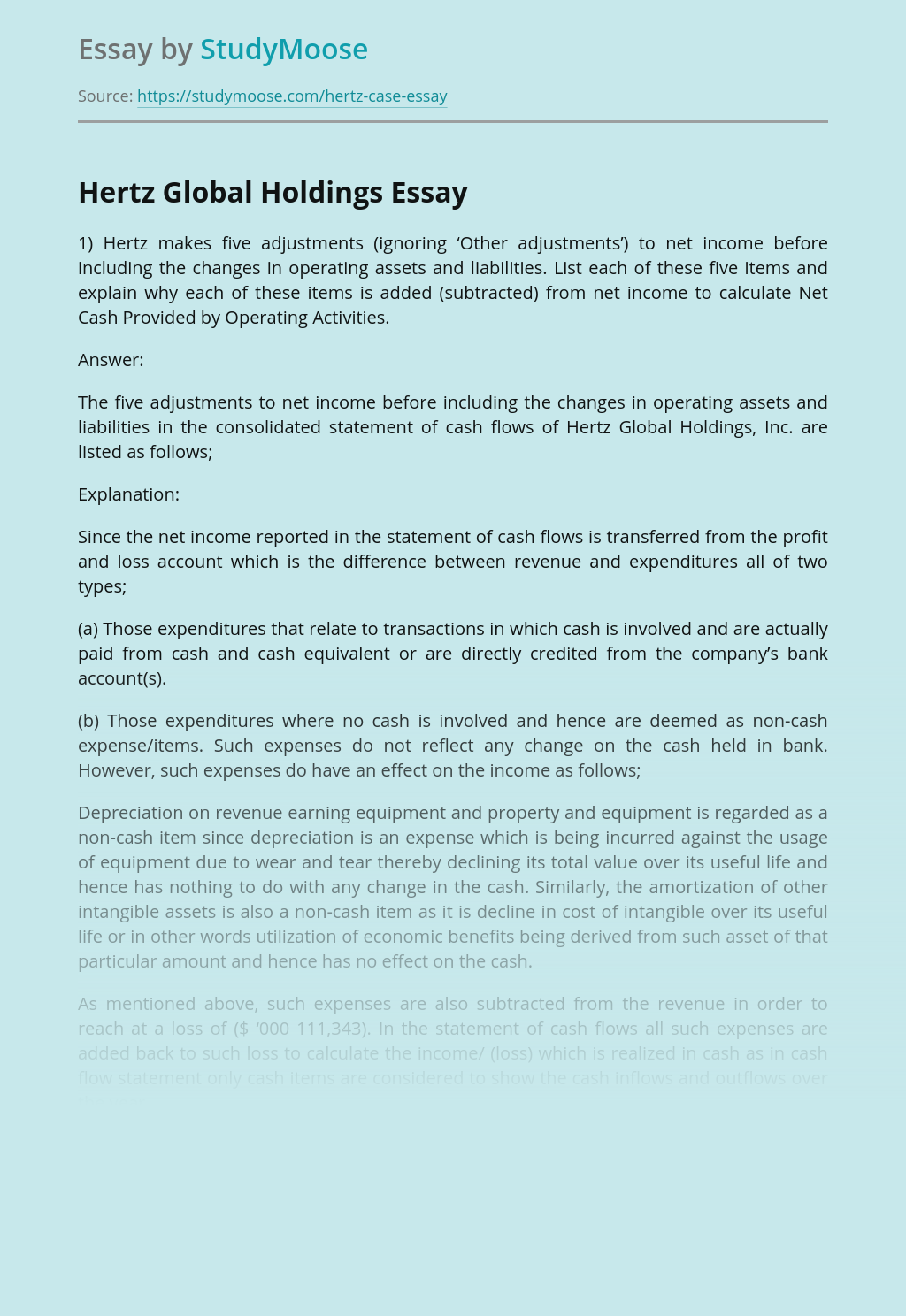