Hero or Villain: Ms. Griffin from Turn of the Screw

In Turn of the Screw our main is Ms. Griffin who is a governess and is assigned to watch a boy and a girl. The girl’s name was Flora who was eight years old, and the boy Miles who was ten years old. The children’s family had all died and they were taken in by their uncle who didn’t want to take care of them. So the Governess, Ms. Griffin was assigned to take care the kids, in return she would get paid good money and she would have a place to live.

Don't use plagiarized sources. Get your custom essay on
“ Hero or Villain: Ms. Griffin from Turn of the Screw ”
Get custom paper
NEW! smart matching with writer

It turns out the kids in the story were weirder than she had thought.

The Governess stepped up and took care of the kids because she liked the uncle. The Governess turned out to love the kids, she didn’t know Miles to well but she learned to love him too. Miles turned out to be a very well mannered kid, who was very classy and nice.

Proficient in: The Turn of The Screw

Miles also got kicked out of school because he was teaching the kids some bad and disturbing things. Miles learned those things from a guy named Peter Quint, who Miles had to stop hanging out with because he was teaching him those bad things. Flora ended up getting sick and she had to take extra care of her more. One afternoon while Ms. Griffin was daydreaming she saw a Ghostly figure, she started to question what was going on with the town, because this wasn’t the first time she had saw the ghost.

She ends up suspicious of the town wondering “Is there a terrible secret.”

On another Sunday afternoon the Governess had an encounter with a male that was staring in the dining room window, he just sat there and looked for awhile. He just stood there staring at the Governess for a couple of seconds. When he finally disappeared Ms. Griffin thought that he was an entity in search of another person. Though Ms. Griffin was scared she decided to stay, and take care of the children. The Governess was nervous and scared at the thought of what the Ghost would do to the children.

The story implies that Ms. Griffin could have been seeing Peter Quint, even though he passed away a while ago. After to doing research about the death of Peter Quint, she is confident in her beliefs she was also confident in the charges. So Ms. Griffin decides to try to keep up with Children as she is suspicious of the Ghost coming for the kids.

As the kids Guardians she started to watch and keep up with them more than what she used to she started to keep up with them and make sure the ghost wouldn’t go and follow them out of fear of what he would do to them. While the Governess was out one time she was being watched by another figure, a different one from last time. This time the Ghost was a women, Ms . Griffin recognizes the women. Ms. Griffin realizes the Ghost was Mrs. Jessel the other Governess before her. She decides she is done with all the advice and she is also done with all the hauntings that are going on so she decides she needs to go out to seek Mrs. Grose.

Hero or Villain: Ms. Griffin from Turn of the Screw. (2021, Dec 07). Retrieved from https://studymoose.com/hero-or-villain-ms-griffin-from-turn-of-the-screw-essay 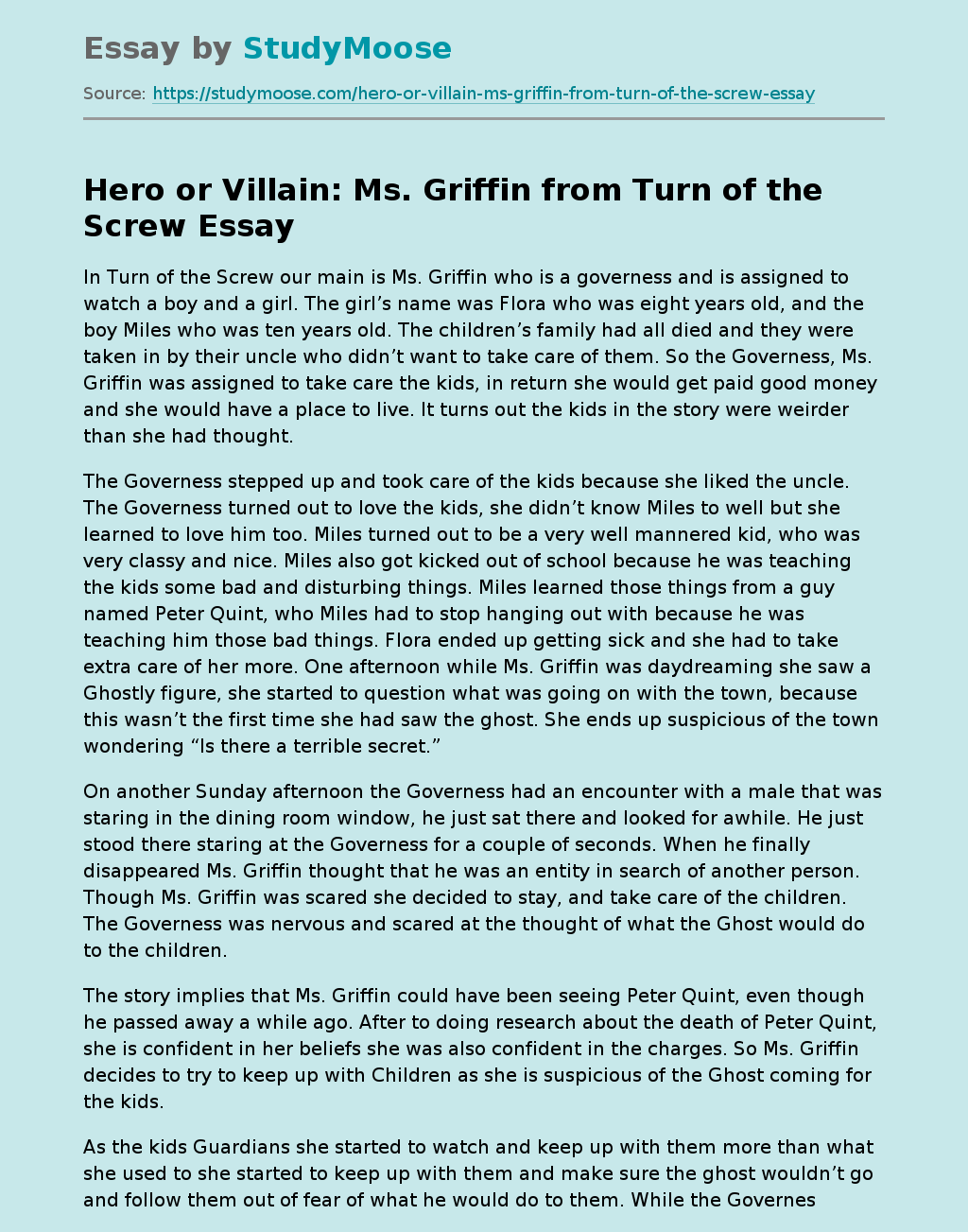