Napoleon Bonaparte must be considered a hero in French history. Through his liberal ways of coming to power and controlling France, Napoleon was able to create unity and stability, both political and economic, in one of the most powerful nations in Europe at the time. Napoleon was not only an excellent leader, but also a dominant war strategist. He was able to conquer enemies of France and expand Frances territory. By giving people rights and freedoms, forming a respectable educational system and creating religious tolerance, along with dominating the enemies of France with his excellent skills in militarism, Napoleon became one of the greatest French leaders and heroes of all time.

Don't use plagiarized sources. Get your custom essay on
“ Hero: Explaining why Napoleon Bonaparte ”
Get custom paper
NEW! smart matching with writer

Napoleon claimed “Equality must be the first element in education. This was the basis of the educating system Napoleon strived for. The Education reforms which Napoleon introduced in 1802 called the lycees allowed this equality to occur and enhanced the way of learning for all of the citizens. By giving all citizens the right to an education, Napoleon was showing that he would guarantee prosperous future for France.

Napoleon also created a document referred to as the Code Napoleon, yet another very liberal action, which stated the rules and laws of the state along with stating and guarding the rights and freedoms Napoleon wanted all Frenchmen to have. Napoleon also worked heavily to stabilize the French economy. He developed the Bank of France and helped propel the Francs value higher and higher until eventually it was the highest valued currency in Europe.

Not only did Napoleon solve economic problems, but he also worked to solve social and religious differences as well. Previously the church was an enemy of and was against the rule of Napoleon, however this issue was resolved when The Concordat was introduced by Napoleon himself. Mending the rift between the Church and State allowed freedom of religion and rejuvenated the beliefs within the people of France. The Concordat which was signed stated that Catholicism would be recognized as the religion of the majority and allowed the church to resume processions and reopen the seminaries. Though Catholicism was now viewed as the religion of the majority, it still was not the official religion of the state, crating a more religiously tolerant society in France. This move once again supports the more liberal demeanor of Napoleon as previously few would have dared to challenge the authority of the church in this way.

As a military genius, Napoleon won many battles to expand France and was always welcomed back to France as a hero. By instituting the Levee en Masse, Napoleon was able to ensure he would have the man power needed to operate his great war machine. His use of strategic warfare throughout many battles allowed him to be seen as a hero not only in France but all of Europe. Although his army was outnumbered by the Russians and Austrians in December 2, 1805, Napoleon’s brilliant strategies resulted in a defeat of the opposing armies in the Battle of Austerlitz.

In many other battles that were fought and won by Napoleon, he would use his military experience and tactics to anticipate his opponent’s attacks and defeat them no matter the odds. After winning many battles he expanded France by signing treaties with the other countries which he had occupied. The fact that Napoleon won so many battles gave the French people something to be proud of. It was victories such as these which brought great pride and a feeling of unity to the people of France. Napoleon was seen as a great heroic from his successes on the battlefield as he expanded his now vast empire.

Napoleon Bonaparte must be seen as not only a hero of France, but perhaps the greatest French hero of all time. Through his liberal ideas and actions, Napoleon was able to grab hold of a nation and bring it under his control. Through such acts as the Code Napoleon and The Concordant he was able to give the French people the rights and freedoms they so desired. Napoleon created the bank of France and contributed greatly to the strengthening of the Franc. Lastly Napoleon, through and his army dominated the rest of Europe expanding France into vast empire. Napoleon was a great hero, who, through liberal action, revolutionized France. 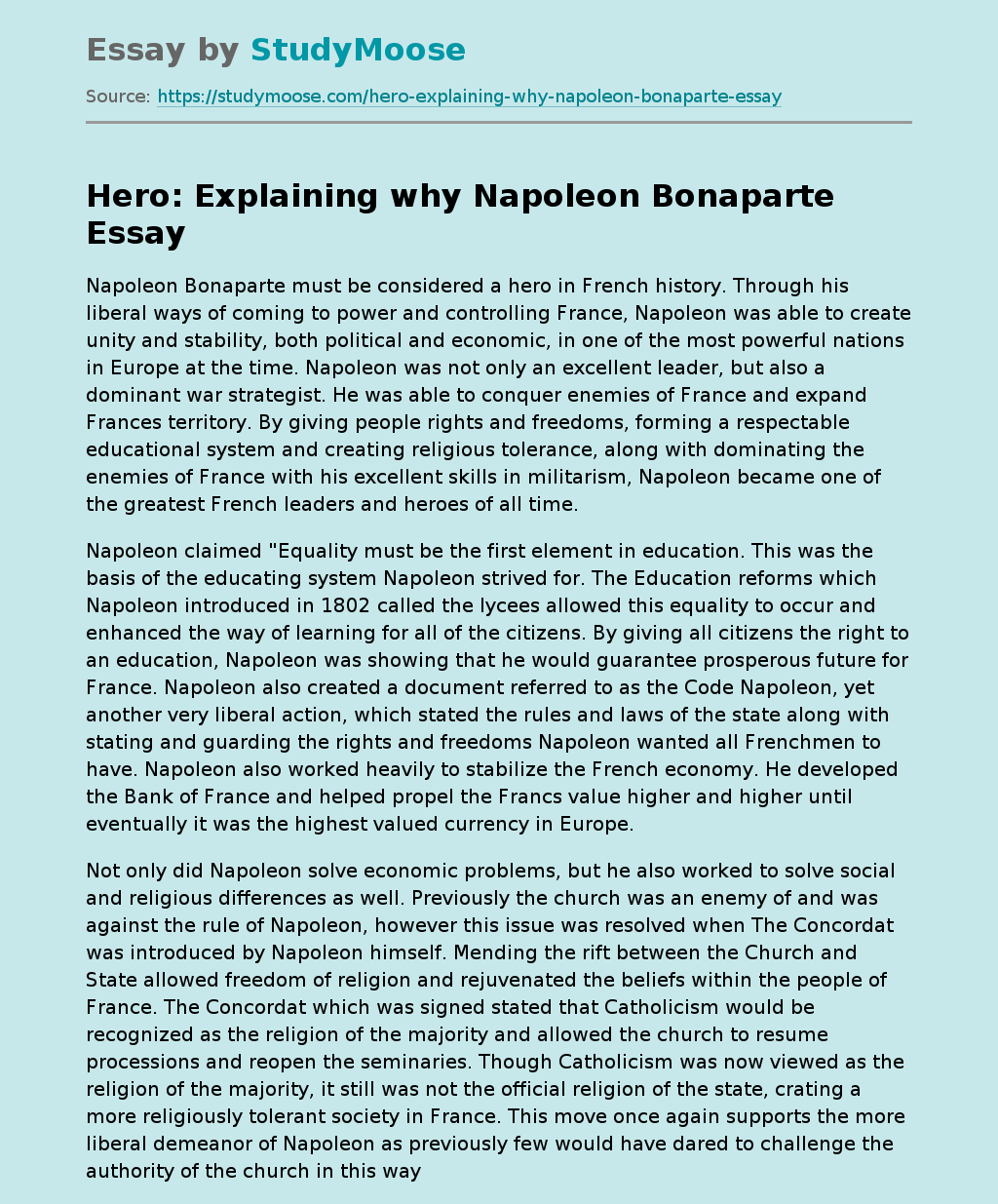