Heritage is the product which involves culture or history of

Heritage is the product which involves culture or history of community that is passed from one generation to another. Heritage represents the development of people life from the past until now. Keeping our heritages which are valuable for us we can easily introduce to foreign people about our past history. By keeping these kinds of heritages people all over the world can have some information about each country. Therefore, the lists of UNESCO was established which contains tangible as well as intangible heritages.

Don't use plagiarized sources. Get your custom essay on
“ Heritage is the product which involves culture or history of ”
Get custom paper
NEW! smart matching with writer

Tangible heritage is perceptible by touch. It includes: monuments, artistic creations and physical products if human creativity which are invested in society. The intangible heritages are not having physical presence. It includes: traditional holidays, culture, design of traditional buildings and many others. UNESCO established this list to protect and keep which are so valuable for people and also to keep them as a part of the country’s history. Badakhshan is one of the regions which have several valuable heritages some of which are in danger or getting loose from their community.

One of these heritages that are actually in danger it is “Pamirian house “locally known as “Pomeri Chid” which is very important for Pamirian community. It is the architecture with deep meaning that is passing from one family to another. It embodies elements of ancient Aryan philosophy – including Zoroastrianism many of which have since been assimilated into Pamiri Ismaili tradition. The symbolism of specific structural features of the Pamiri house goes back over two and a half thousand years.

It is also known as a symbol of universe. Pamirian houses are normally built of stones and plaster. Every single thing has its own meaning which is connected with their religion. The special benefit of this house is to not forget about their religion, culture as well as about their tradition. It represents a masterpiece of oral traditions or expressions, performance, art, or music that is used to pass on knowledge, culture and social values and collective memory. It is also from an integral part of the collective memory of a cultural tradition or a civilization which is living or is in danger of disappearing. Many people because of development of life conditions they are building for themselves modern houses. However, the origin Pamirian house contains symbolical 5 pillars, raised platform and a skylight which has four concentric squares known as «chorkhona».

Firstly, five supporting pillar represents the five members of Ali’s family. Bibi Fotima (Alis wife) Mohamed’s daughter, Mohammed, Ali his son in – law, and their sons Hassan and Hussein. Moreover, in Zorostrian the pillars have corresponding to the major gods; Mehr, Surush, Anahita, Ozar and Zamyod. These five numbers also follows the five principles of Islam. “The pillar symbolizing the prophet Mohamed (‘Khasitan-Shokhsutun’), to the left of the entrance, was traditionally made of juniper – a sacred tree and symbol of purity, the smoke of which has healing and disinfectant properties; today, there are no longer enough junipers of adequate size for making this pillar in newly constructed houses. The child’s cradle will normally be put close to this pillar. The first pillar which symbolize Ali (Vouznek-sitan’) is arranged left from the passageway. In Zoroastrian custom, these pillars related to the angel of love (‘Mehr’). At weddings, the marriage couple will be situated at this pillar, in the desire for being honored with favorable lack and happiness (‘Barakat’). Tradition requires that – in addition to her own father and father-in-law – the bride must have a third father, the person who, at this pillar, customarily reveals her face from seven cloaks during the wedding function” (Robert Middleton 2002).

Heritage is the product which involves culture or history of. (2019, Nov 20). Retrieved from http://studymoose.com/heritage-is-the-product-which-involves-culture-or-history-of-example-essay 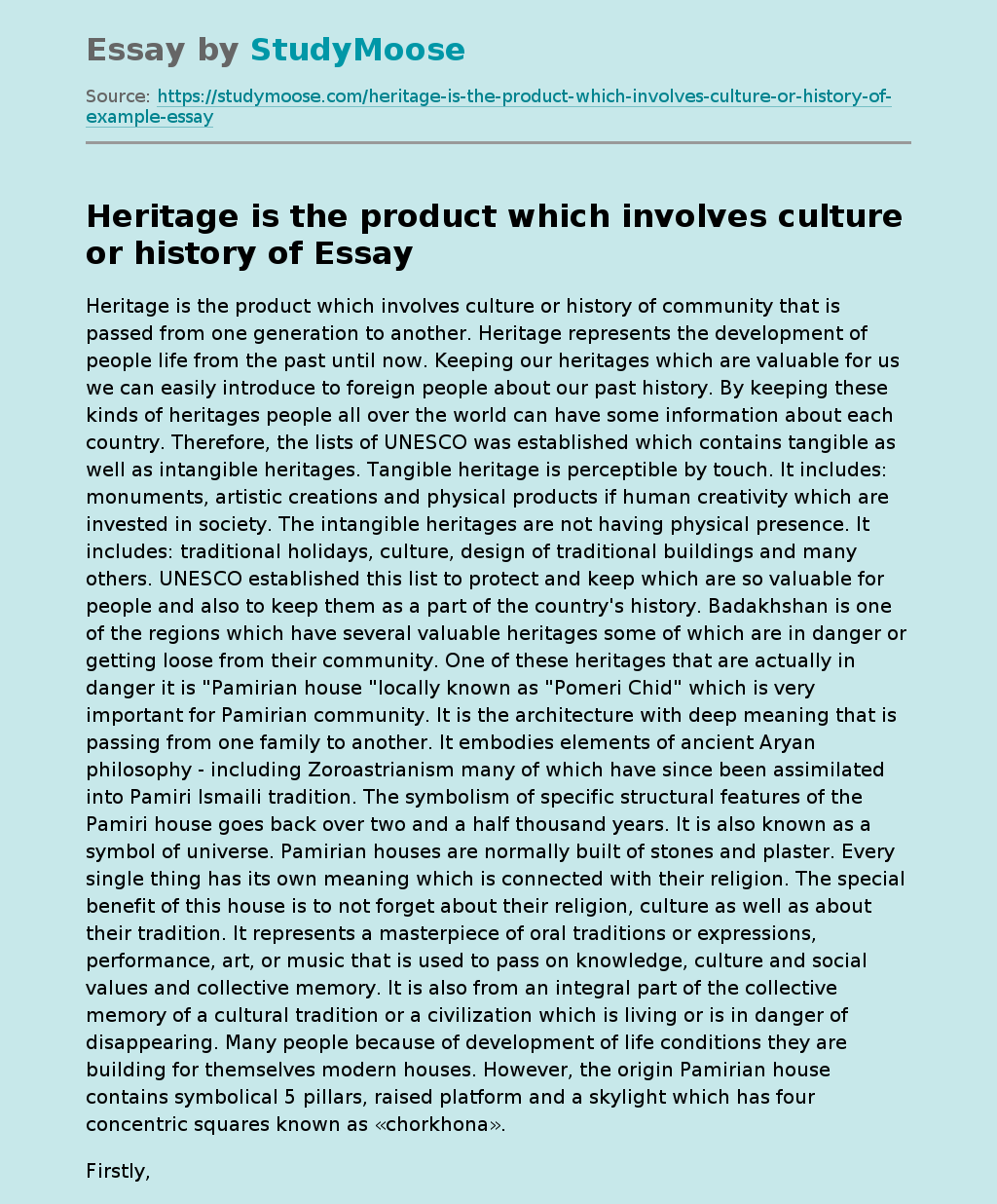