Part B – Henry VIII broke from Rome because he wanted to increase his personal power. Explain why you agree or disagree with this view. (24 marks) The break with Rome was the end of papal rule in England. For several reasons, which I shall discuss in this study, Henry VIII decided to replace the Pope as Head of the Church in England and appoint himself as the Supreme Head of the Church. The points needed to be looked at in this study are the possible reasons as to why he would want to break with Rome and the consequent reformations that he created.

Don't use plagiarized sources. Get your custom essay on
“ Henry VIII broke from Rome because he wanted to increase his personal power ”
Get custom paper
NEW! smart matching with writer

It had been argued by 20th century historians, such as A. G. Dickens, that the pre-reformation church was a corrupt and failing institution and therefore in order to reform the church practice, Henry had to appoint himself as the Supreme head. A.G. Dickens looked at the state of popular religion and how this affected a demanded for change, especially the Lollards; anti-clericalism, according to their line of argument was widespread and as a result there was a need for change.

To support this argument there were significant changes in order to protect the sanctity of the church; such as the supplication against the ordinaries in 1532. This act aimed to change cannon law and which was threatening lawyers and authorities, those existing laws were reviewed by laymen and clergy men.

A potential motive for this is to reduce the power of the church and anti-clericalism, although beneficial to the state of the church,Henry did use it to enforce his own demands.

Although there is no general reason as to why the summoning of the reformation parliament was called, it can be assumed that it was primarily to deal with Henry’s divorce case and to put pressure on the Pope to get absolute obedience. In 1529, the ‘drift’ period was formed in which although Henry wanted a divorce, he didn’t want a split from the church. Therefore, arguable, due to the lack of agreement from the Pope, Henry needed to break from Rome in order to get the divorce. However that does not explain why he continued to take power from the clergy after the divorse occurred. Although Henry did want to put pressure on the church in order to get permission to divorce Catherine of Aragon, there were no signs that he wanted to break with Rome.

It was only until 1532 did Henry start to become financially aware, as it was clear that the Pope gave no concern for what was happening in England as he was currently a hostage under Charles V. In late 1532, Anne Boleyn became pregnant, and although he was still legally married to Catherine it could be presumed that Henry had realised he had already split from Rome. The financial resources of the church were huge, and although the income of the Crown was more than enough, there was a possibility of attacks on England from Catholic countries such as France and Spain.

The legislation of the reformation parliament suggests that Henry did show motivation for financial gain, however this was more of a secondary benefit and there was no urgent need for money then. By 1533 everything Henry had aimed for was completed; he had divorced Catherine, he had reduced the Pope’s power and he had a new heir, therefore there was no need to create any more acts. However Henry, the parliament and Cromwell continued the reformation parliament for the next 10 years. In these 10 years, his main actions concerned reducing the power of the church within England and for Henry to gain both temporal and spiritual power. With the act in Absolute Restraint of Annates, he created total control over his Kingdom and with the Treason Act, no one was able to say or write things that were deemed as being in opposition.

Given that it was in the 10 years after the split with Rome that he created the most change amongst his Kingdom with taxes being paid to the crown and the dissolution of the monasteries, where all land now belonged to the Crown, he was financially motivated. In conclusion, given that financial and personal motivation came after the split with Rome one has to assume that the primary motive for Henry was to get a divorce from Catherine, especially as she was now unable to produce a male heir and there were more suitable claims to the throne that from Henry. Financial gain came as a benefit from the removal of power from the clergy, which was primarily used to pressure the Pope into conforming.

Henry VIII broke from Rome because he wanted to increase his personal power. (2016, Apr 17). Retrieved from https://studymoose.com/henry-viii-broke-from-rome-because-he-wanted-to-increase-his-personal-power-essay 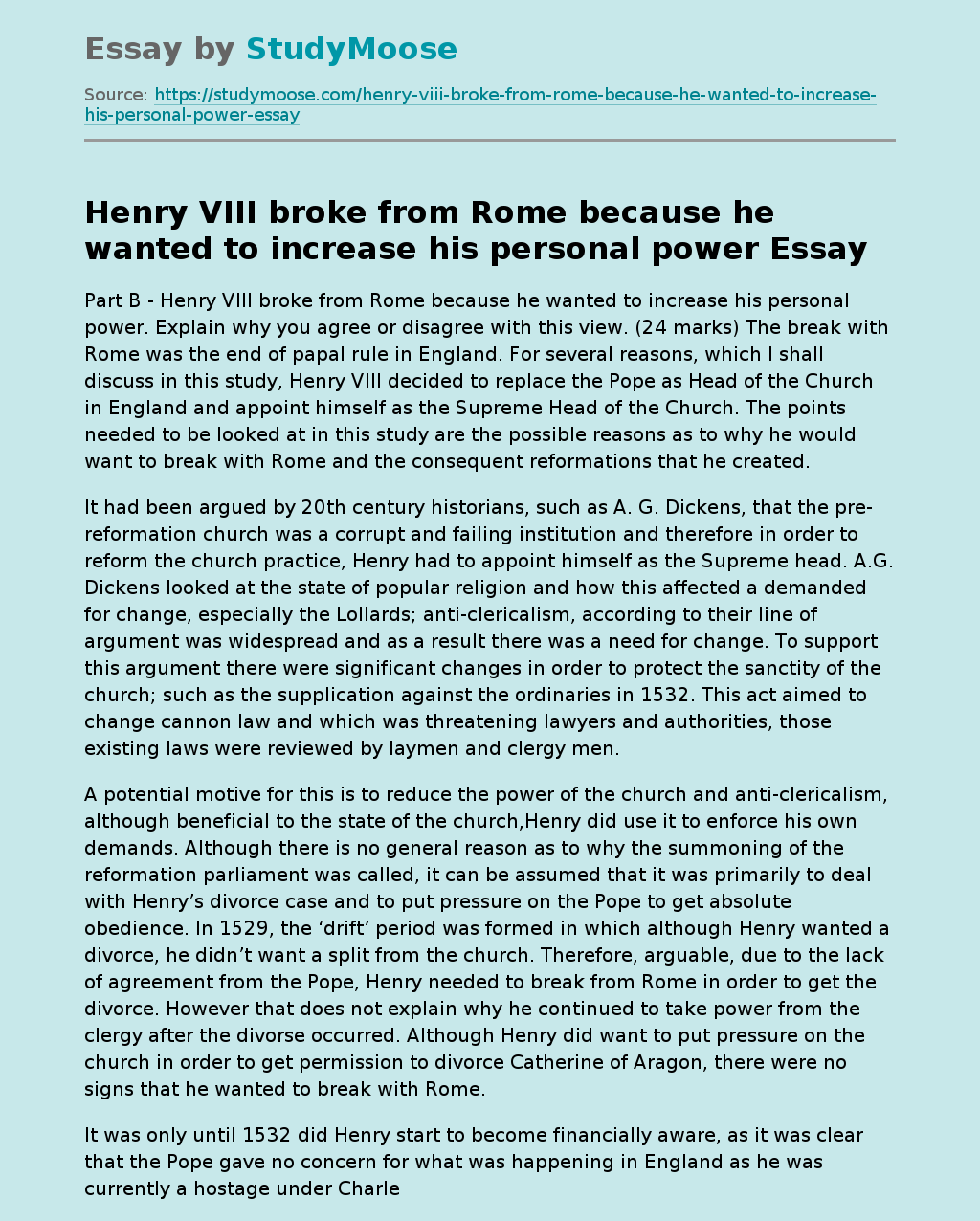