Retaining involved magnates taking men into their service, generally involving the payment of fees and sometimes the granting of a distinctive badge or uniform (livery).

This practice served the king, in that it allowed him to recruit armies more easily, by making contracts with leading magnates who then provided their retinues for service with the king’s army for a specified time. However, it did allow magnates to retain what were, in effect, ‘private armies’ and, at this could be very detrimental to public order.

Don't use plagiarized sources. Get your custom essay on
“ Henry VII and Retaining ”
Get custom paper
NEW! smart matching with writer

Thus, kings grew increasingly concerned to control the practice. The major statute of the fifteenth century which tried to limit it was Edward IV’s statute of 1468. This outlawed some forms of retaining, but implicitly allowed others by stating (vaguely) that no unlawful retaining was allowed. In practice, retaining continued after Bosworth.

In 1486, Henry persuaded both Houses of Parliament to take an oath promising that they would not retain unlawfully.

In all, Henry’s parliaments passed four acts relating to retaining, but three of these did little to change the position that had existed since 1468. According to Chrimes, Henry wished to maintain the practice of retaining, but ‘only so that he himself got the benefit of it for his own purposes’. Chrimes also noted that he sought to repress it ‘insofar as its practice by his subjects redounded to the public disadvantage and the corruption of public order’. Thus, Henry never intended totally to end the practice of retaining, but he did intend to control it.

The most significant of Henry’s acts relating to retaining was 19 Henry VII c.14 (1504), which stated that retaining, other than of household servants, was illegal. According to Cameron, this act represented the first occasion upon which the right of a nobleman to retain was called into question. The act did, however, allow Henry to grant licences to individuals to retain. There are few examples of such licences, but recent research suggests that they were granted to crown stewards and other officials entrusted with the management of royal estates.

There were a number of prosecutions before the court of King’s Bench for illegal retaining under Henry VII, e.g.:

There were also some high profile cases later in the reign, e.g. involving the prosecution of Henry’s ally, the earl of Oxford and Lord Burgavenny, who was heavily fined in 1507 for keeping an illegal retinue in Kent (Burgavenny had a long history of violent disorder in Kent). 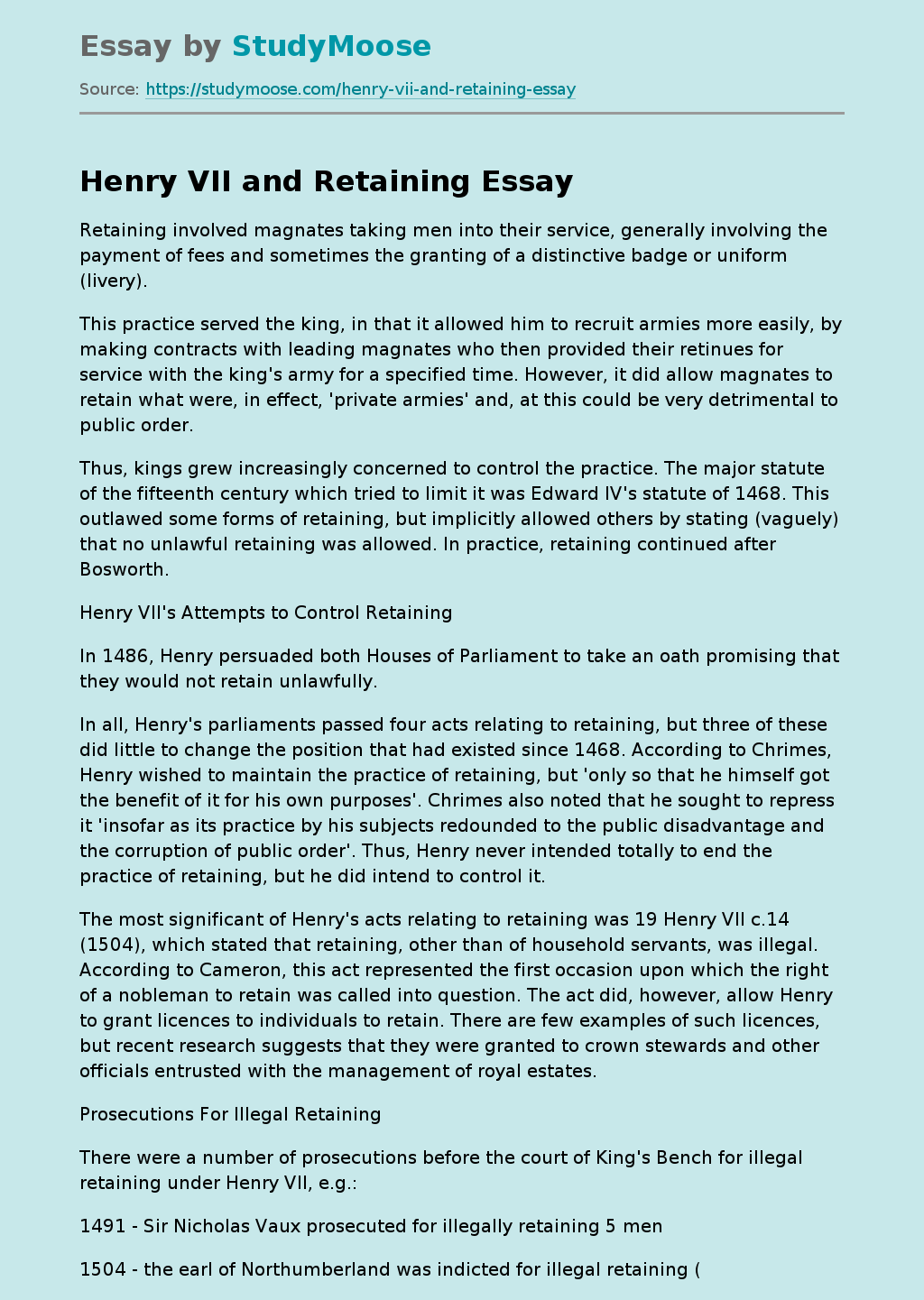