Henry in the Red Badge of Courage: A Hero or a Coward?

Henry is one of the characters in the book The Red Badge of Courage by Stephen Crane. Is Henry a male protagonist or a coward? Heroes are people who would go out and threaten their lives to save the lives of others rather than run away terrified. Cowards will not go out and risk their lives, they will run away. Cowards are also thought of as quitters. Henry is both a coward and a hero.

In the beginning of the book, by Stephen Crane, Henry chooses run away from the fight, but towards the end of the book, he decides to take on the role of hero by accepting the most dangerous job any man could during the time of the Civil War, which was the flag bearer.

Don't use plagiarized sources. Get your custom essay on
“ Henry in the Red Badge of Courage: A Hero or a Coward? ”
Get custom paper
NEW! smart matching with writer

The flag bearer is a man that would be in the front of the line. What makes this dangerous is that the enemy would be shooting towards him but not at him. Even though they were not allowed to shoot at the flag bearer, there would always be a remarkably high chance that he would get hit by a stray bullet because the guns they had during the civil war were extremely inaccurate.

There are times in The Red Badge of Courage when Henry shows his heroics. During the battle, Henry was running away but he stopped to take the responsibility of flag bearer. Henry didn’t have to do this but he did because he wanted to make up for the cowardly things he did.

“The dead man, swinging with bended back, seemed to be obstinately tugging, in ludicrous and awful ways, for the possession of the flag. ” (Crane 116) Henry was running back and tried to acquire the flag from the man who is almost dead.

This shows Henry’s heroics because the man who is almost dead did not want to give up the flag because he knew how important that flag is, and he thinks Henry is just going to do some kind of cowardly action he did near the beginning of the book. The dead man was obstinately tugging which means he did not want Henry to have the flag. Henry wanted the flag to show that he is not some coward and that he can take on any kind of dangerous job. Henry does not want to be called a coward any more.

He doesn’t even like people thinking of him as a coward, which is why he took on the responsibility of flag bearer. The man with the flag was swinging the flag in some crazy ways because he did not want Henry to have the flag. He probably believed that if he gave Henry the flag, that something bad would happen which is why Henry wanted the flag, to show that he is not a coward anymore. Henry shows his heroics near the end of the book, but if anyone reads near the beginning of the book, you will notice Henry’s cowardice personality.

In one of the fights, at the beginning of the book, Henry is running away. Even in the part where Henry shows his heroics, he was running away seconds before he showed his heroic persona. Before Henry took the flag, he was trying to run away into the forest to avoid getting hit by a bullet. Earlier in the book, Henry shows his cowardice. “He turned away suddenly and slid through the crowd. His brow heavily flushed, and his fingers were picking nervously at one of his buttons. He bent his head and fastened his eyes studiously upon the button as if it were a little problem. (Crane 56) Henry slid through the crowd swiftly because he ran away from the fight and he is ashamed that anybody would notice so he is hastily trying to get away from the crowd. When Henry’s brow flushed, he was embarrassed because he thought people would be thinking of him as a coward and noting the fact that he bent his head and is picking at one of his buttons show that he is nervous and is trying to distract himself and hide his face because he is embarrassed that he is walking with the wounded and he only has a bullet scratch.

Whenever somebody does something embarrassing, they will try and focus on something else to hide it from other people. In this situation, that is exactly what Henry is trying to do. He is hiding his face picking at his button because he is embarrassed. In conclusion, some people are heroes and some people are cowards. There are also people who are cowards but become heroes. Nobody can be a hero and a coward at the same time. Humans can only be one or the other. It is impossible for someone to be a hero and a coward.

People are either risking their lives to save the lives of others or they are just running away, being absent from the fight because they do not want to get hurt. In The Red Badge of Courage, that is exactly what Henry was doing during the first half of the book. Later on, Henry character changed to the hero because he got tired of being called something he did not want to be called. People can start off as cowards, but then they will change because they like being called a hero better than being called a coward.

Henry in the Red Badge of Courage: A Hero or a Coward?. (2020, Jun 02). Retrieved from https://studymoose.com/henry-red-badge-courage-hero-coward-new-essay 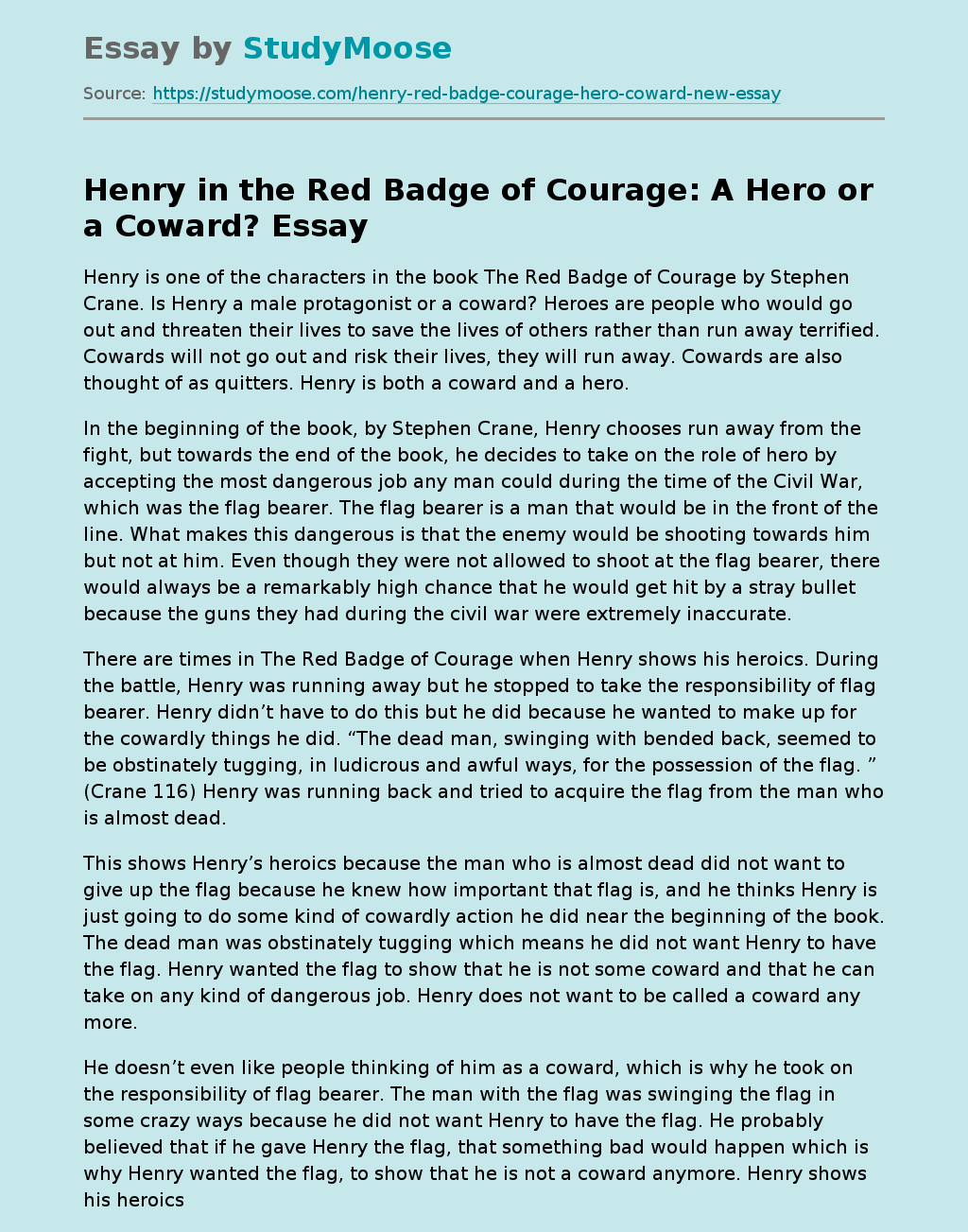