In the recent years the views of ‘strategic management’ has changed significantly. It has been critically studied and classified as a field of managerial practice that should have been given more thought. (Knights and Morgan, 1991) There are two essential parts to strategy, actions that are planned ahead and developed carefully according to many factors once implemented. A proper strategy created and implement to a company would give a competitive advantage over other companies. This report will address the position of the article in a wider debate as different scholars have different opinions in strategy.

Turn in your highest-quality paper
Get a qualified writer to help you with
“ Henry Mintzberg ”
Get high-quality paper
NEW! AI matching with writer

It will discuss about the theoretical underpinnings, strengths and weakness in Henry Mintzberg’s article “Crafting Strategy.”

The decisions made by organisations were taken into account and put together as different types of strategy. His thesis was “the crafting image better captures the process by which effective strategies to come to be.” However “the planning image, long popular in the literature, distorts these processes and thereby misguides organisations that embrace it unreservedly.” (Mintzberg, 1987)

The article appears to focus on an emergent approach to strategy. Mintzberg states, “a key to managing strategy is the ability to detect emerging patterns and help them take shape.

” This is suggested through the fact that the role of a manager “is not just to preconceive specific strategies but also to recognize their emergence elsewhere in the organization and intervene when appropriate” (Mintzberg, 1987). One of the earlier influential writers of strategy Philip Selznick who supported this theory wrote about the ‘character’ of an organization being separate and integrates “commitments to ways of acting and responding.” (Selznick 1957) Ghosal, Barlett et al also suggest this point by mentioning “it’s the focus in traditional strategy on value appropriation rather then value creation.” (Ghosal, Barlett et al, 1999)

Mintzberg’s theory captures a mix of Richard Whittington’s classical and processual school of strategy. This is modelled in the article as the potter is characterized as a craftsman strategist. In Whittington’s model ‘developing and defining’ falls under Michael Porters classical ‘deliberate’ approach to strategy and thinking lies within Henry Mintzberg’s approach to emergent strategy. In the view of strategy Porter (1980; 1985), Andrews (1971) and Chandler (1962), the prescriptive approach to strategy is shown for its dependence on analysis and planning. This is also view is also supported by Graetz who suggests that strategic thinking is already considered necessary process closely linked to strategic planning. (Graetz, 2002) Wilson goes further by mentioning, “strategic thinking should replace strategic planning.” (Wilson. L., 1994) Heracleous proposes that strategic planning and strategic thinking is two distinct but related processes, strategic planning is analysis and strategic thinking involves synthesis. (Heracleous, 1998) Many scholars including Mintzberg who emphasizes heavily on the processes of learning, compromising and adjustment is that strategy is a process. He suggests that the planning and then implementing strategy is unsustainable for long term. (Mintzberg, 1990) In 1994 Mintzberg provided some evidence of the failure of planning.

Mintzberg’s does identify “there is no such thing as purely deliberate strategy or purely emergent one.” This is further emphasized when he states “ all strategy making walks on two feet, one deliberate and the other emergent.” This suggest that deliberate and emergent is intertwined which is emphasized when Mintzberg mentions, “deliberate and emergent strategy form the end points of a continuum along which the strategies that are crafted in the real world maybe found.” (Mintzberg, 1987) Mintzberg treated strategy differently from traditional literatures that only focused on one type of strategy.

While other scholars associated themselves in four schools of strategy Henry Mintzberg defined ten schools of strategy. (Mintzberg, 1998) Crafting Strategy is positioned in the learning and design school. In this he suggested strategy as a ‘ploy’, which gives company a competitive advantage, as the strategy is misleading therefore, unpredictable thus competitors are unable to know what the company is planning. This is supported by Rumelt who mentions “one person’s strategies are another’s tactics – that what is strategic depends on where you sit.” (Rumelt, 1979)

Crafting strategy shows flexibility and therefore makes it more prepared to implement. Henry Mintzberg states “strategies can be ‘form’ as well as ‘formulated.’ (Mintzberg 1987) It suggests that there is no standard approach to strategy thus every company or individual can use it as it is tailored to the company needs. According to Kipping as it is flexible it allows “freedom to craft their best strategy” (Kipping, 2010)

In this article Henry Mintzberg based his research on mass production companies such as Honda, Volkswagenwerk and General Motors. His conclusions about strategy derived from assessing these major companies may not be applicable to other companies as some managers are not competent to the strategy. This is mentioned by Noe who states “Emergent strategies…rely on the organization’s ability to learn from the actual experiences of employees at all levels” (Noe et al., 2003)

Whittington states ”mechanisms ensure that the strategy process remains objective rather than being captured by a particular management faction.” This suggests that managers are able to draw from extensive and less detectable sources of power. (Whittington, 1993). Mintzberg argues that the reality of strategy is not a planned organizational phenomenon but better characterized as an emergent. (Mintzberg et al., 1998) However Mintzberg fails to address these additional conditions suggested by Whittington that are thought to be potentially vital points in strategic management.

Stoney mentions that “ In the strategic management model, responsibility for corporate level decision-making rests with a core or strategic elite who are discharged from the day-to-day responsibilities of operational activities, these being devolved to the lowest possible level of control.” (Stoney 1998) Supported by Anthony and Dearden mentioning that strategic planning is a function in the executive level that is designed to ensure that the direction is followed as set. (Anthony & Dearden 1976) This will help companies maintain a competitive advantage however as it is only based on executive level views lower ranked staff in the companies is ignored. This is suggested by Alvesson and Willmott who states, “broader power relations privilege the interests and viewpoints of some groups while silencing and marginalizing others. “ (Alvesson and Willmott, 1996) Henry Mintzberg himself mentions this view by stating “senior management sets of broad guidelines and the leaves specifics to other lower down in the organization. (Mintzberg ,1974)

Mintzberg does appear to focus most of his ideas towards emergent strategy however he does address that there can be no such thing as just deliberate or emergent strategy. (Mintzberg 1987) They both need to intertwine in order for the strategy to work. Crafting strategy is based on long-term learning, “errors become opportunities and limitations stimulate creativity” (Mintzberg 1987) This is what “causes the moulds streams of decision into patterns” as suggested by Hedbery and Jonsson. (Hedbery and Jonsson, 1977)

P. Selznick, Leadership in Administration: A Sociological Interpretation (New York, NY; Harper & Row, 1957) p.47. A subsequent paper by the author (in process) on the “design school” of strategy formation shows the link of Selznick’s early work to the writings of Kenneth Andrews in the Harvard policy textbook. K.R. Andrews, The Concept of Corporate Strategy, Revised Edition (Homewood, IL: Down Jones-Irwin, 1987).

Whittington, R. (1993) What is Strategy – and Does it Matter? London: Routledge. 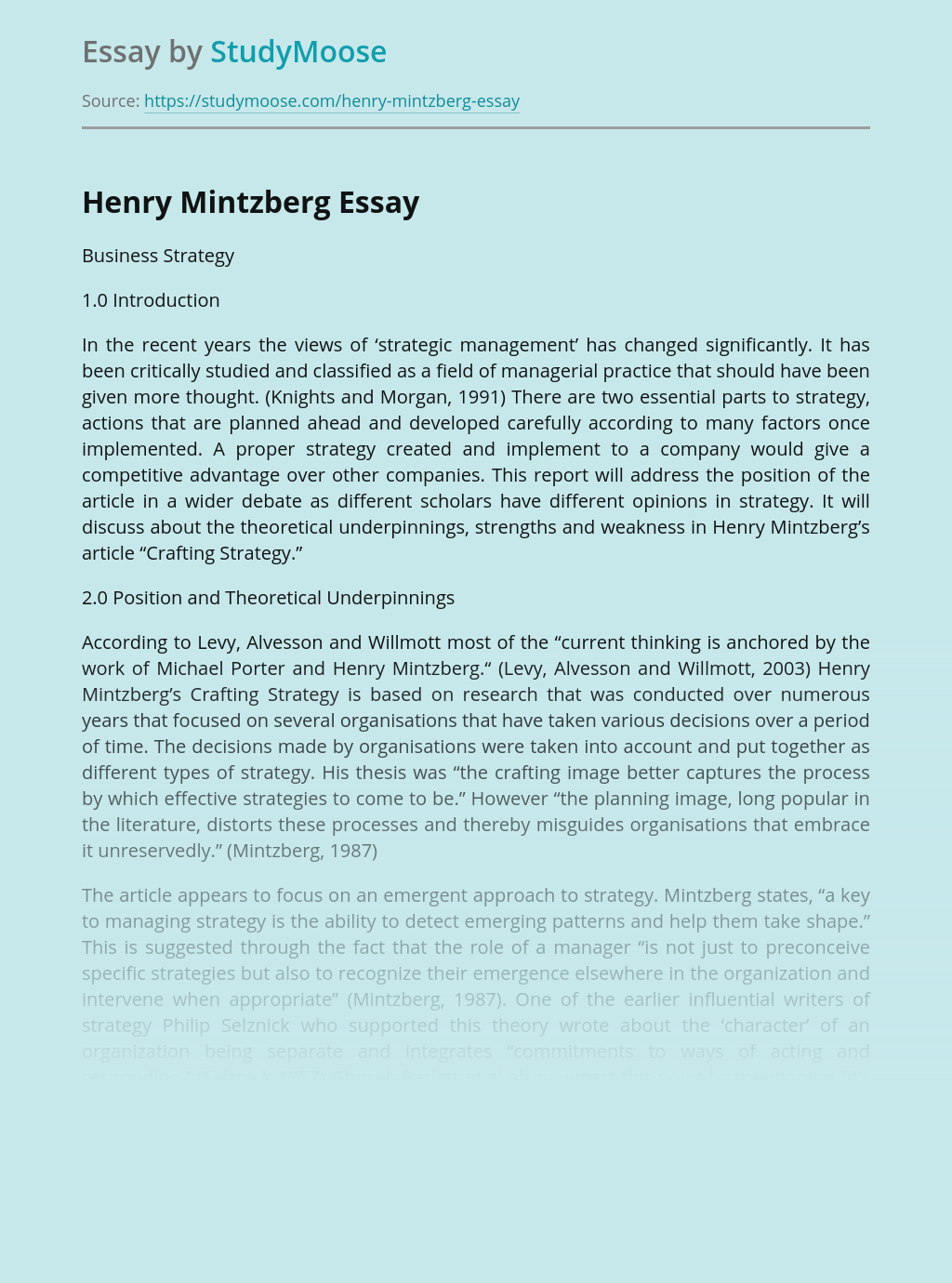 Turn in your highest-quality paper
Get a qualified writer to help you with
“ Henry Mintzberg ”
Get high-quality paper
Helping students since 2015
Stay Safe, Stay Original