In Euripides’s Medea, revenge can lead to destructive actions. This theme is a central part to the tragedy, mostly because it pops up time and time again. Euripides, through the use of motif, makes Medea’s desire for revenge seem conceivable. Not only has Jason left her by marrying Creon’s daughter, but Creon has exiled her from Corinth because she “nourish[es] rancorous ill will toward [Jason and Creusa] whom [he] intends to protect” (Euripides 92). The protagonist is left with ultimately nothing and blames her misfortune on Jason.

Don't use plagiarized sources. Get your custom essay on
“ Hell Hath No Fury Like Medea Scorned ”
Get custom paper
NEW! smart matching with writer

Throughout the play, Medea is described as a very determined and passionate woman who will stop at nothing to serve her sweet revenge. The death motif supports Medea’s theme of revenge because it foreshadows her plans for vengeance. Medea shows the horror that can come when a person lets desire for revenge rule one’s life.

She explains how she wishes death on herself, her enemies, and her children. She could “think of nothing but the death of three persons” (96). This foreshadows her plans for revenge because she eventually kills Creon, his daughter, and her own children, leaving Jason with nothing. Medea’s plan for revenge starts with her children delivering a golden wreath and cloak that is cursed to burn the wearer’s body to death to Jason’s new wife Creusa.

This leads to not only the death of Creusa, but also her father, Creon.

Although Medea has caused much damage and havoc, her vengeance does not stop there. She wants Jason “crushed, boneless, and crawling,” and she wants to sever all ties with him (119). She claims that “as long as [my children] live; I shall be mixed with him” (120). This brings her to her final and most destructive act of revenge: she kills her own children therefore leaving Jason with no wife or power.

Ultimately, Medea’s theme of revenge is supported throughout the tragedy and ends with Medea coming out victorious yet left with nothing to live for in her life. Death is brought upon multiple characters and is mentioned multiple times throughout the play. Euripides, by using theme and motif, sends a clear message that revenge can seem to control one’s meaning of life and leave a person empty and with nothing except for a rancorous spirit. Medea ends with the protagonist exiting, carrying her dead boys with no home, family, or a reason to live. The protagonist’s need for revenge leads to irreversible destructive actions that not only leave Jason with nothing, but Medea as well. 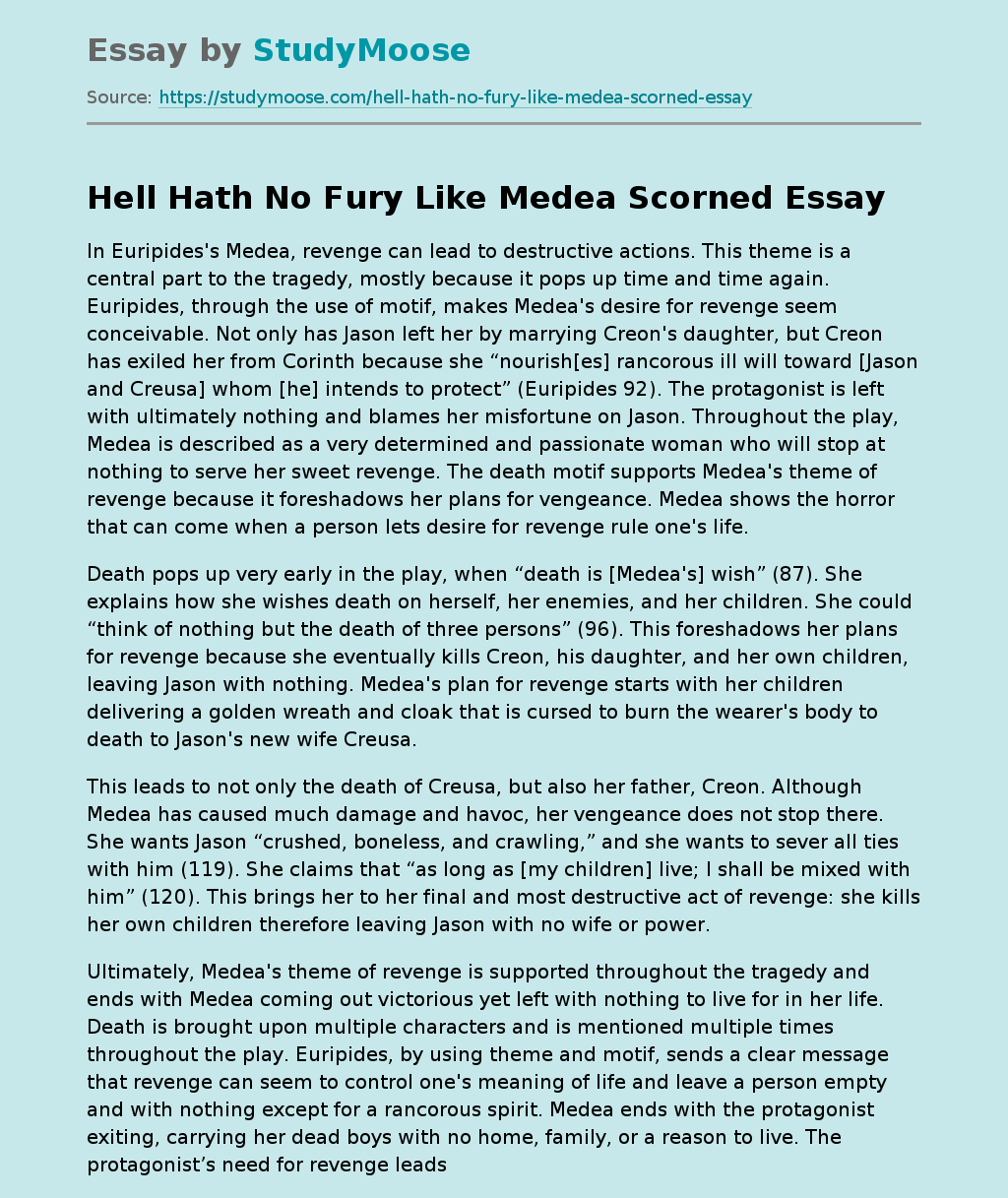