Ans.1: Helen Bower’s new plan isn’t deemed to be much successful. Helen doesn’t consider her employees anything more than just workers. Due to this approach of hers, she hasn’t been able to negotiate with her employees in the right manner to get efficient performance. Even the consultant appointed by her is concerned about her approach and advises her to employ the same methods of dealing with employees, as her father did in the past. Even then, she fails to understand and accept this and decides a new plan i.

Don't use plagiarized sources. Get your custom essay on
“ Helen’s dilemma ”
Get custom paper
NEW! smart matching with writer

e. that every worker who fails to improve his productivity by 10% will have to face an equal pay cut. This plan of Helen isn’t going to help solve the situation anyhow and would only lead to resentment amongst the employees. These employees won’t be at all happy with this decision as they’re expected to do more strenuous hard work even though nothing is being done for their welfare and improvement in working condition; rather all their benefits are being actually curtailed.

As a result, the overall productivity would suffer and Bowers Co. would be unable to compete with Japanese firms.

Ans.2: The biggest challenge that Helen faces is to retain the support of her employees. Helen’s approach of considering her employees as just ‘Hired Help’ isn’t paying her well as all the policies she creates go against the welfare of her employees and thus, the productivity of the organization is getting compromised. If the employees aren’t looked after, they would feel alienated which would ultimately lead to lower levels of productivity and thus, Helen would find it difficult to cope up from the external competition from Japanese firms and thus, the business won’t be able to sustain for long.

Ans.3: If I were Helen’s consultant,I would make her realize the gravity of the situation which is more alarming than what she might be expecting. I’ll try making her realize the repercussions of her policies which are in complete contrast to the welfare of her employees. I’ll advice her to change her approach towards more liberal methods which focus on the welfare of her employees. Also, I’ll recommend her to apply same techniques which her father applied and make her understand the importance of maintaining cordial relations with the workers and how it would help the Bowers’ Co. 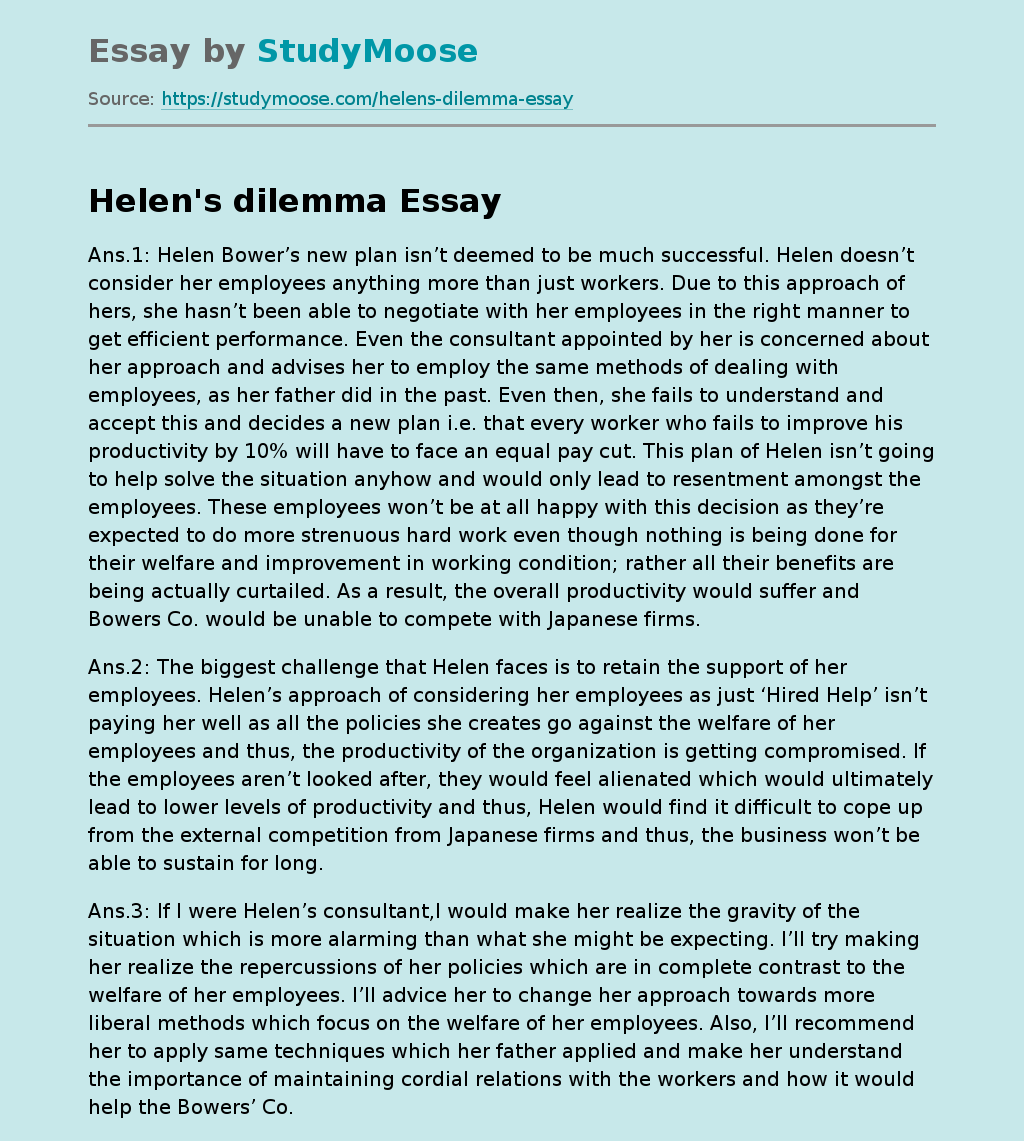