2. Answer: I find it harder to read the play rather than seeing it performed, the reason I say this is because when you read it you read everything including what all the players are supposed to perform. So basically to me it’s like I’m acting like all of the characters at once.

It’s easier for me to comprehend a play when I see one live rather than myself reading one. The advantages of reading the play are that you can reread it if you get lost in one spot but one disadvantage is you have to read every characters part of the play rather than seeing it live and some readers as myself get a little confused when reading it. The advantages of seeing the play are that you get to see the play happening live and actually see what happened rather than what your mind thinks what happened.

Some disadvantages are that you can’t go back into the play if you get lost and also sometimes the plays are not going to be performed very well and just won’t live up to the story of the play.

3. How does Gibson’s depiction of Annie Sullivan affect the way readers view her? What experiences does Annie have that make readers believe in her ability to help Helen Keller?

4. Answer: I felt that he made her very proper and would not give up, Annie has experiences such as getting hit in the face with a doll and losing a tooth. She has many more painful and touching experiences that make her strong. I believe he makes all the readers experience what Annie did to get
Helen to listen to her and that’s what makes us believe in her abilities to help Helen Keller.

6. Describe Helen’s actions after she recognizes that water has a name. What does her behavior show about the beliefs that Annie Sullivan has repeatedly expressed in the play?

Despite objections from Helen’s family (especially her father), Annie believed that Helen could be taught and was very persistent. Helen’s mother, genuinely concerned for her daughter, feared for her and constantly worked against Annie by trying to protect Helen. Still, Annie fought against them and refused to give up and give in. She had been hired to teach Helen that that is what she intended to do. When Helen finally connected the letters ‘W-A-T-E-R’ being spelt into her palms with the actual water flowing over them, it opened her mind to a world of understanding and learning. At that moment, Annie ceased to be Helen’s enemy and, instead, became her teacher
and her very dear friend

At the end of the play, Annie describes herself to Helen as “teacher.” Based on her experiences with Annie, how do you think Helen would define “teacher”? How accurate is Helen’s definition likely to be?

Answer: The reason Helen isn’t going to understand about schools and classrooms, because she’s never experienced them. But if you think about what Annie helped Helen become, I think Helen will have a very good idea about the main idea of a teacher, even if she doesn’t understand the modern concept of a teacher. 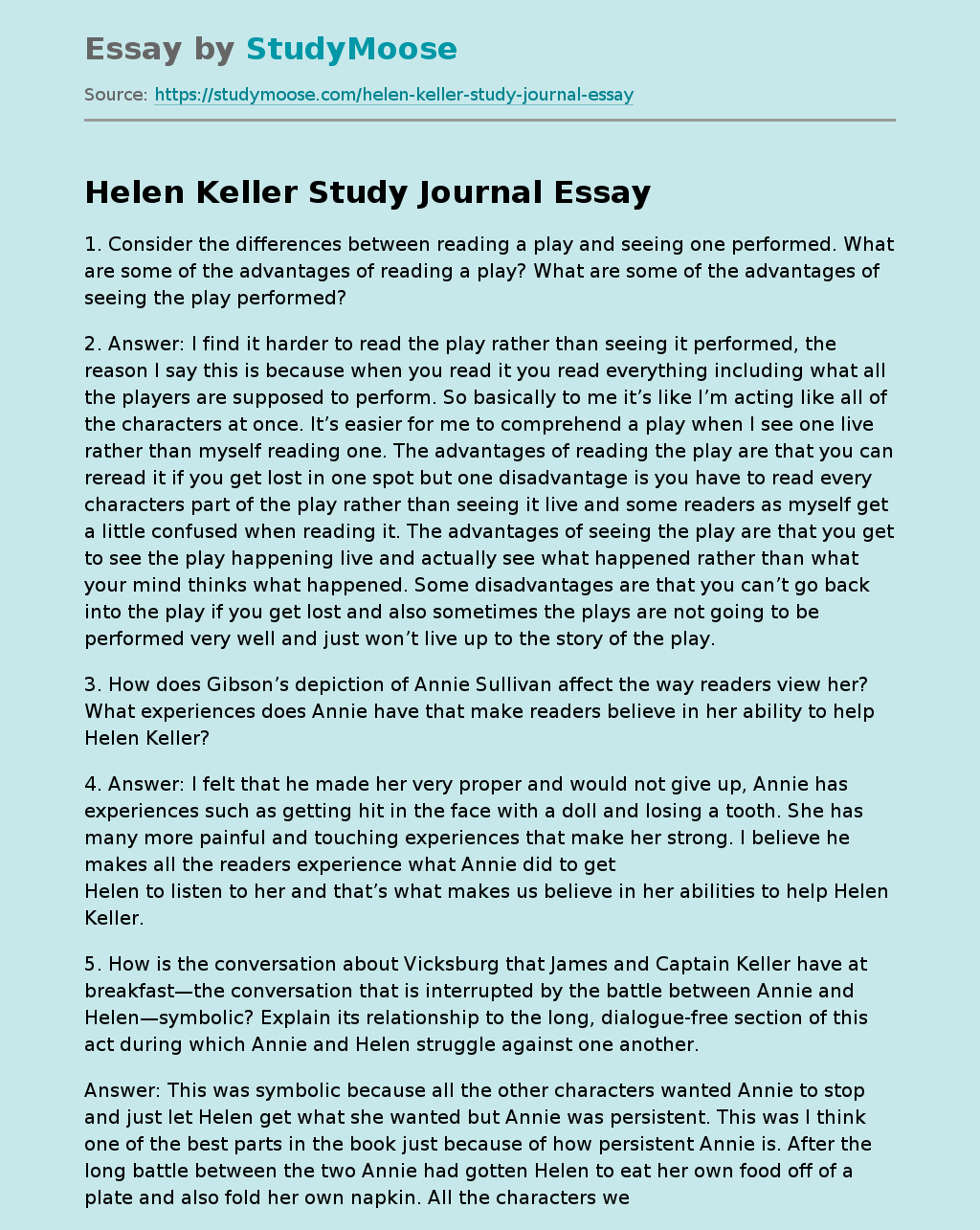