The HeLa cells were discovered in 1951 from Henrietta Lacks. Henrietta Lacks, a poor 30-year old mother, was diagnosed with Epidermiod carcinoma of the cervix stage 1. George Gey, a doctor who worked for Johns Hopkins Hospital in Baltimore, MD, and also someone who was attempting to produce immortal human cells, took a sample of the tumor and later announced to a large television audience that they were “like no other cells. ” As the cells gained more recognition, Dr. Gey named them “HeLa” cells in honor of Mrs.

Don't use plagiarized sources. Get your custom essay on
“ HeLa Cells ”
Get custom paper
NEW! smart matching with writer

Lacks, who later died in October of 1951. HeLa cells became an important tool in medicine, but Henrietta remained unknown.

Twenty years after Mrs. Lacks’ death the family learned of the immortal cells when skeptical scientists investigated the immediate family without consent. For decades after Henrietta’s death, generations of the Lacks family never received any of the profits. Struggling without insurance, the family should have received payments from the very beginning. As a result of the family never being notified of the discovery, the second best choice would be royalty payments.

A royalty payment is when one licenses their work or retains legal ownership and someone else duplicates and sells the item.

Therefore, in return for granting the license, one receives a royalty — a continuing payment based on the percentage of the income for the item. The HeLa cells were used for various reasons extending from the development of Polio vaccines to the treatment drugs of Leukemia. In 2001, five Nobel Prizes were awarded just for the research of HeLa cells.

Over 50 years of non-stop publicity would be hard to stop and retract to make it seem like it never happened. It would be better for the specific companies who were selling the cells illegally to give a small portion to the family.

For example a royalty rate of 5% multiplied by the net sales of $1000 equals a net sales royalty of $50. Correspondingly, most of the Lacks family does not have health insurance. On average, the annual premium is $2,985 for a single person and $6,328 for a family. Companies supporting research for HeLa cells earned billions and still the family has not received compensation. “It’s hard to pinpoint how much money has been made, but it’s a lot of money,” Skloot, author of “The Immortal Life of Henrietta Lacks,” said on behalf of the corruption.

The question still hangs over Johns Hopkins Hospital and those corporations that profit from the use of HeLa cells for their research even today, why will they not help Lacks’ family out? Henrietta’s cells have helped millions of people worldwide battling fierce diseases. Ironically, research grants and funding comes from the government whom takes money from taxes, including the Lacks family. A small portion of the billions of income would greatly benefit them for the cell usage, ultimately giving them the recognition and aid they deserve. 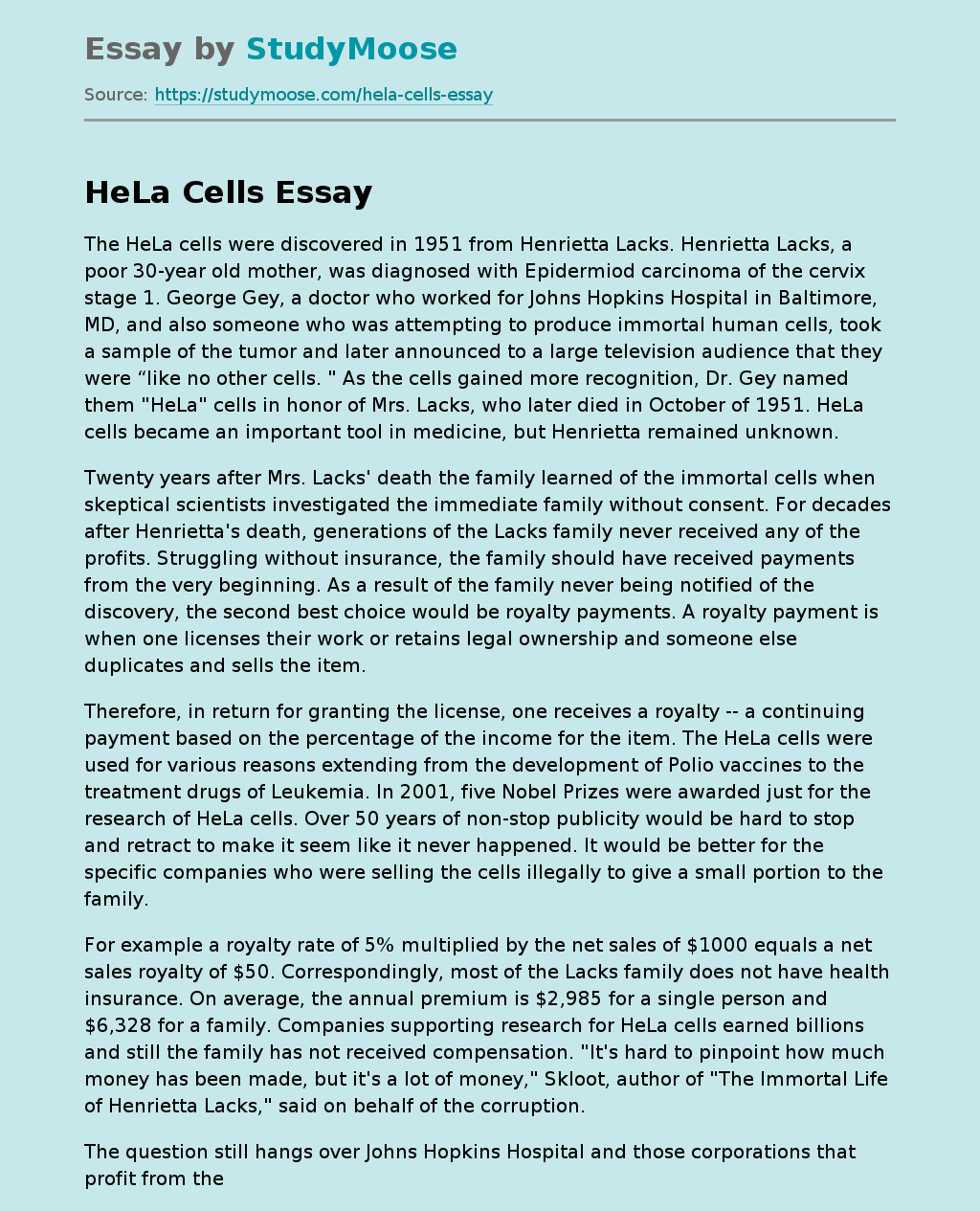