It was a hot March morning in Kolkata in the year 2009. Sanjay K. Jain, —Joint Managing Director of TT Textiles, watched the sunlight stream in through his office windowpane. But his mind was elsewhere, tracking the movements of the Swiss franc (CHF) in the last few months and the world events that had caused them. The Swiss franc had touched 1.17 CHF/US$ from the previous year’s record of 0.96CHF/US$. That was good news for him. Or was it? The irony of the situation was not lost on him.

Turn in your highest-quality paper
Get a qualified writer to help you with
“ Hedging Currency Risk at TT Textiles ”
Get high-quality paper
NEW! AI matching with writer

Once, the Swiss had franc barely figured among all the different currencies that vied for his attention in the normal course of things. Yet, lately, it was the movement of the CHF that weighed on his mind most heavily.

As an exporter to more than 30 countries, TT Textiles was no newcomer to the area of currency risk. TT Textiles usually used forwards to manage currency risks. However, during 2006-07, when the INR was expected to appreciate to an unprecedented high of 35 INR/US$, the company had entered into a swap deal based on the historical stability of the CHF against the US$.

At the time, the deal had looked relatively safe and very lucrative. However, when the global financial crisis struck in 2008, it started making sizeable mark-to-market losses. Luckily it turned around in 2009 and was no longer in the red. But with three months left on the contract, the big question Jain faced was whether to quit now or hold it till maturity.

The textile and clothing industry in India had traditionally been an export-oriented industry. In 2008, it contributed four per cent to the overall GDP of India and accounted for 14 per cent of the industrial production and 14 per cent of total exports of goods . More importantly, India earned about 27 per cent of its total foreign exchange through textile exports. It was also the second largest employer after agriculture, providing direct employment to 35 million people and indirect employment to 45 million people. In 2008-09, the total sales generated by the textile and clothing sector amounted to US$33.4 billion from the domestic market and US$21.6 billion from exports.

Professor Rajesh Chakrabarti prepared this case solely as a basis for class discussion. This case is not intended to serve as an endorsement, a source of primary data, or an illustration of effective or ineffective management. The author thanks Shashvat Rai and Anurag Sharma from ISB’s PGP Class of 2011 for assisting in the writing of this case. This case was developed under the aegis of the Centre for Teaching, Learning, and Case Development, ISB. Copyright @ 2013 Indian School of Business. The publication may not be digitised, photocopied, or otherwise reproduced, posted or transmitted, without the permission of the Indian School of Business. This document is authorized for use only by Christopher Alt at Clark University until July 2014. Copying or posting is an infringement of copyright. Permissions@hbsp.harvard.edu or 617.783.7860. As a mature industry, the textile industry was marked by relatively low margins  varying from three per cent to 12 per cent depending on where in the value chain a specific company operated.

TT Textiles Limited, the flagship company of the TT Group, was founded in 1978 by the family of Dr. Rikhab Chand Jain. It was India’s first knitwear company to go public. TT Textiles was a vertically integrated textile company with a presence in the entire cotton chain, from fibre to yarn to knitted fabric and garments. It had manufacturing facilities in all the major garment centers Tirupur, Kolkata, Delhi, Varanasi, Saharanpur and Kanpur. It had ginning units in Gondal, Gujarat and branches for cotton in Jalna, Maharashtra. The company’s core businesses were agrocommodity, cotton, yarn, fabric and garments, and its markets were spread all over the world, as shown below (also see Exhibit 1):

Sanjay Jain, an MBA gold medalist from IIM, Ahmedabad and an Associate Member of the Institute of Company Secretaries of India (ACS) and Institute of Cost Accountants of India (AICWA), began his career at ICICI Bank before starting his own brokerage firm, which he later sold. He joined TT Textiles in 2001 and was instrumental in expanding the textile business and setting up the marketing network for raw cotton yarn in over 20 countries around the world. Approximately 75 per cent of TT Textiles’ revenues came from exports, and at any particular point of time, the company had an exposure of roughly US$25 million. The life of a typical export transaction in the industry  particularly of the kind that TT was party to  was less than three months. TT Textiles enjoyed a margin of five to six per cent in its business.

Currency derivative products were relatively new entrants in India. Most Indian companies depended on their banks to hedge currency exposures. In a 2009 newspaper article, Ramesh Kumar, Senior Vice President and Head, Debt and Currency Markets of Asit C. Mehta, explained: This document is authorized for use only by Christopher Alt at Clark University until July 2014. Copying or posting is an infringement of copyright. Permissions@hbsp.harvard.edu or 617.783.7860.

The currency market was one of India’s biggest financial markets, with turnover on the spot and forward markets together yielding around US$12 billion a day in April 2007. Since September 2008, there had been both foreign exchange (forex) forwards as well as futures markets in the country trading the INR-US$. Derivatives on other currencies were not traded. The rupee-dollar forward market was an over-the-counter (OTC) market, the trades on which were settled through the Clearing Corporation of India Ltd (CCIL), which was the clearing house for forex and interest rate trades in India. This minimized the credit risk associated with these agreements in the Indian market.

According to Chakrabarti and De, “In 2006-07, 85,106 forex forward transactions went to CCIL for settlement, with a notional value of US$342 billion. By late 2006, forward market turnover was nudging US$2 billion a day. Foreign institutional investors were able to do transactions on the currency derivatives market that could be characterized as ‘hedging’ of the currency risk exposure on their Indian investment.”

In addition to the domestic rupee-dollar forward market, there was active trading for cash-settled rupee-dollar forwards in Hong Kong, Singapore, Dubai and London on what were termed “nondeliverable forwards” (NDF) markets. For foreign institutional investors who had limited access to the forwards markets on the domestic INR-US$ markets, the NDF market did not suffer from the constraints imposed by capital controls. However, for domestic investors, this led to limited participation by financial institutions of the onshore currency forward market. 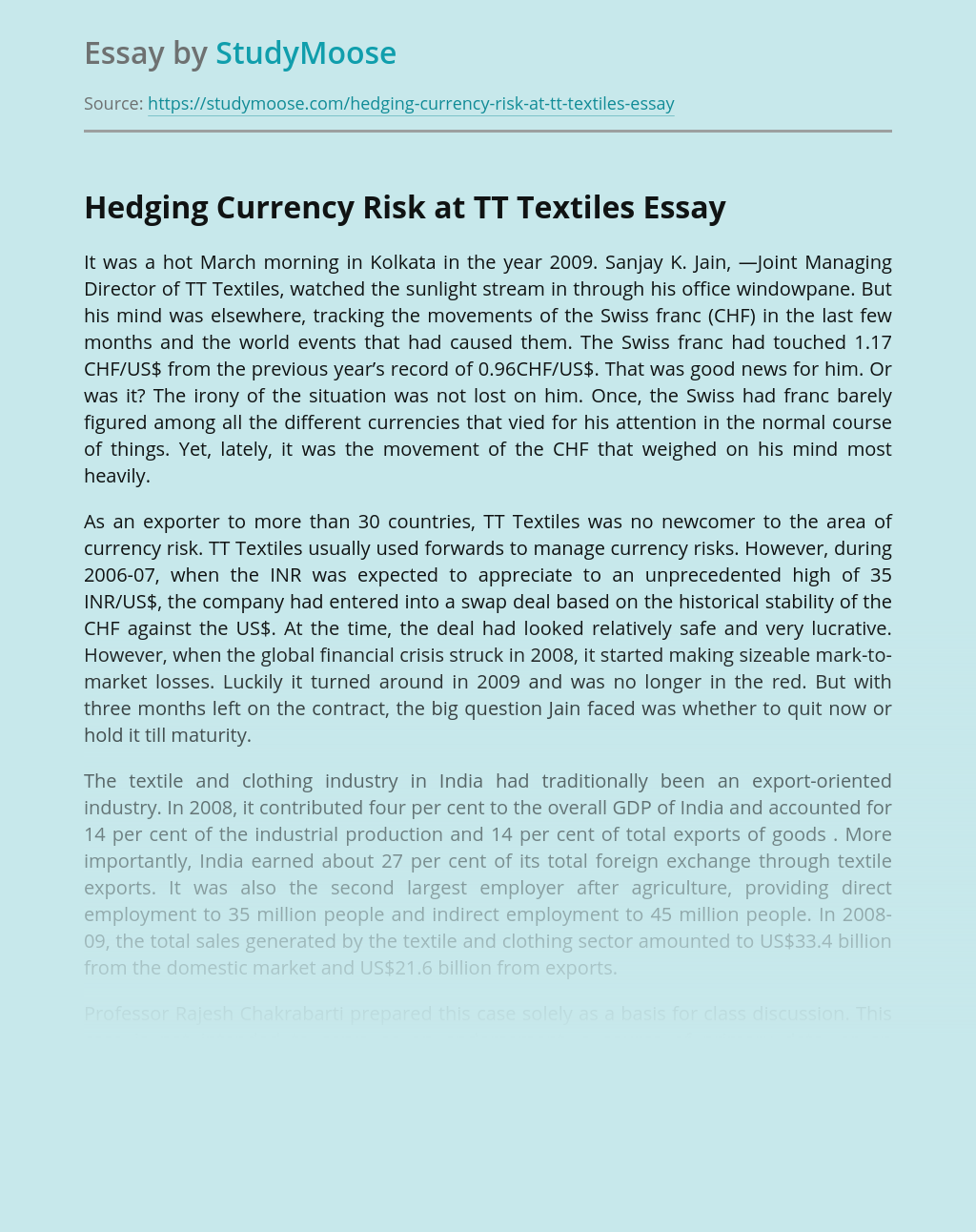 Turn in your highest-quality paper
Get a qualified writer to help you with
“ Hedging Currency Risk at TT Textiles ”
Get high-quality paper
Helping students since 2015
Stay Safe, Stay Original