Heavenly Creatures is based on a true story about two teenage girls who murder one of their mothers in Christchurch, New Zealand. The film, directed by Sir Peter Jackson, uses many techniques in the opening scene to efficiently show how vital this scene is to the film. These techniques include a documentary clip, costume, cinematography and sound. In the beginning of the opening scene, a documentary clip is used to introduce us to the town of Christchurch, New Zealand. The director uses this to show us how seemingly perfect the town of Christchurch was.

In the clip it includes appealing imagery of flowers, gardens, lakes and schools. Accompanied with joyful music, Christchurch is presented to be the idyllic town. Described as a “quiet haven,” the audience become aware of how unlikely and implausible it would have been at the time for two teenage girls to commit a brutal murder against one of their mothers.

The clip is used to create juxtaposition and shock the audience and to illustrate how alarming it would have been in the 1950’s for a murder of this nature to have occurred.

Jackson wanted us to see the situation through the eyes of the people of Christchurch in the 1950’s – it would have been completely out of character for their town, causing quite a scandal. Therefore the media, at the time, would have had a field day. The media were quick to accuse the girls of being “lesbian school girl killers,” the girls became far more outcast than they already were.

They were essentially the villains of the town. Jackson said up until the murder, he had tried to portray the girls from a sympathetic point of view. They were misunderstood creatures, exiled from their peers. The cinematography is used very effectively in the opening scene of “Heavenly Creatures.”

An example of cinematography in the scene is when we see shots of the girls’ legs running up a path. They are covered in blood and screaming. This is paralleled with another shot of the girls’ legs, but this time they are running towards Juliet’s parents, on a boat. The next shot shows the girls both yelling “Mummy” as they get closer to Juliet’s mother. These shots show the girls are running from reality to fantasy. The fantasy scene where they are running towards Juliet’s mother shows that the girls desired to be sisters. Pauline would have done anything to be a part of the Hulme family, including killing her own mother.

The director wanted the audience to see how much of an intense relationship Juliet Hulme and Pauline Parker had- they killed someone in an attempt to stay together. The black and white colouring on the boat scene represents the girls’ fantasy, and how it was not real. The director also uses establishing shots to introduce us to the two main characters. We see Pauline exit from a shed-like house and jump down from over a fence. Her hair is unkempt, and she seems to be unhappy. Later in the scene when Pauline has arrived at school, there is a tracking shot of her walking down a school corridor. She seems awkward, and as she walks past her school peers she seems outcast. When people greet her, she would half-heartedly reply. The director wants us to see that Pauline does not come from a rich family, and to show she is quite different than the rest of her peers. Juliet, however, is first introduced with a shot of her travelling in a flash car, and later an establishing shot of her with her perfectly tidy hair and uniform as she is being introduced to the French class.

The director shows that she comes from a wealthy and respectable background. When Juliet outsmarts the French teacher and is not afraid to speak up for herself, the audience is shown that Juliet, as well as Pauline, stands out from the rest of the class. The girls together were outsiders, and became fast friends because of this. Costume is also used skilfully in “Heavenly Creatures.” In the majority of the opening scene we see the girls, Pauline and Juliet, dressed in their identical school uniforms. As the school gathers for their morning assembly, they sing school hymns. High angle shots show all the girls in their identical uniforms and haircuts. The director wants us to realise that in a girl’s school in the 1950s, individuality was not widely accepted. The girls were expected to be well behaved, polite and obliging. Every girl is the scene is singing and looking relatively happy – except for Pauline. Though she is dressed correctly from top to toe in her black leather shoes and white socks, her blue school-girl uniform dress and her short hair, Pauline stands out from the crowd. She is not singing the hymn and looks bored and sullen. Her hair is also far more dark and unruly than the rest of the girls around her. The director wants to show that Pauline is not just the average school girl, and she detests being in unison with everyone else, as she desires to be unique.

Pauline and Juliet both had the desire to be unique, to stand out from the crowd with their own ideas and own opinions, but that was not socially acceptable in their society or school. People, including the girls’ own family looked down on them for creating their fantasies and imaginary worlds. They did not fit in with their society in the 1950s. Expertly crafted in the “Heavenly Creatures” opening scene is the soundtrack. During the documentary clip, the music playing is cheerful and happy. This is because the clip is showing Christchurch to be a beautiful and harmonious place. The music helps to create the illusion that everything in the world of Christchurch is perfect. But as the scene transitions from the documentary clip to the actual story line, the music becomes dark and almost menacing.

The director uses this to show that Christchurch is hiding a daunting side to it; this side involves deluded and murderous young girls. The music also creates tension which could be linked to how the outside world of Christchurch at the time were feeling – the shock of the murder case was startling, and the audience lives this too, through use of music. The director also wants to see past what Christchurch looks like on the outside, and realise that underneath, the town has damaged and scared parts, just as every other town does. The town of Christchurch has both good and bad people who do good and bad things. The harmonious music and the dark music is a way of symbolising the town and the people who live in it. 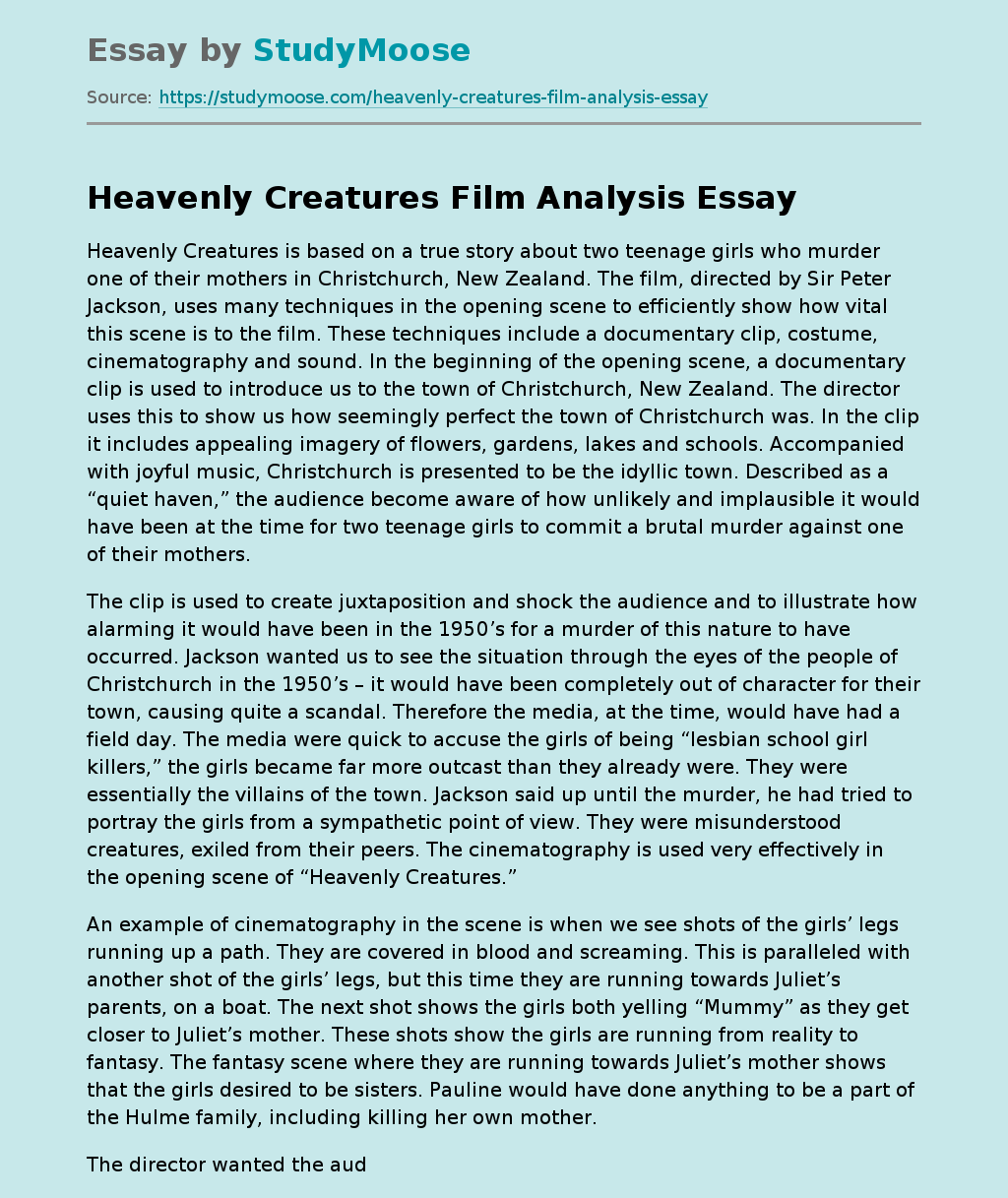