How Heathcliff is represented in Chapters 13 & 14 in the book Wuthering Heights?

Heathcliffs character until chapters thirteen and fourteen in the text has been described and portrayed as quite a normal person but also is very deep and has a lot of emotions and feelings deep down, this I think reflects about the disturbed upbringing he had. Part of his upbringing was of people rejecting him for what he was, for example towards the beginning of the novel Catherine comments about Hindley Earnshaw “Hindley calls him a vagabond, and won’t let him sit with us, or eat with us any more, he and I must not play together, … e threatens that he will turn him out if we break his orders” Having these sort of people around you when you are growing up it is almost certain that this will have some effect as to the outcome of Heathcliff when he is an adult, but sop far he seems to be keeping himself to himself.

Don't use plagiarized sources. Get your custom essay on
“ How Heathcliff is represented in Chapters 13 & 14 in the book Wuthering Heights? ”
Get custom paper
NEW! smart matching with writer

Even so in the novel to isn’t until we start to read chapters thirteen that Heathcliffs starts to open up a bit and reveal his true colours to the reader, as if he wants to let go of some of that hatred.

When Heathcliff arrives back the inhabitants of Wuthering Heights are not expecting to see him return back with firstly a wife and secondly with the intention of residing at the Heights. Only one person at the Heights is expecting him to return ‘It’s well the hellish villain has kept to his word’. This suggests that he has something that he is keeping from Isabella, from reading the quote it sounds as if he is unreliable and that he has not kept his word before.

This could have something to do with when earlier on in the novel Heathcliff moves between Wuthering Heights and Thrushcross Grange quite a few times.

With the evidence in the paragraph and in the book it could suggest that there is something that Heathcliff is being faced with a problem and can’t handle it so he moves out, when the problem has blown over it seems that Heathcliff just swans back into the other residence. Once it is established that Heathcliff and Isabella are going to stop and live, for the time being, in Wuthering Heights Isabella fells that there is an atmosphere of fear within the Heights.

It is as if since Heathcliff has moved back in they fear what he might do. … despair at finding nobody who could or would be my ally against Heathcliff! “. The novel is now suggesting that Heathcliff is violent or aggressive to the people at the Heights, it seems strange that although there is more than one person within the Heights they won’t gang up on Heathcliff and try to resolve the issue that is causing this atmosphere around the house. When Isabella decides to go to bed the obvious place to go would be the bedroom that Isabella and Heathcliff would share.

This is the part of the novel where we are directly exposed to Heathcliffs more aggressive side to his personality. “-that he had the key of our room in his pocket. The adjective our gave mortal offence. He swore it was not or never should be mine;… “. Now there has to be something that Heathcliff is hiding. If we bare in mind that Heathcliff and Isabella have only been husband and wife for no even 24 hours and they are already having a disagreement. When we compared the novel to the film version of Wuthering Heights we were led to believe that Heathcliff was a wife beater.

The thing that strikes me as being strange is that it isn’t as if the disagreement was over something really big it only comes down to wanting the key to the bedroom so she can go to sleep. This shows us, the reader, that Heathcliff can change very quickly. It wasn’t until Isabella challenged Heathcliff about why she couldn’t have the key to the bedroom that Heathcliff violently erupted and lashed out at Isabella. This could conclude into to things either he doesn’t like his chosen wife and just doesn’t want her in the same bedroom as himself or that he has something in the bedroom that he doesn’t want Isabella to see.

Whichever conclusion for his actions we can draw it is clear that he isn’t that nicer person to let his wife, not even for one night, sleep in the same room as him. Reading on through the text it is becoming apparent that the proprietor, Mr Hindley Earnshaw has a vendetta against Heathcliff this comes to light when he tells Isabella. “.. I cannot resist going upstairs with this every night (a gun), and trying his door. If I once find it open, he’s done for… when the time comes, not all the angels in heaven shall save him! “.

There must be a very dark secret for someone to feel that much hatred for one person. It seems that there isn’t much of a reason that I can pick out from the text, the reason that may provoke the feelings of Mr Earnshaw is that he refers to ‘I will have it back: and I’ll have his gold: and then his blood… “, These are some very strong emotions that one person can have for another without a valid reason although from looking at the evidence about Heathcliffs upbringing I would have said that it would have been the other way around with Heathcliff showing hatred towards Hindley.

There has got to be a deeper meaning that the reader is not aware of because looking in the text “should he offer to leave me, he’s a dead man: persuade him to attempt it, and you’re a murderess! Am I to lose all without retrieval? ” so there is obviously some sort of serious disagreement that they must have had otherwise Hindley would have just killed him there and then or let him go but he wants to keep him there as if he wants to feel as if he is in control.

The only obvious disagreement that I can extract from the text is that it is over money, referring to the first quote in the paragraph Hindleys reason has something to do with money and previously in the text Mrs dean and Catherine says how ‘he’s rich enough to live in a finer house than this but he’s very near close handed” Either way it shows that there is some confusion in the text as to who has the most power within the Heights, Heathcliff has power over a lot of people, Catherine can’t find anyone to gang up on Heathcliff, but Hindley is being seen to have a much stronger power over Heathcliff, the gun.

As we have seen from the text there are many different sides to Heathcliff, when Nelly comes to visit Isabella we see how two-faced Heathcliff is. ‘If you have got anything for Isabella (as no doubt you have, Nelly), give it to her. You needn’t make a secret of it: we have no secrets between us. ‘ How can anyone that after what happened with the incident over the bedroom key stand there and say that?

It is suggesting that Heathcliff doesn’t want any of Isabella’s secrets kept from him but when it comes to Isabella wanting to know anything about Heathcliff he becomes very defensive. The part that really threw me was when Heathcliff goes to visit Catherine with Isabella and the topic of conversation turns to Isabella and Heathcliff remarks ‘She degenerates into a mere slut! She is tired of trying to please me, uncommonly early.

You’d hardly credit it but the very morrow of our wedding, she was weeping to go home’ This now shows him in a different light that Heathcliff knows that Isabella is unhappy and does obviously not care about her feelings or what he does to upset her feelings. As I start to draw my essay to a close I can come to a conclusion as to how Heathcliff is represented. We have seen him in lots of different situations and seem how he has handled and coped with them and the effect that it has on other people.

We have experienced him as being uncertain as to where to reside and his unpredictability, how he has a sense of authority over inhabitants of the Heights but having to deal with Hindley. Later on we see how reluctant he is to share with his wife and how two faced he can be. As I was gathering my evidence to produce the essay I can see a clear link that is common within all of the representations I have included in my essay. The link is that all of the evidence could have had something to do with the upbringing that he received.

If we take the ‘wanting authority’ this can be linked to when he was being brought up, Hindley had the say as to who did what and who could play with Heathcliff and it is as if Heathcliff wants to have some power as he has just been pushed around from person to person during his upbringing. The incident with the bedroom key could have something to do with him not being able to trust anyone as again when he was being brought up he didn’t have one person that he could trust and that would be there for him so Heathcliff is finding it hard to let someone new into his life.

How Heathcliff is represented in Chapters 13 & 14 in the book Wuthering Heights?. (2020, Jun 02). Retrieved from http://studymoose.com/heathcliff-represented-chapters-13-14-book-wuthering-heights-new-essay 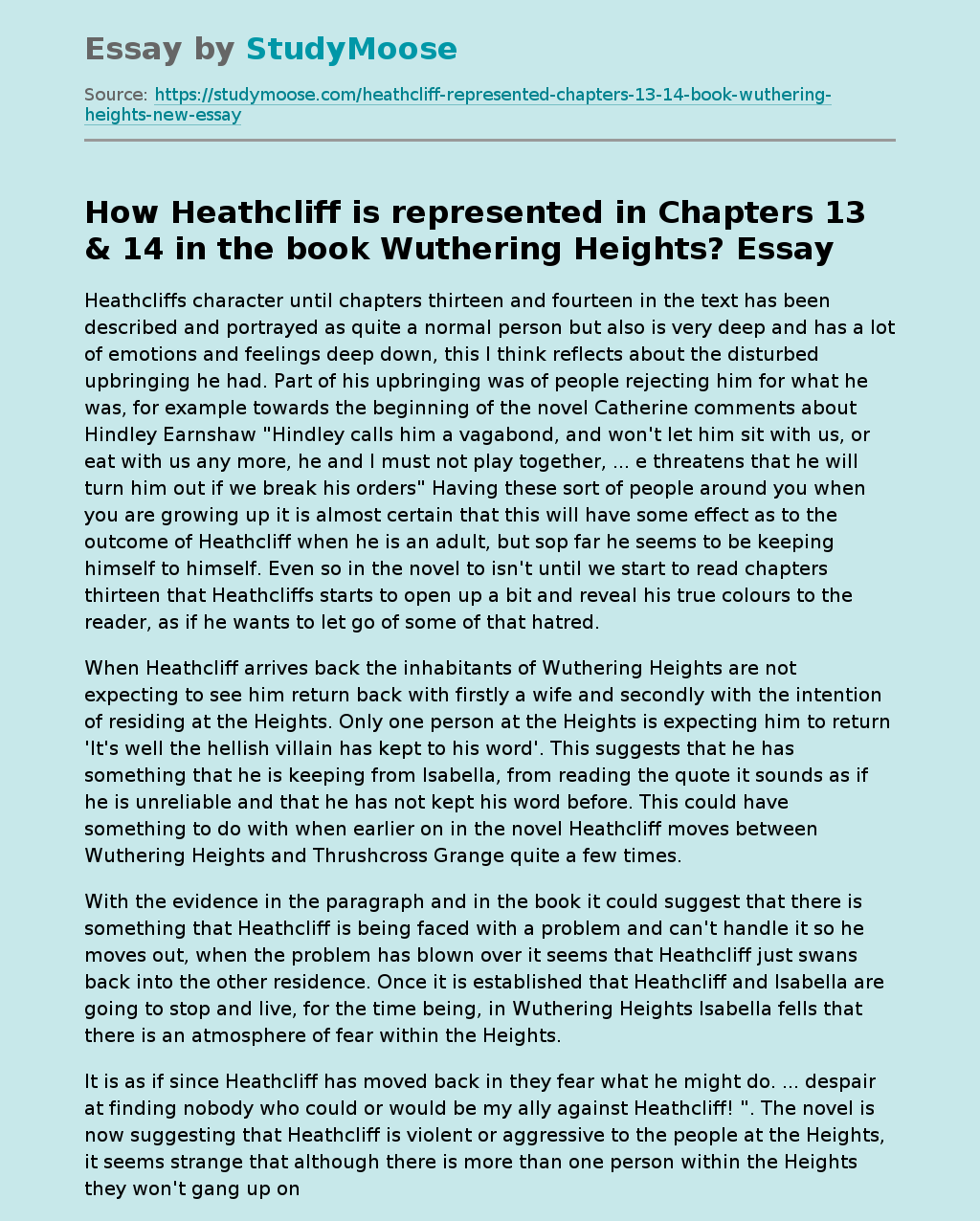