"Heart of Darkness" on European Colonialism

Heart of Darkness written by Joseph Conrad is about imperialism. A man named Charlie Marlow tells the story of how he traveled into Africa and met a man named Kurtz who is working for a European trading company. Kurtz went into the jungle to find ivory, but also apparently with the ideas of bringing European civilization to Africans. The Europeans viewed the Africans as animals. But Kurtz’s idea failed and he became an animal himself. Joseph Conrad attacks colonialism through both the Africans and the Europeans views on Marlow’s journey.

Don't use plagiarized sources. Get your custom essay on
“ “Heart of Darkness” on European Colonialism ”
Get custom paper
NEW! smart matching with writer

He reveals the horrors of colonialism by characterization, symbolism, and diction in the story.

The story begins with some men laying around on a yacht waiting for the tide to settle down on a river. One of the men, Charlie Marlow imagines what it was like when the area was first explored 1900 years ago, before it was civilized. The thought reminds him of the time he traveled to Africa, which was very uncivilized.

He found a job with the European trading company, which was on a mission to go to the heart of Africa to export ivory. When he arrives, all he sees is men who have been taken captive and put to work. The company calls them “criminals” but they’re basically slaves. While down there he meets Kurtz, who he quickly learns is looked upon as a god to the Africans.

Marlow took a trip up the river, he is joined by the manager and 20 enlisted Africans who Marlow says are cannibals.

During the trip they pass tribal villages who shout and jump around when they see the boat. Marlow got excited about that because he saw the humanity he shared with these people. He says in a racist way, that even though he is civilized in Europe, he could feel a part in himself responding to their shouts. Marlow had found a report written by Kurtz saying the white man, because he is so developed must appear to the “animals” as a god. With that authority, the white man can civilize them. The plan had failed and Kurtz died. Marlow returned to London. The narrator says that the river leads to darkness, suggesting that this civilized London isn’t too different the jungle. The book points out how false the European idea was of civilizing Africa was. The Europeans brutalized and enslaved the Africans. In the end, no one looks good except for Marlow who had an opinion on everything he had seen. This experience had changed Marlow. He is a very honest narrator when telling about his travels full of pain and horror on human existence.

Another way Joseph Conrad reveals the horrors of colonialism is threw symbolism. He uses symbolism to show the concepts of colonialism. He starts off with using fog around and along the Congo River. The fog symbolizes darkness within the community of the Congo River. The fog is so bad that it throws off Marlow, makes him disoriented and he does not remember where he is going. Then, Marlow gets torn about his duty as a sailor. He sees the world around him and it’s cruelty within his surroundings. He feels the world has defeated him. His principals are the only thing that will guide him and get him threw his journey. The beginning of this story is all about going to Africa to collect ivory. Ivory is just another symbol. Ivory symbolizes the greed and the destructive nature of men. The people who work for the company are so obsessed with getting ivory that they forget their civilized ways. The “Whited Sepulchre” is another example of symbolism. The “White Sepulchure” is where the company is located. The Sepulchre implies death and confinement. It is governed by social principles that allow cruelty, and dehumanization. The congo was notorious for violence. On the outside it showed something beautiful but on the inside is where you see the cruelty. Women are another symbol in Heart of Darkness. Marlow frequently claimed throughout the story that women are the keepers of illusions. These illusions are the start of fictions that justify the colonial expansion. Women are made objects in which men can show their own success and status. Kurtz is another symbol. He shows a man’s dark side and what can happen when it consumes you completely. Kurtz, being at the Congo for so long had drifted him away from all ties to civilization. He got crazy with power and went crazy. Finally, the river is a symbol. The congo river is what drives the Europeans to Africa. It allows the white men to always be seperate. The river in the story makes it seem like it is trying to get rid of the European men. The travel up the river was very difficult and slow but the travels back down the river towards civilization were easy and smooth sailing.

Finally, Joseph Conrad attacks colonialism by revealing it’s horrors through diction. Joseph Conrad’s diction is dark. In the beginning of the story Marlow and his crew were stuck on the river because of the tide. They had nothing better to do than watch their surroundings. “The air was dark above Gravesend, and farther back still seemed condensed into a mournful gloom, brooding motionless over the biggest, and the greatest, town on earth” (1). Joseph Conrad’s description of the air being dark and mournful is an example of melancholy, which is used a lot throughout Heart of Darkness. Conrad also has very good imagery which sets the seen for the reader. It makes you see the darkness and makes you feel as if you are in the era the book was taking place. On page 1, the author Joseph Conrad gives a description of Marlow. “Marlow sat crossed-legged right aft, leaning against the mizzen-mast. He had sunken cheeks, a yellow complexion, a straight back, an ascetic aspect, and, with his arms dropped, the palms of hands outwards, resembled an idol”. Readers can see that Conrad is very straightforward with writing his imagery. These are very realistic and make you envision the story as if you were there watching it while it all went down. Joseph conrad uses his diction to not only impact the novel, but to also get the horrors of colonialism shown. When you’re reading the story you can just tell how the author feels about it. His use on words, characterization, symbolism, and diction all make you see the horrors of colonialism.

In conclusion, the European colonialism along the Congo River has brought nothing but pain and suffering to the natives. We are shown through the eyes of Marlow on his journey and the negative effects that colonialism has caused. The Congo was a place were Europeans felt it was right for exploration. They were disgusting and dehumanized human beings.

"Heart of Darkness" on European Colonialism. (2021, Aug 06). Retrieved from https://studymoose.com/heart-of-darkness-on-european-colonialism-essay 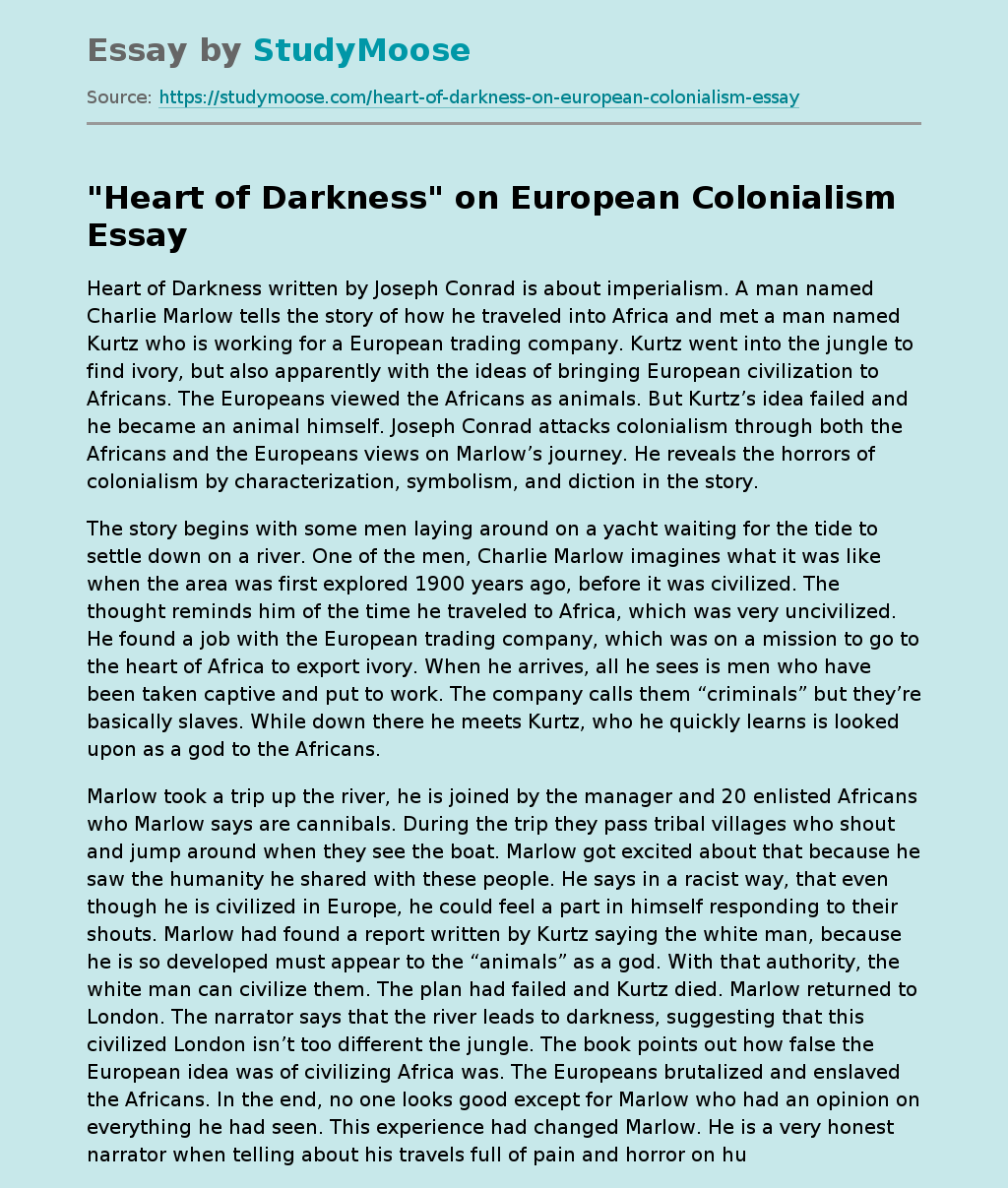