Marginalization of the Native American population is a result of colonialism; they were considered to be ignorant and hostiles by the “White” settlers, forced to live on reservations, lost their culture and values through assimilation and stripped of their rights in society. Segregation, Social Darwinism, and other discriminatory practices have led to the marginalization of Native Americans, resulting in the lowest standard of living in the United States, high rates of alcoholism, and a significant loss of heritage as they are cut off from native rituals and language and encouraged to meld into the cultural expectations of mainstream America.

Don't use plagiarized sources. Get your custom essay on
“ Health Promotions Among Diverse Populations ”
Get custom paper
NEW! smart matching with writer

In this document of research, I will compare my findings on Native American Health with the general population at this time. I will also define what “health” means to this population. Also included in this research will be examples of three levels of preventative health promotion and health disparities for this unique minority.

The prevalence of unemployment was much higher among blacks, Hispanics, and American Indian/ Alaska Natives than among whites in 2006 and 2010.

In 2010, unemployed adults were much less likely than employed adults to report their health as excellent or very good. During 1999-2008, both life expectancy and expected years of life free of activity limitations caused by chronic conditions were signiﬁcantly greater for females than for males and for whites than for blacks. The percentage of American Indians and Alaska Natives who lacked health insurance in 2013 was 26.9%. Although while some Native American Tribes may benefit financially because of the casinos, most have the worst standard of living in the

United States. Between the poverty and unemployment, life on the reservations is unbearable for many tribe members.

Marginalization of the Native Americans is a result of colonialism; they were considered to be ignorant and hostiles by the “White” settlers, forced to live on reservations, lost their culture and values through assimilation and stripped of their rights in society. Segregation, Social Darwinism, and other discriminatory practices have led to the marginalization of Native Americans, resulting in the lowest standard of living in the United States, high rates of alcoholism, and a significant loss of heritage as they are cut off from native rituals and language and encouraged to meld into the cultural expectations of mainstream America.

Their rate of alcoholism is much higher than the rest of the population and 1 in 10 Native American deaths is alcohol-related,” (Winkel, 2010). Consequently, alcohol has had a great influence on the Native American’s culture. Winkel also states, Researchers over the years have shown that the effects of alcohol on this culture are also due to genetics. Looking from the genetic level, certain ethnic groups have a gene mutation that causes adverse reactions to drinking large amounts of alcohol. Groups that possess this “protective gene” include Chinese and Japanese populations, and it causes them to feel rapid heartbeat, headache, nausea, and extreme drowsiness.

Other groups, including Native Americans, do not possess this gene mutation, consequently reducing the side effects of heavy drinking. (Winkel, 2010) Besides genetics, the environment that one lives in will determine whether they will be an alcoholic or not. Alcoholism often co-exists in Native American communities with other problems like Depression, self-hate, and cultural shame. According to an article in the Las Cruces Sun News, in New Mexico, young people of Native decent commit suicide at twice the national rate. Suicide rates among indigenous Native youth are higher and somewhat triple the rates seen among Anglo youth. (Furlov, B. Paskus, L.) Mental Health is of the highest concern along with the following:

Stroke, Suicide, Nephrosis and chronic Nephrotic Syndrome are in the top ten.

Unfortunately, Influenza and Pneumonia have to be figured into the mix as well.

Perhaps since the time the Europeans first traded alcohol with the Native Americans, it began the downward spiral effect that they are feeling today. It has been said that alcoholism is an epidemic among the Native America. Alcohol is no longer sold on any Reservation due to the issue. The American Indian and Alaska Native people have long experienced lower health status when compared with other Americans. Lower life expectancy and the disproportionate disease burden exist perhaps because of inadequate education, disproportionate poverty, discrimination in the delivery of health services, and cultural differences.

They have a traditional shaman, or herbalist that are spiritual healers. A ritual that Native Americans use is the sweat lodges and stones for purifying the body, mind, and spirit. In addition, rituals that will last weeks or even longer, such as dancing, singing, and sand painting take place at the same time to bring harmony into the soul. Native American doctors also recommend a ritual purification. Purifications are intended to get rid of harmful toxins to the body. It is a holistic approach.

There is a belief that violating tribal laws carries consequences to include mental and physical illness, ongoing bad luck, disability or trauma. Any violations must be made right in order for harmony and good health to be restored. Among Native Americans, the idea remains that the sickness and illness that one experiences is related to a spiritual cause, and in turn creates a disparity between mind, body and spirit. Health is defined by harmony between body, mind, and spirit.

Prevention Focus Areas The best known system of measuring health in the U.S. is Healthy People 2010 (Healthy People 2020 is to be released soon), which contains a total of 467 separate indicators on the health of the country. A small subset of indicators, called Primary, can serve as the roadmap American Indian and Alaskan Native (AI/AN) communities need for assessing current health status, designing and implementing programs to improve health, and evaluating the effectiveness of these programs. What people eat has a powerful impact on their health. Nutrition plays an integral part in many of our most prevalent diseases, including diabetes mellitus, heart disease, stroke, obesity, hyperlipidemia, hypertension, certain cancers (breast and colon, e.g.), and osteoporosis.

The Indian Health Service is working both to improve the health of patients with nutrition related diseases, and to prevent these illnesses in future generations through interventions in schools, community health programs and hospital and clinic based services. Immunizations are one of the most effective disease- prevention tools available today. Thanks to the routine immunization of children, the U.S. has seen a dramatic decrease in a number of vaccine-preventable diseases that used to cause significant illness and even death.

In conclusion, education is the key to helping this populace. Obesity is a large part of the population and exercise promotion along with healthy eating is encouraged. Mental Health is a large affliction associated with Native health and must be recognized when children are young. As Health Care workers we must combine traditional medicine with modern medicine and holistic approach. 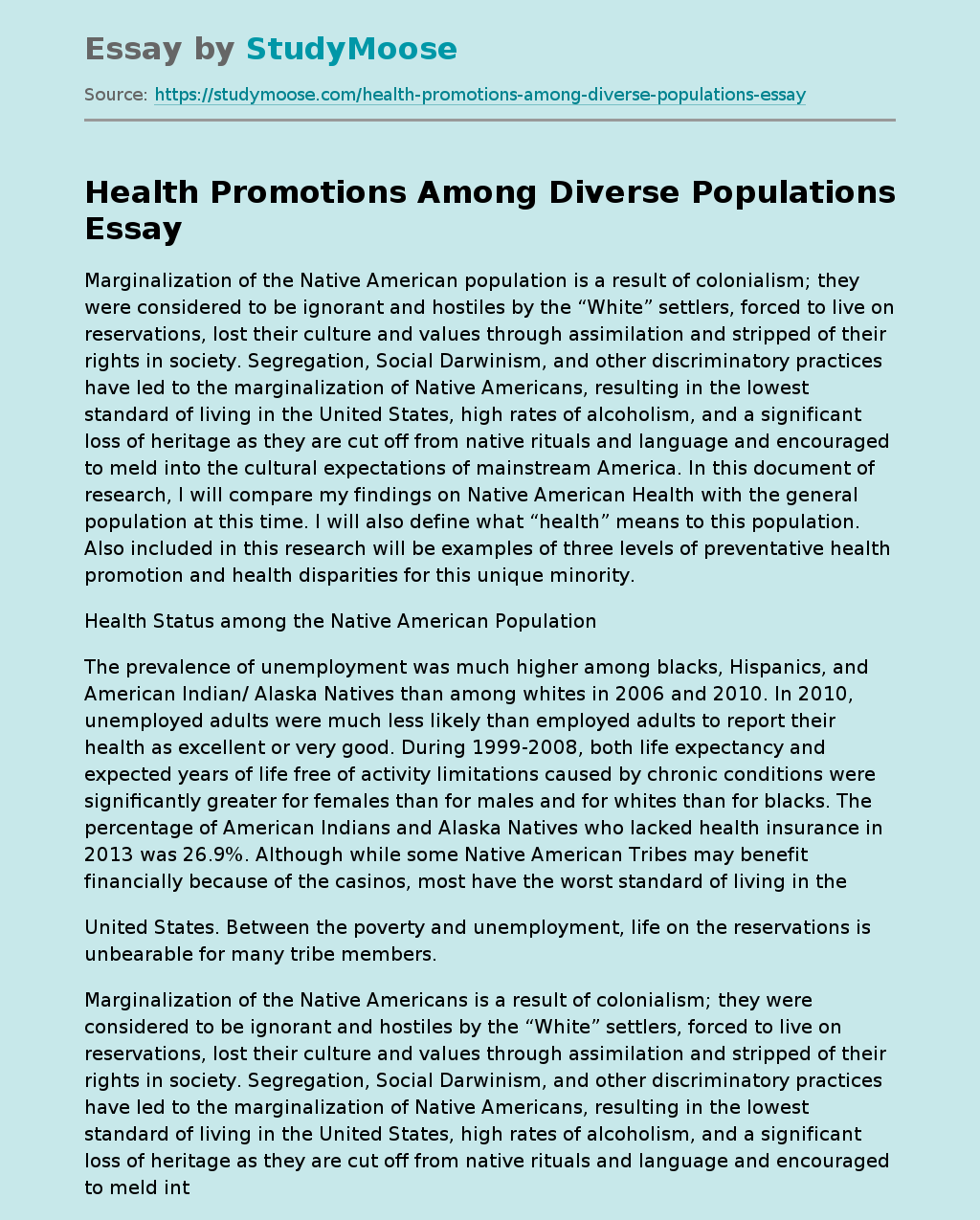