In discussing health promotion among diverse populations, this author has selected the Hispanic population to show health status in regards to the national average. According to the U.

Don't use plagiarized sources. Get your custom essay on
“ Health Promotion among Diverse Populations ”
Get custom paper
NEW! smart matching with writer

S. Census Bureau, as of July 2013, their estimate is that there are around 54 million Hispanics that live in the United States. This represents 17% of the total U.S. population which makes them the largest ethnic minority. It is estimated that by 2060, they will grow to around 128.8 million (31%) of the U.S. population. According to the U.S. Census Bureau in 2012, the Hispanic population of which 23% were in either elementary or high school; and only 6.8% were in college. Also, only about 29.1% lacked health insurance.

Hispanics were 43% more likely not to have health coverage than that of 13% of non-Hispanics who lacked health coverage. According to the CDC (Center of Disease Control), when evaluating the health status that this group perceived themselves by 10.3% of being in fair or poor health. Mortality rates were difficult to compare as the reporting on the ethnic group was not always put on the death certificate.

However, the death rate from Diabetes is 40.5 per 100,000 for Blacks, which is double that for the white population which 19.9 is. The rate for Hispanics is 27.7. Health Disparities/ Barriers

S., 2013). We need to be aware of the disparities of our patient population in order to be able to provide the education and resources needed to improve health promotion and prevention for them.

Some of the disparities among the Hispanic population are education, cost, language, and prevention. In regards to education, a larger percentage that of non-Hispanics did not complete high school and therefore many are unable to read and write adequately to get the information that they need. Also, a high percentage don’t speak English and they are unable to communicate with health givers, especially if there is no one to translate. Since a large percentage has not graduated from high school, they are in low income a job which puts them in less than the federal poverty level, and are more likely to be in high-risk positions.

Also, Hispanics are more likely to be unemployed as compared to non-Hispanics. Due to their low-income, Hispanics are less likely to seek medical attention because of cost. They will provide medical care for their children first and themselves last. Many use home remedies handed down through the generations. With regards to blood pressure control, which could be regulated in a clinic visit, only a small percentage had blood pressure control as compared to non-Hispanics. Barriers to these disparities need to be assessed and interventions need to be developed and implemented to improve health for these populations. Some of the barriers noted were language, income, educational level and cultural beliefs. There are translation tools (phones, translators) available; we just need to utilize what is available. By utilizing these tools, individuals will be more likely to go to the doctor, since they will be able to understand the information given.

However, we as health providers need to be non-judgmental and accepting of these individuals. Financial concerns are a big part, most state that they cannot afford treatments, medications, supplies, and dietary changes. This is due in part that most are below poverty level. By assessing their needs, then researching what programs are available for them. There are medication assistance programs available, some from the hospitals and some from the pharmaceutical companies. Many pharmacies now have $5 and 10$ medications for 30 to 90 days. This can be a major assistance. Transportation can also be a barrier; if they don’t have a way to get to appointments then they don’t get the appropriate follow-up.

Setting up clinics in the community is a way to increase patients making it to appointments. Also, in some communities, public transportation busses will go and pick up patients from their home and take them for appointments and bring them back home. Education is another barrier, with most not finishing high school, they are not able to read and write well or not at all, or not in English. When developing an educational program for these individuals, we need to take into account how they learn and what types of media do we need to use.

There are three approaches to health promotion/ prevention: primary, secondary and tertiary. Primary is considered health promotion and specific ways to prevent illness such as immunizations. Secondary is describes as early diagnosis and treatment. And tertiary is focused on restoring health and rehabilitation if needed. While primary would be beneficial, this author believes that the focus should be on secondary prevention. Providing screening activities such as health fairs, for these individuals can and will lead to early diagnosis. We need to ensure that the Hispanic population are respected and provide them with the tools needed to promote wellness.

Due to high cost of health care and with many not having insurance, most wait till they need to go to the emergency room for care. This practice most likely leads to identifying illness at a later stage and thus requiring more intense therapy to obtain level of wellness. In conclusion, there needs to be trust established partnership in the care between patient, family and health care providers. Also, disparities need to be taken away or at least reduced to be able to provide the best preventable and early care as possible to all. 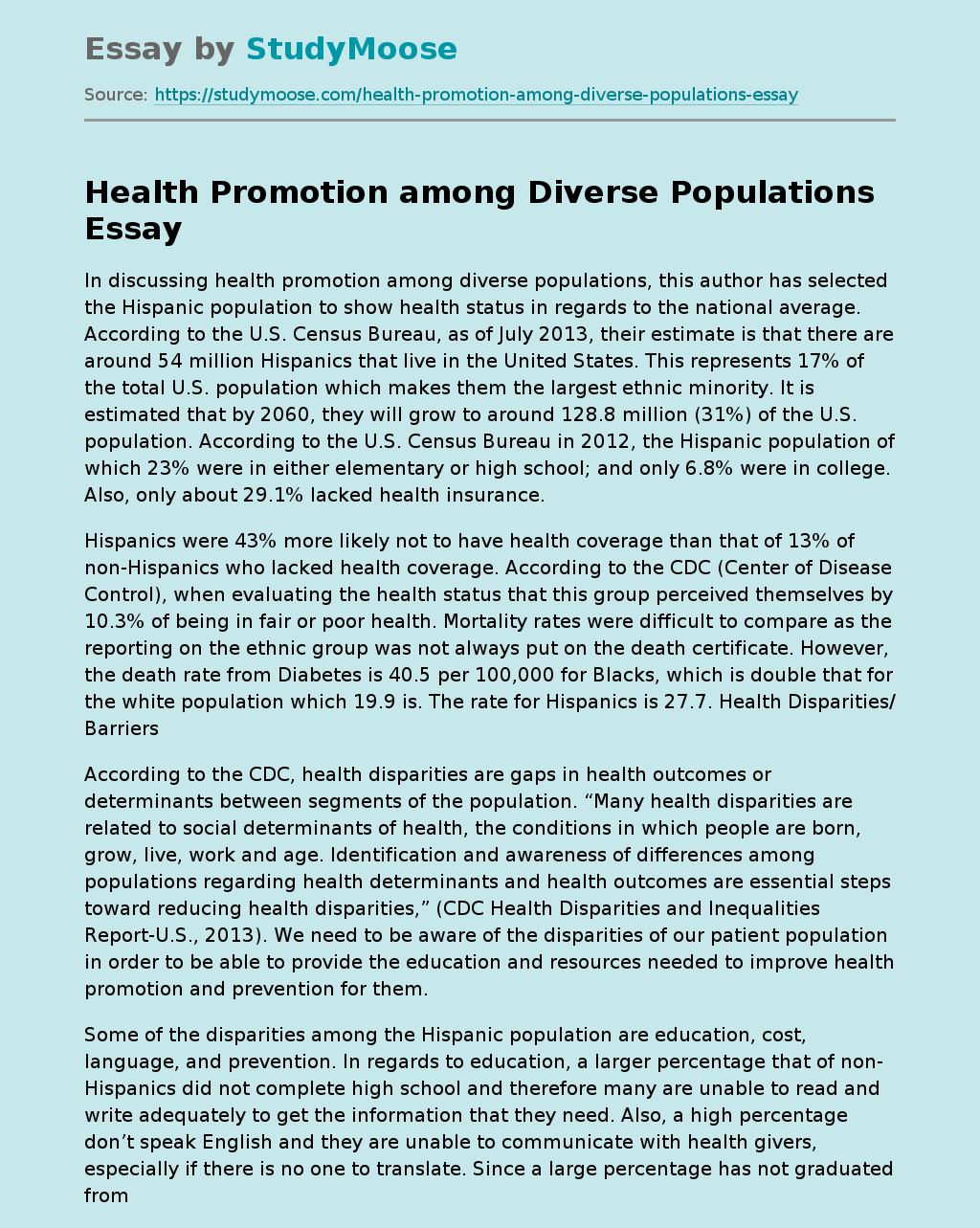