Health Issues in the Philippines

DOH alarm: HIV cases in first-half 2012 exceed full year of 2010 The number of human immunodeficiency virus (HIV) cases during the first half of the year has already surpassed the record for the whole 2010, the Department of Health (DOH) said Friday, underscoring the alarming rise in incidence of the virus that causes the dread disease AIDS.

The bulk of the spike was traced to a rise in male-to-male transmission and the sharing of needles among injecting drug users in Cebu province.

DOH Assistant Secretary Eric Tayag said for the month of June alone, 295 HIV cases were reported to the department, bringing to 1,600 the total number of cases in the first half of 2012.

Don't use plagiarized sources.
Get Your Custom Essay on Health Issues in the Philippines Just from $13,9/Page

This brings the total number of HIV cases in the country to 9,964 since 1984 when the DOH started reporting HIV/AIDS cases.

Men having sex with men make up 87 percent of HIV transmissions recorded in the first six months of the year, with men aged 20-29 making up most of the cases.

While MSM transmission has been the main mode of HIV transmission for a couple of years now, the DOH is particularly alarmed by a dramatic spike of cases involving injecting drug users (IDU) in Cebu City.

“What we’re alarmed about is that for June there were additional cases of injecting drug use or person who inject drugs,” Tayag said. HIV among drug users reached 120 during the first half of the year alone, he added. From 1984 to 2008, there were only 8 HIV cases among drug users.

“You will recall that in 2008 we only had 8 cases, now we have a total of 385 since 1984 when we started reporting HIV,” said Tayag, adding that all 120 HIV cases among IDUs this year were reported in Cebu City.

Tayag admitted that HIV monitoring among drug users in Cebu had stopped for awhile, discouraging people who were injecting drugs from submitting themselves for AIDS testing.

“In this period we stopped monitoring HIV among persons who inject drugs in that part of Cebu. For some time there was no fund so when we did a survey we saw that the number of HIV among drug users has increased,” he said.

Tayag said unlike other drug users in some parts of the country, injecting drug users in Cebu City use regulated medicines. The virus is spread as they share unclean and contaminated needles.

Tayag revealed that the government has started an HIV mapping, where parts of the country are labeled in terms of AIDS risk. Metro Manila, Cebu and Davao are tagged high risk.

Health Issues in the Philippines. (2016, Apr 06). Retrieved from https://studymoose.com/health-issues-in-the-philippines-essay 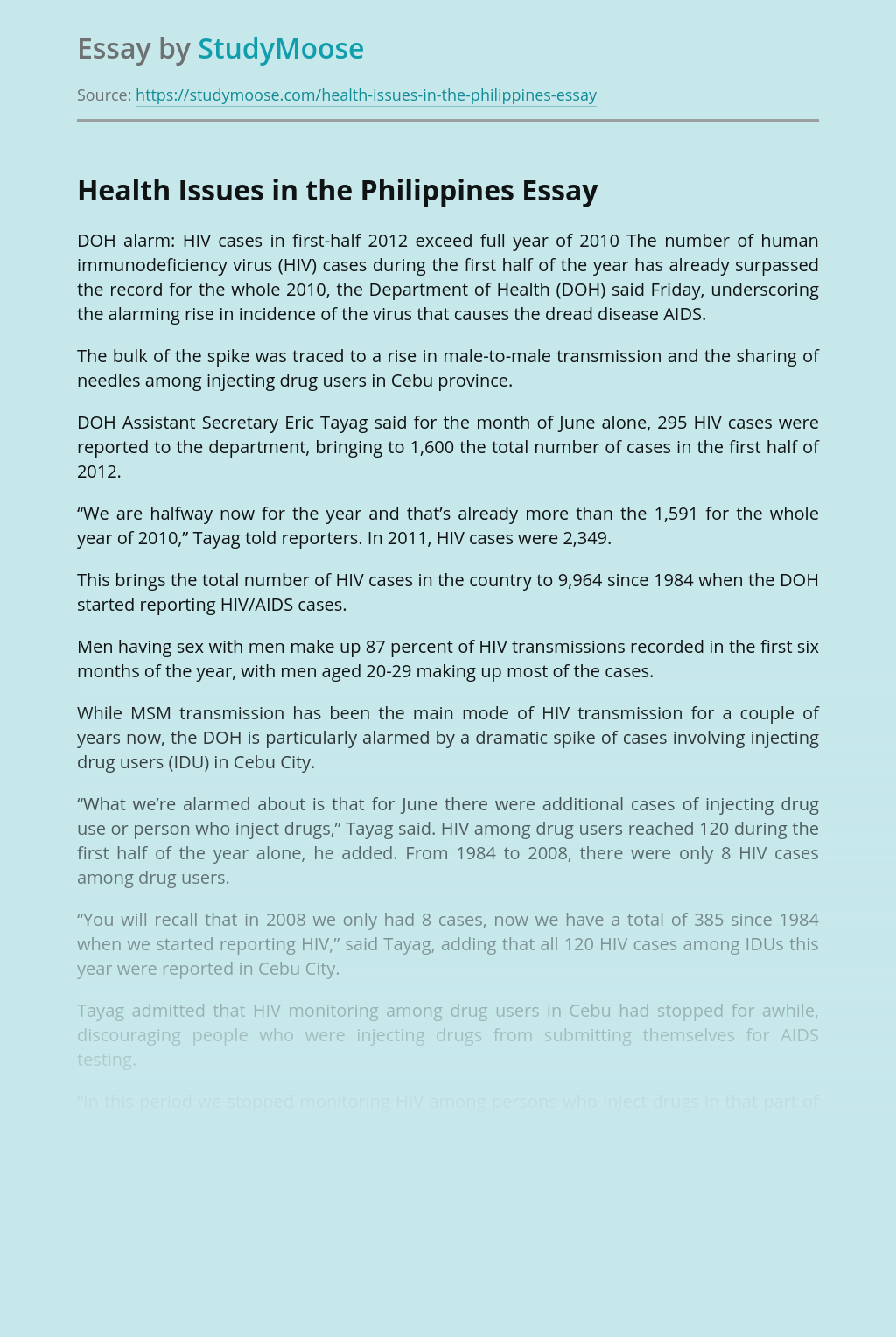 James Houston put together the documentary “Let’s Talk About Sex” that highlights the differences between American’s approach to sex education and that of other countries like the Netherlands. The stereotypes, controversy, and irony all related to sex is put out in the open and discussed. Throughout the film, it is obvious that America’s ways of...

How HIPPA Violations Affect the Medical Billing Process Human Immunodeficiency Virus (HIV) is the virus that causes Acquired Immunodeficiency Syndrome referred to as AIDS (Public Health Agency of Canada, 2010). Left untreated, HIV can damage the immune system that can lead to AIDS. When the initial diagnosis becomes established the patient has many adjustments to...

Specific Purpose: At the end of my speech, the audience will be informed on the risks of HIV/AIDS and the steps you can take to prevent this from happening. Central Idea: With this infection growing in the world, we must make sure that we are educated and that we avoid the behavior that will cause...

2.0INTRODUCTION HIV/AIDs has been ranked among the common disease of all times that is threatening us with the extinction of youths and adults. It is not only terrorizing the entire generation but also kills and leaves millions of orphans for the oldest grandparent to carter for. 2.1HIV/AIDS IN NIGERIA According to USAID brief (2004), Nigerian...