Hawaii climate is tropical with remarkable differences in climate within short distances. Hawaii’s climate is warm throughout the year with temperatures ranging from 20 to 28°C (68 to 85°F). The rainy season is between December to March; rain can be heavy in the mountains but elsewhere it is confined to short showers. The climate of Hawaii is a typical for a tropical area and regarded as more subtropical than the latitude would suggest because of the moderating effect of the surrounding ocean.

Don't use plagiarized sources. Get your custom essay on
“ Hawaii Climate vs Mexico Climate ”
Get custom paper
NEW! smart matching with writer

Temperatures and humidity tend to be less extreme. However, the most influencing factor of Hawaii’s weather is orographic – caused by the mountains.

The higher the mountain the greater the extremes. The mild, uniform climate of Hawaii is famous all over the world. Wide temperature changes are unknown in the state. Despite Hawaii’s location in a tropical zone, cooling ocean currents keep the climate moderate. Unlike Hawaii, Mexico is a land of contrasts, from tropical coastal plains to deserts and mountains.

Climate is largely determined by altitude; beach resorts are generally hot and humid whilst the colonial cities on Mexico’s central plateau have almost constant spring temperatures. Mexico has pronounced wet and dry seasons.

Most of the country experiences a rainy season from June to mid-October and significantly less rain during the remainder of the year. Mexico lies squarely within the hurricane belt, and all regions of both coasts are susceptible to these storms from June through November. Hurricanes are relatively rare events in the Hawaiian Islands. Records show that strong windstorms have struck all major islands in the Hawaiian Island chain since the beginning of history.

The first officially recognized hurricane in Hawaiian waters was Hurricane Hiki in August of 1950.

Hawaii’s mountains significantly influence every aspect of its weather and climate. Orographic interception of moisture carried by the northeast trade wind is the primary control on Hawaiian rainfall patterns. Hawaii is the most noted example of hotspot volcanism. ?Kilauea is one of the most active volcanoes in the world. Kohala Mountain is the oldest in Hawaii, which is also a volcanoe. Areas near the summit of Kohala that receive greater than about 1200 mm rainfall today were drier and cooler during most of the last glacial period. Like Hawaii, even Mexico gets affected with hurricanes.

Hurricane Hugo passed directly over Cancun in September 1989, with winds in excess of 200 kilometers per hour producing major damage to hotels in the resort area. In September 1988, Hurricane Gilbert struck northeast Mexico. Mexico lies squarely within the hurricane belt, and all regions of both coasts are susceptible to these storms. Most of Mexico is an immense, elevated plateau, flanked by mountain ranges that fall sharply off to narrow coastal plains in the west and east. The State of Hawaii, which has both major and minor islands were formed by volcanic eruptions.

Since, Hawaii is in the tropics, where the length of day and temperature are relatively uniform throughout the year. Hawaii’s longest and shortest days are about 13 1/2 hours and 11 hours respectively. Uniform day lengths result in small seasonal variations. The topography of Mexico is very diverse, and the climate reflects this fact. At any time of the year you can find an area of Mexico with a perfect climate. Many parts of the central highlands and some coastal locations, have “perfect” weather all year round.

In the tropics, the temperature drops with altitude, and that is why most people in Mexico live on the central plateau of the country. Cities like Guadalajara and Lake Chapala are located at approximately 5000 feet above sea level. Mexico is located around 7000 ft. The Tropic of Cancer cuts across Mexico near Mazatlan and Ciudad Victoria and south of the tropic it’s hot and humid all year long along the coastal plains on either side of the country. The hot, wet season runs from May to October with the hottest and wettest months falling between June and September for most of the country.

Low-lying coastal areas are wetter and hotter than elevated inland ones. Though the hottest summer extremes are generally found on the coastal plains, temperatures in the Altiplano and the Plataforma Yucateca often reach higher than 100 degrees F (38 degrees C). Hawaii’s heaviest rains are come from winter storms between October and April. While the effects of terrain on storm rainfall are not as great as on trade wind showers, large differences over small distances do occur, because of topography and location of the rain clouds. Differences vary with each storm.

The mild temperature of the islands is matched by dependable patterns of sunshine and rainfall. Puako, on the Big Island, has about 10 inches (25 centimeters) of rainfall during an average year. It is the driest area in the Hawaiian chain. On the Yucatan peninsula, along the mainland Pacific coast, along the Gulf coast north of Veracruz and in the Depresion de Balsas, annual rainfall reaches 30 inches (80 centimeters) or more. Mexico ’s highest rainfall totals are in northeastern Chiapas and along the Gulf coastal plains of Tabasco with over 98 inches (250 centimeters) per year.

In conclusion, though Hawaii and Mexico share a tropical climate both are prone to hurricanes. Therefore, their rainfall is usually seasonal and, their summers are dry. In the wetter regions, where rainfall comes from both winter storms and trade wind showers, seasonal differences are much smaller. A dry winter, followed by a normally dry summer and another dry winter, can have serious effects. The absence of trade winds affects mostly the windward and upland regions, which receive a smaller proportion of their rain from winter storms. 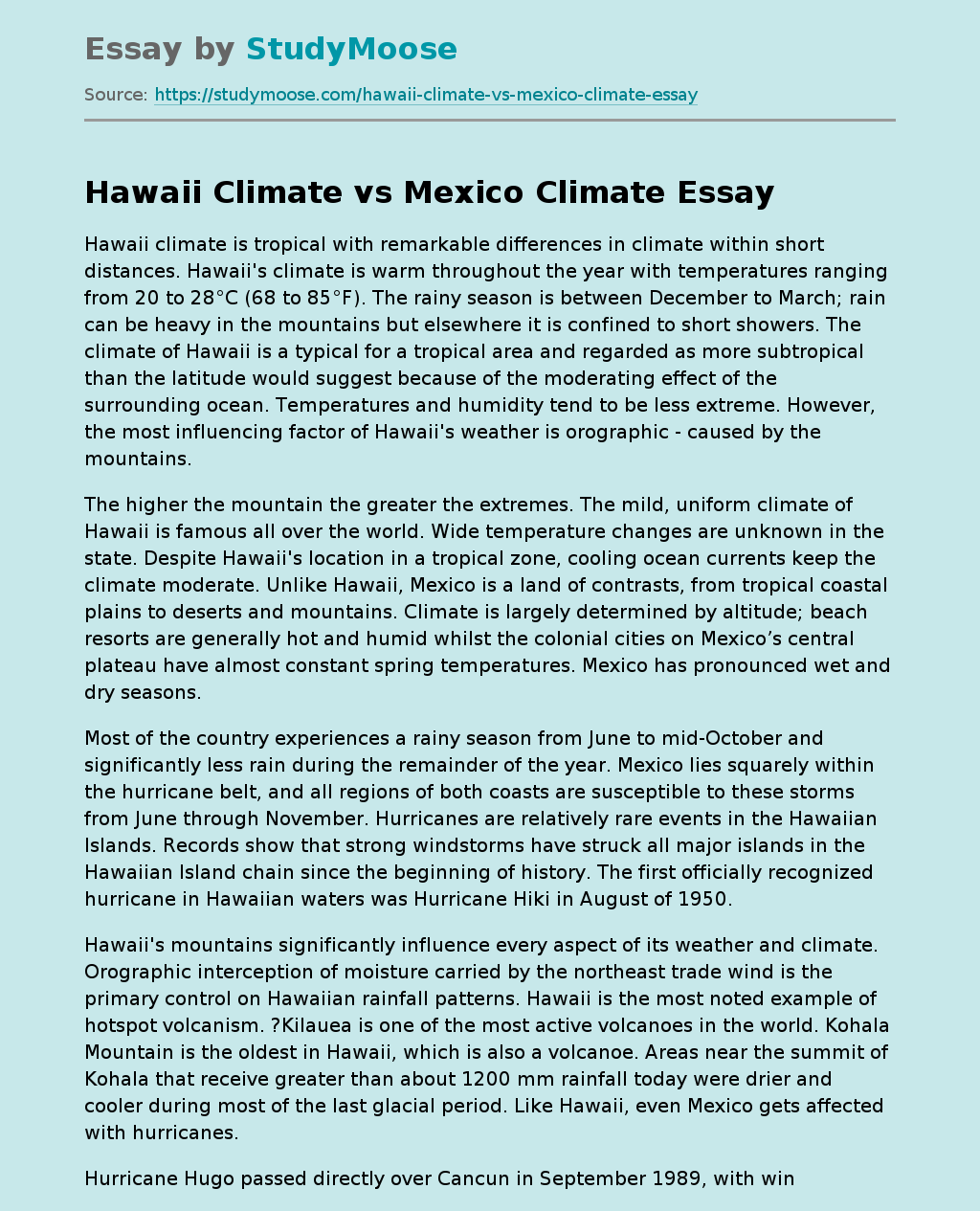