To achieve the level of success and prestige that Hatshepsut aspired, she like all pharaohs needed skilled nobles and a huge bureaucracy to advise them in all aspects of administration. Perhaps the most famous of all her advisors is Senenmut. It is not known how he rose to prominence at court and how he won the trust and favour of Hatshepsut but he appears among her officials before the death of Thutmose 11. Senenmut may have started his career as an administrator in the Temple of Amun at Karnak.

Don't use plagiarized sources. Get your custom essay on
“ Hatshepsut’s relations with Egyptian nobles ”
Get custom paper
NEW! smart matching with writer

He also served as an official under Thutmose 11. It was at this time that he was appointed as steward and tutor or great nurse to her daughter, Neferure. One surviving statute shows him “nursing” Hatshepsut’s small daughter.

Some historians have suggested that Senenmut may have been more than a close advisor to Hatshepsut and perhaps her lover. Some historians also suggest that he may have been the father of Neferure. This view has been based on the great honours which Hatshepsut appears to have given him, such as the use of over eighty titles, the permission to have his name and image inscribed in her mortuary temple, permission to build two tombs at Sheikh Abd el-Qurna and under the forecourt of her mortuary temple.

Also the corridors of his tomb were burrowed down towards the queen’s temple, so that in death they could still be near.

However there is no firm evidence that the relationship between Hatshepsut and Senenmut was sexual, which leads other historians to propose that Senenmut acquired such power and influence because he was the elder statesman of Hatshepsut’s court.

Even though Senenmut may have helped her carry out her plans, Hatshepsut’s strongest support came from the priesthood of Amun, and chief of the Prophets of the South and the North. Hatshepsut held the prestigious position of God’s wife of Amun and this may have given her some influence with the priesthood (Robins)

Hatshepsut reigned for over 21 years and initiated building programs as far as Cusae and Semna, in order to achieve this there must have been other officials. The evidence to their identities come from ‘name stones’ discovered in the foundations of some of the buildings as well as statues, graffiti at excavation sites, reliefs and inscriptions on the temple walls, and autobiographical texts in the tombs of officials.

Ineni was an official that served both Thutmose 1 and Hatshepsut. Ineni was a noble who held official positions, his main title was ‘overseer of the granary of Amon’ and scribe. Ineni’s tomb inscription gives a contemporaneous comment on Hatshepsut’s control of the state, “Hatshepsut settled the affairs of the two lands… who satisfies the two Regions when she speaks”. This evidentially shows that Hatshepsut had a strong personality and showed herself as an efficient administrator. However, she would not have been able to govern the land without the support of a number of loyal officials from the civil, religious and military bureaucracy (Tyldesley).

Another key advisor was the noble Thuity who was the successor of Ineni as ‘overseer of the double gold and silver houses’. He was probably the builder of her ebony shrine furnished the metal work on the two great obelisks, and measured the precious metals brought from Punt. Later, his name was erased from within his tomb with that of Hatshepsut.

Therefore, it could clearly be seen that in order to achieve the level of victory and prestige that Hatshepsut desired, she like all pharaohs needed skilful nobles and a vast bureaucracy to direct them in all aspects of administration. 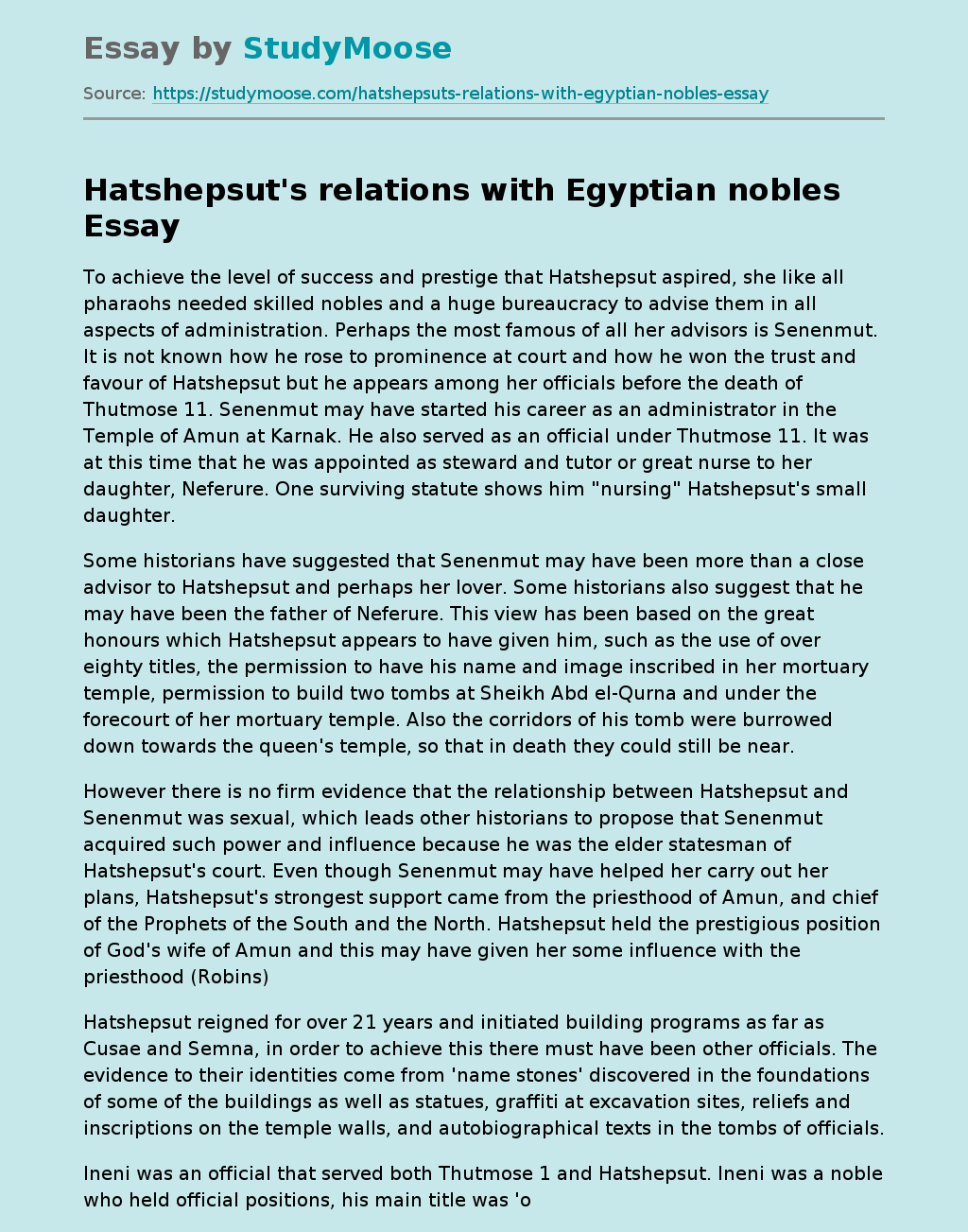