Has television destroyed communication among friends and family?

Television is undoubtedly one of the most powerful means of communication in the history of humankind, rivaled only by such other forms of communication as the Internet, the telephone, movies, and, of course, simple, low-tech speech. Television, with its wide availability and rich media with image and sound, is difficult to ignore and even seductive in its appeal. Television is as much a part of our lives as are our meals, work, or school; studies consistently show that the average American child spends almost as much time watching television as she does in school.

Don't use plagiarized sources.
Get Your Custom Essay on Has television destroyed communication among friends and family? Just from $13,9/Page

Furthermore, because television is so rich in its media, it often requires our full attention or is more attraction to us than are our daily lives. Naturally, the more time one spends watching television, the less time she has with her family and friends.

Most people much prefer spending time with their families and friends to spending time watching television. Television is of course an important part of many people’s lives, but most people would gladly choose family and friends over television were they given the choice. Furthermore, most educated people are aware of the deleterious effects of too much television and either avoid excessive time watching television, or actually do not enjoy it. I, for example, after a long day at work, would much rather spend time talking with my wife and playing with my children than I would watching some unrealistic portrayal of life on television. For me and my family, our time together is precious and beautiful, and could never be replaced or hurt by television. Furthermore, the effect of television is simply not so great that it could be said to have “destroyed” communication among family and friends. Granting that communication among family and friends in industrialized countries has decreased in recent years, it might be tempting to blame this problem on television since its rise roughly coincided with the decrease in time we spend with our families. However, I believe this situation is more likely due to increased pressures relating from work, school, and the economy. In my case, for example, I find that my pressures from work are so great that I must often sacrifice time at home so that I can meet the challenges of running my own business.

Many of my friends are in similar situations–my best friend, for example, has just finished law school, which took about sixty hours a week of his time. In a word, people nowadays have very little time for anything, but television is not the cause–it is increased desire to succeed. In some situations, however, television has surely contributed to a decrease in communication among family members. In my childhood in the countryside, I often saw parents and children watching television for hours on end, rarely speaking with one another. It seemed for them that television was a way to escape from their sad, miserable existence. However, even in this case, I would say that television merely contributed to the bad situation, but did not cause it; were television not existent, surely these people would have found other escapes, alcohol or gambling, for example. In other words, people always find a way to do what they want to do. In short, I do not believe that television has destroyed or even harmed interpersonal communication among most people. Most people realize that television is merely a temporary diversion and do not use it to replace interpersonal communication. I believe that the damage attributed to television is greatly exaggerated and that such damage is most likely attributable to other more powerful social factors.

Has television destroyed communication among friends and family?. (2016, Feb 20). Retrieved from https://studymoose.com/has-television-destroyed-communication-among-friends-and-family-essay 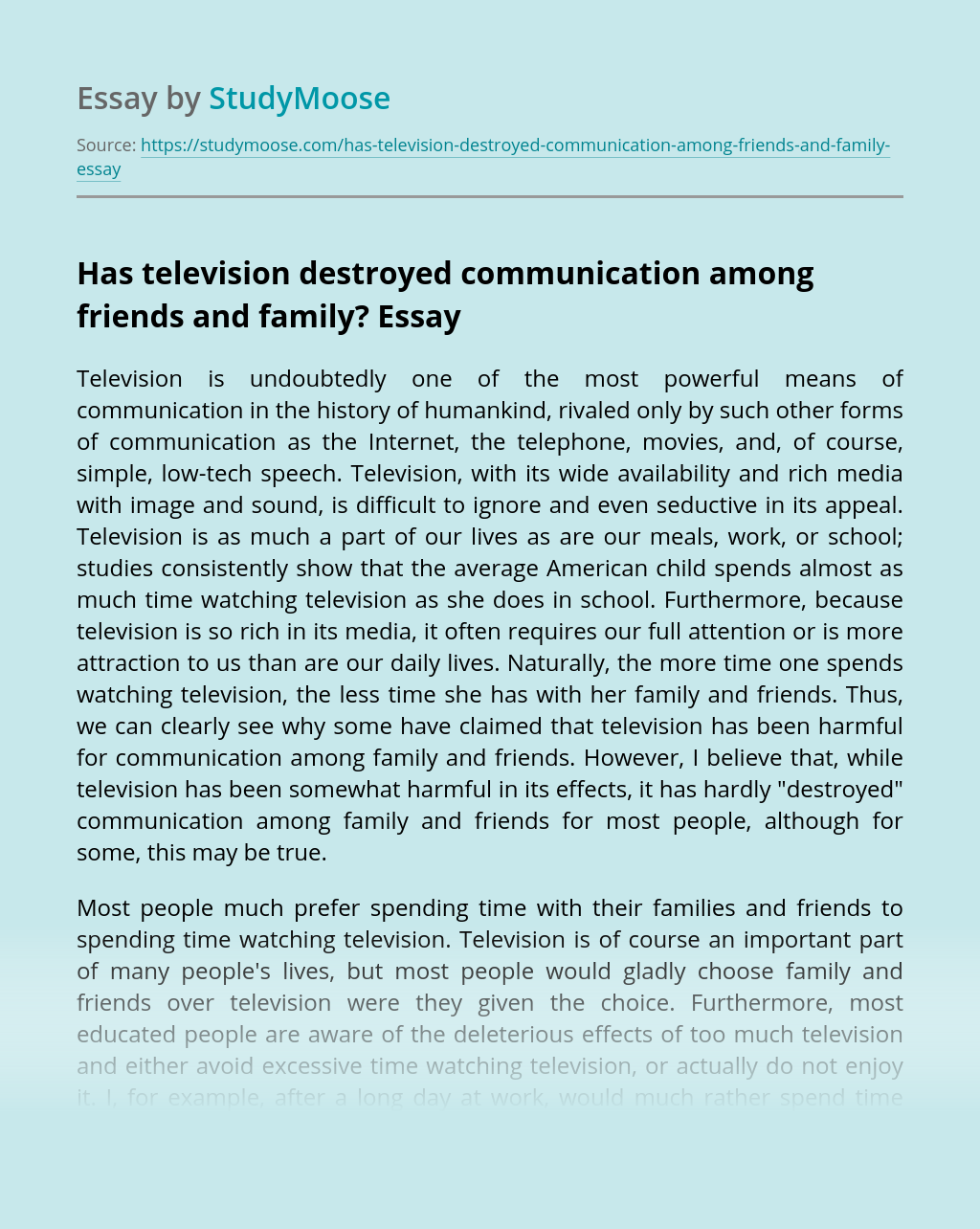 Kinship is better than friendship

Rate this post Nowadays, friendship usually appears to be good, but a kinship is always the best bond. A friendship can be a great connection in life, but it takes time to adapt to it and cultivate a good relationship. Kinship is more valuable than friendship because relatives give an unconditional support and accept their...

Rate this post A very good morning to my beloved teacher, Pn. Fatirah Aziz and all my fellow friends. As you know, my name is Nurin Fatihah and I’m pleased to talk with you about a topic that is near and dear to you, “Friends and Friendship”. In life, everyone will meet many people that...

Get Essay
Friendship and Romance

Rate this post 1) It is very important to set goals of one’s friendship because just like any other activity maintaining friendship must also have certain objectives. Though interacting with a friend is not a task. It is our duty to maintain healthy relationship with all our friends irrespective of differences in our social status,...

Rate this post Friendship is one of the most important relationships of people in their daily lives. It’s certainly a blessing if you have a lot of friends in your life. People make friends because they want to interact with someone who has the same interests and share their experiences and feelings. Some people think...

Rate this post Raising a child is every parent’s challenge once their kids are born. In today’s setting where influence plays a major aspect of affecting a child’s behavior, it is not enough that parents only provide their material and financial needs. It is also important that at the soonest time possible, parents should have...

How Society and Culture Affect Friendship

Rate this post How society and Culture affect Buddies and Social Activities The ‘social’ is an important concept to know to comprehend this subject. It is the totality of explanations explaining how people engage and make significances of their experiences. Culture, as should be known, is Shared, transmitted, discovered, adaptive etc. Different cultures promote different...

Rate this post My best friends are the most tremendous friends I could ever ask for. I can talk to them about anything, or not say anything at all. We support each other in what the other does. We can be apart for so long but when we see each other again, it’s like they...

Rate this post From the time of Aristotle (384-322 BC), the notion of friendship and even the term friend have fascinated philosophers. Aristotle, a famed philosopher himself, opine that Without friends, no one would choose to live, though he had all other goods. (Aristotle, and Ross. 2016: 307) In elaboration, every man seems to be...