Harry Potter and the Goblet of Fire

Hi and a very good evening to Miss Jessica and to my fellow course mates. I’m Natasha and today I would like to share with you guys and to talk a little bit about my favorite movie, and the title of that movie is Harry Potter and the Goblet of Fire.

Don't use plagiarized sources. Get your custom essay on
“ Harry Potter and the Goblet of Fire ”
Get custom paper
NEW! smart matching with writer

What I like about this movie is the creative imagination of the plot, how they use some English words that I’ve never heard or used before, and also everything is so magical and unique, such as library books that floats and arranged themselves back to its spot.

At Hogwarts school, they have moving staircase, the people drawn in the portraits can move and speak, spirits of past teachers who never seem to leave the school, an invisible cloak, the funny but unique names of all the professors in the school, and of course the astonishing interior and exterior design of Hogwarts. Those who possesses a wand can control things, animals and insects while saying a curse. There is also a Ministry’s summer internship.

The story follows Harry’s fourth year at Hogwarts as he is chosen by the Goblet of Fire to compete in the Triwizard Tournament.

Somewhere in the beginning of the movie, Harry Potter, his friends and their families went to the top of a hill where there’s only one side of a boot placed there in which it is actually a portkey, a portable gateway to enter another location. All they have to do is touch it and off they go to another location intended for them to be. They arrived at Quidditch world cup, a wizardry event where magics are being used during tournaments and games. Over here, people are flying around with their broomsticks instead of walking.

They went inside a small camp where inside is as big as a normal house. This is only possible if you use magic. When they arrive at the quidditch world cup, the participants on a broomstick shoots something up to the air with their wand where the little fireworks burst to an image of moving mascot of their team, this is very different from our normal mascot where a person is required to wear an animal onesie’s or attire. They read newspaper about the event and the image in it are moving and even makes sounds. That’s where Harry meets the girl that he likes, an asian girl.

Despite all the magic that they have or can use, they still use feather and ink(quill) to write??, and use owls to deliver letters. They have Pegasus and a wheel cart to transport them on air instead of using a broomstick to fly.

Hogwarts has been chosen to host a legendary event, the Triwizard Tournament that brings together three schools for a series of magical contest. The 3 schools are, Hogwarts, an all girls academy, and an all male academy. Lovely ladies of the beauxbatons academy of magic and their headmistress is a tall but gigantic size women. Only one student from each competing schools are allowed to participate and they must survive three tasks to achieve eternal glory, three extremely dangerous tasks. For the tournament, no student under the age of 17 shall participate as a safety regulations. Inside a statue that resembles several crowns stacking on each other, lies inside the Goblet of Fire, an exceptionally powerful magical object, with its size as big as a big trophy-like cup, with magical blue flames coming out of it. The goblet of fire is an exceptionally powerful magical object that constitutes a binding magical contract, whereby if you are chosen, you have to obey the rules.

For the headmaster of Hogwarts, he has an ability to extract memories from his mind and keep it in the Pensieve, and all he has to do is use a wand and put at his temple, and out comes a neon light string from his temple. When he place his wand beside his mouth, the wand acts as a loudspeaker.

Each of the three tasks involves very considerable danger. The 1st task are connected to dragons Before they start, a reporter was there to write about the event, using flying quill and a floating notebook that writes by itself. Each choose 4 small dragons inside a bag, each of which has been given a golden egg to protect. The objective is simple, to collect the egg, and each must succeed for each egg contains a clue to proceed to the next task. They take turns doing the 1st task until it is completed. When opened, the egg lets out a very high pitch noise. On that night, a Yule ball event is hosted, where it has been a tradition of the triwizard tournament since its inception.

A spirit of a girl tells Harry to open the golden egg inside the water. The 2nd task is to recover ·from Blake Lake, a place where merpeople lives. Harry needs something that will allow him to breathe underwater for an hour, so he use gillyweed which is a type of herb. Each champion need only find their treasure and return to the surface. Harry then eats the gillyweed and when he’s under the water he starts to grow gills and sorts. While 4 of them are under the water, the female participant failed her task. The merpeople are guarding the place, and Ron and Hermoine are the ones who are being tied down at the bottom of the lake. Each can only save one, and Cedric use wand to save Cho, but Harry wanted to save both. Viktor uses magic that transform his head to a shark’s head and he saved Hermoine, so left Ron and Fleur sis. Octopus wit strange heads attack harry so he let Ron and the girl float up thereby saving both of them, while slowly lose power underwater, so uses his wand n says jumps out of the water.

Harry behaved admirably, so he won for outstanding moral fiber. Department of mysteries. Moody keeps drinking something from a little bottle that actually contains polyjuice potion that he has to drink in order to keep pretending to be the real Profesor Moody. . Suddenly a secret glass door open behind him, n a water fountain with glowy dreamy bluelike color with floating images with is actually a memory from dumbledore kept it there it there, called a PENSIEVE, it allows a person to see once more things they’ve already seen. moody put the Triwizard cup deep within the Maze, d 1st person to touch the cup is the winner.

DUMBLEDORE say that while we may come from different places and speak in different tongues our hearts beat as one. They left for school break and promise to write each other letters.,

Harry Potter and the Goblet of Fire. (2019, Dec 09). Retrieved from https://studymoose.com/harry-potter-and-the-goblet-of-fire-example-essay 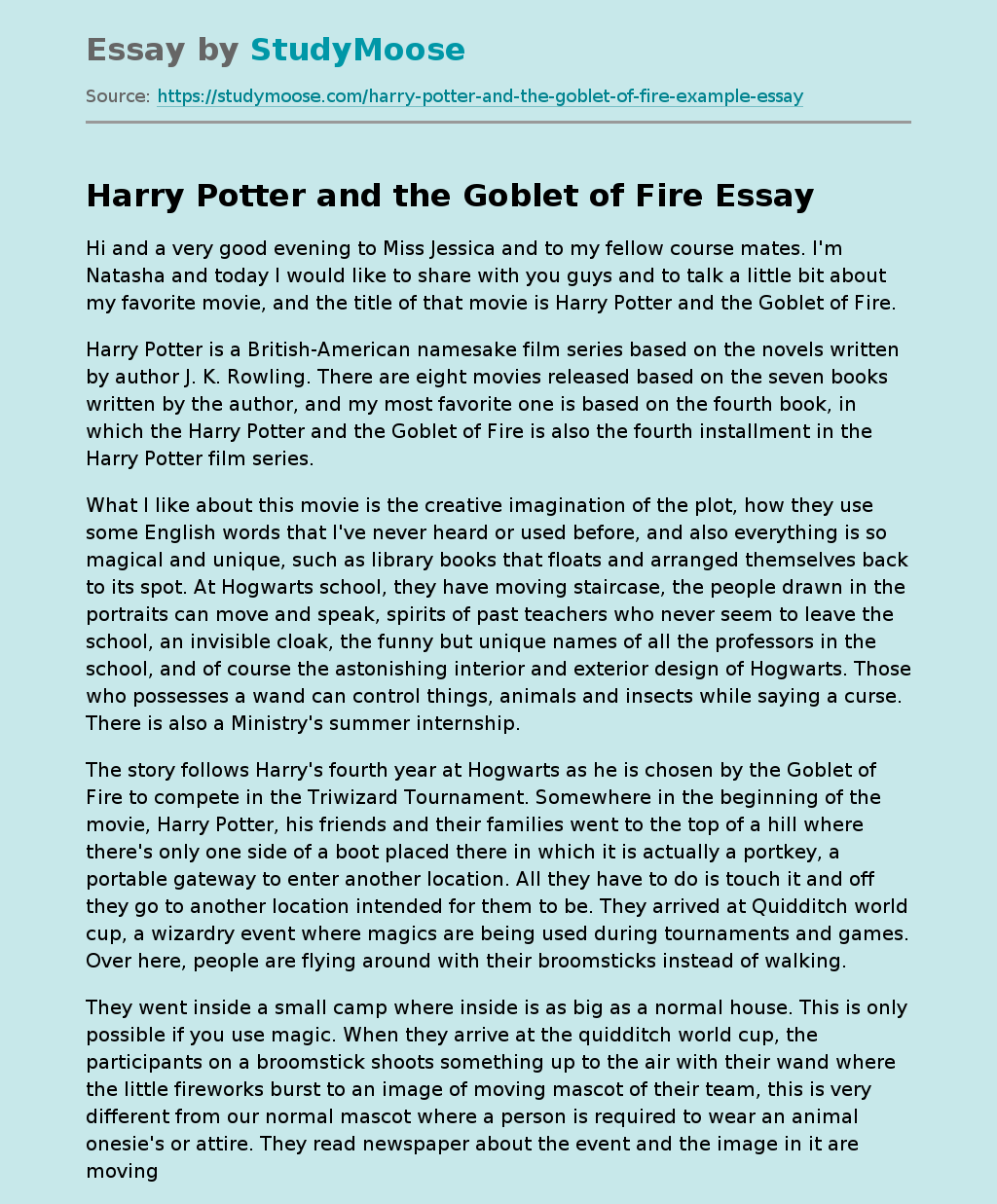