Throughout Neutral Tones, Hardy effectively communicates his feelings about love using the natural world and its (neutral) colours and characteristics. His use of rich imagery of the natural world produces a melancholic note about love, which resounds through the whole poem portraying the end of an affair between Hardy and his former lover.

The backdrop of the poem is set in the first stanza as a ‘winter day’. Hardy uses the time of year to convey a sense of melancholia as winter often has a negative connotation and is associated with colder feelings and emotions.

In this way, ‘winter’ could be representing the frosty nature of the relationship and how Hardy’s former lover was cold towards him. The descriptions in the first stanza are all colourless (neutral tones) which suggests that Hardy feels as if he has no colour in his life, no love. His negative feelings about love are conveyed especially effectively here because they are expressed right at the beginning of the poem – this sets an unhappy tone for the first stanza, which deepens further into the poem.

In the second line of the first stanza, Hardy describes the sun as ‘white’ and ‘chidden of God’. His use of the colour ‘white’ suggests that his feelings about love are blank (or neutral), lifeless, and even depressing. It contrasts with the typical colour of the sun – yellow – a symbol for vibrancy and happiness, both emotions that Hardy does not feel about or achieve from loving the woman. In addition, the sun and pond are circular and non-angular in shape; this portrays that Hardy feels as if there is no escape from the negativity that he finds to be attached to his love and that it is never ending, in a loop. Hardy also may have meant for the sun to symbolise his relationship – God could have made it shine with yellow positivity, but instead He has made it a drab white tone; perhaps Hardy feels as if his relationship and love have been condemned by God.

Hardy’s miserable feelings are further emphasised by the alliteration of the letter ‘L’ in ‘a few leaves lay’ – when read aloud, the sound of the letter creates a kind of idle yet unsettled tone which relates to Hardy’s feelings towards love. He feels idle yet unsettled in the sense that whilst he cannot do anything to stop his affair from falling apart, he does not wish for it to do so. The ‘L’ sound contrasts with the ‘S’ sound later in the line, which is a harsher, more acute sound, perhaps representing the attitude of the lover towards Hardy at the end of their affair.

The image created by the ‘few leaves’ symbolises Hardy’s feeling that the love between him and his lover is disintegrating; the leaves are related to natural life dying, but in this instance Hardy uses a metaphor to relate the leaves instead to love dying. The ‘starving sod’ suggests that Hardy feels that his relationship is ‘starving’, as if it were not being ‘fed’ enough love to keep it strong and happy and it has therefore been reduced to ‘sod’ – treaded on and not special.

The leaves that ‘had fallen from an ash, and were gray’ symbolise the way that Hardy and his lover have also ‘fallen’ out of love. ‘Ash’ could mean ashes as well as the type of tree, carrying on the theme of death that was introduced earlier in the stanza. Also, the colour of ashes as well as the leaves is ‘gray’, a neutral colour, suggesting that Hardy has quite reserved feelings about love. In addition, the description of the fallen leaves from the ash is quite gentle – that is, that the language is relatively reserved. This conveys the lack of passion that Hardy and the woman share within their relationship.

At the end of the third stanza, Hardy’s lover’s bitter grin is described as sweeping ‘thereby/Like an ominous bird a-wing…’ This suggests that Hardy feels a sense of impending doom about love and his relationship with the woman as if he knows that something harmful is bound to happen in the future and that the relationship is going down a dangerously steep downhill slope, destined for a crushing ending. The ‘bird a-wing’ kind of represents how his love and passion for the woman is flying away, like a bird. Another interpretation is that Hardy feels that the ‘ominous bird’ mocks him, circling over him like a bird of prey – he is stuck in a cycle of love and pain in his relationship whilst the he imagines the bird soaring free.

In the last stanza, Hardy refers to the sun as “God-curst”. This depicts a change in Hardy’s feelings about love from the beginning of the poem – his language starts to show anger, rather than sadness. The reader or listener may interpret this as a religious reference from Hardy – perhaps he feels that his failing love is inevitable because it has been predefined by God (this introduces the idea of fate coming into the equation).

The poem starts and ends with the same location and memory – the pond. This suggests that Hardy feels like he cannot escape from the constant cycle of love and pained grief that he has been experiencing, and that his memory of the pond scene and his feelings about love keep on repeating in his head; perhaps Hardy feels somewhat trapped within his own mind with no escape.

Hardy’s description of the natural world at the end of the poem, ‘Your face, and the God curst sun, and a tree,/And a pond edged with grayish leaves.’ is very blunt and mostly monosyballic symbolising blankness, as if Hardy’s feelings are numb. This contrasts greatly with the much more emotive and descriptive language he used at the beginning to depict the same objects. This change suggests that Hardy has changed his view about love to a more cynical one, feeling as if love ‘deceives’ and tricks him. Hardy uses this paradox to combine the feeling of melancholia and the notion of a passionless relationship, emphasising the point that what passion there once was between Hardy and his lover is there no longer. 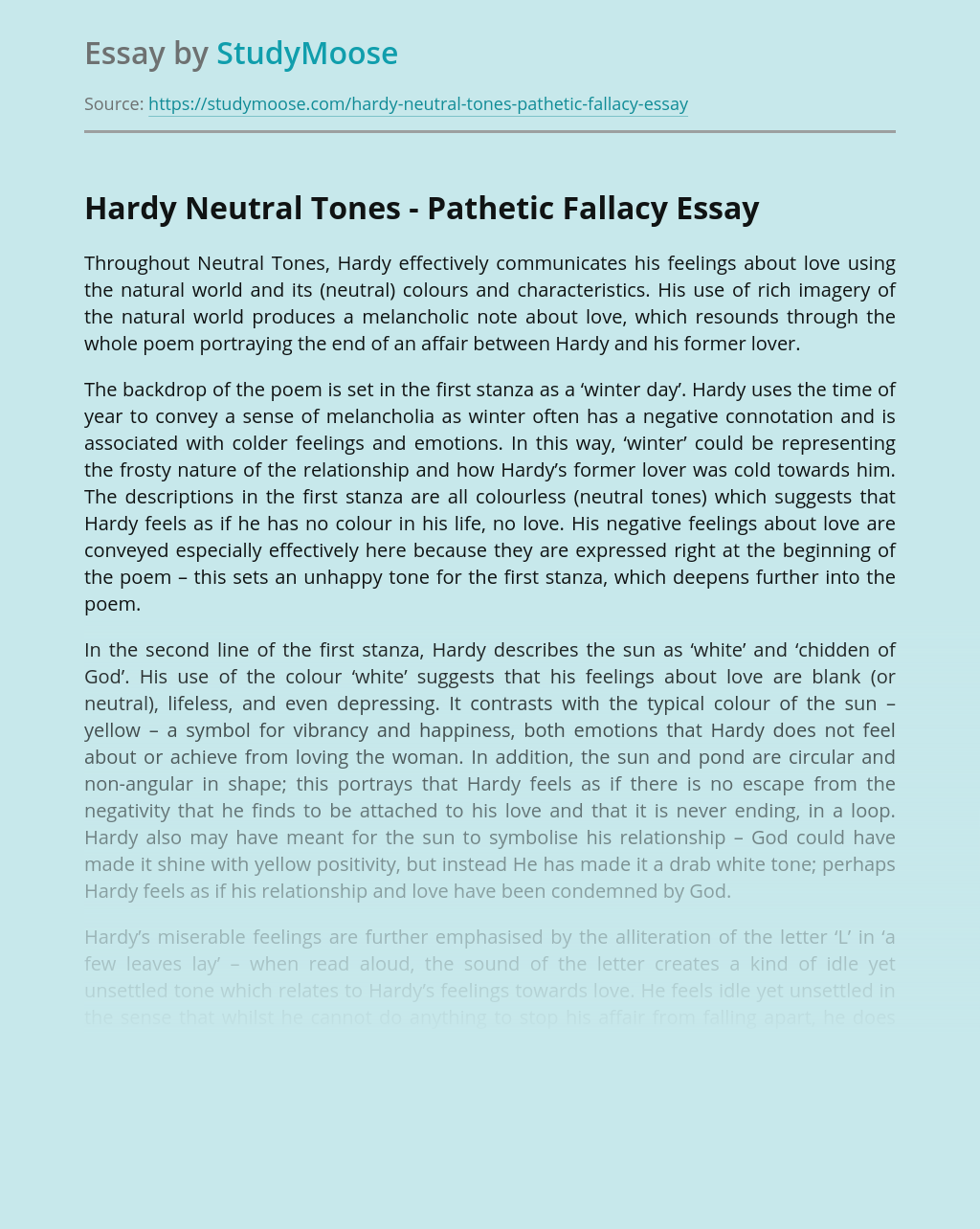 Kenneth Slessor wrote the poem Beach Burial whilst he completed his occupation as the official Australian Correspondent in the Middle East. Due to Slessor’s observations of the war at close quarters he soon learnt about the horrific horrors of war. During Slessor’s stay in El Alamein which is a small village found on the Egypt...

View sample
No Faith, No Love, No Time, and Dr. Lazaro

The short story “Faith, Love, Time, and Dr. Lazaro” of Brillantes is caught in a juxtaposition and irony by the abstract elements of the title. This paper hopes to make these abstract elements concrete to further understand the story better. Furthermore, this paper will present a comparison and contrast of mainly two characters, Dr. Lazaro...

View sample
Get Essay
How does haddon create sympathy for ed boone?

How does Haddon create compassion for Ed Boone? In the unique, The Curious Event of the Pet Dog in the Night Time, I shall be checking out how Haddon creates sympathy for protagonist, Ed Boone. I have numerous aspects to safeguard my viewpoint. To start with, our very first impressions for the character of Ed...

A 1954 ad for Lux Toilet Soap states, “Luscious is the word for Greer Garson’s complexion and she keeps it that way with Lux Toilet Soap. ” This statement is an example of how emotional appeal is used in the ad to grab the reader’s attention. The advertiser uses character appeal by including information about...