Offred, in Margaret Atwood’s disturbing novel The Handmaid’s Tale says, “But who can remember pain once it’s over? All that remains of it is a shadow, not in the mind even, in the flesh. Pain marks you, but too deep to see. Out of sight, out of mind.” The society of Gilead causes the aforementioned pain and demoralization by using women’s bodies as political instruments. Similar to Atwood’s novel, today’s men put immense pressure on women to be a certain way, give them children, and take care of the home and the like.

Turn in your highest-quality paper
Get a qualified writer to help you with
“ Handmaid’s Tale Novel Reading ”
Get high-quality paper
NEW! AI matching with writer

In Atwood’s novel, The Handmaid’s Tale, she examines the theme of demoralization of women through graphic predictions of what women’s futures may look like.

In 1 Corinthians 6: 19-20, the Bible states, “Or do you not know that your body is a temple of the Holy Spirit within you, whom you have from God? You are not your own, for you were bought with a price.

So glorify God in your body.” In The Handmaid’s Tale, the society influences the citizens, like Ofglen, differently. The society wrongfully manipulates women to use their bodies for what the government decides is right, not what God planned for their bodies. Through this wrongful use, women have once again become less superior to men and treated more like an object than a person. Also in Corinthians 6:18, the Bible states, “Flee from sexual immorality. Every other sin a person commits is outside the body, but the sexually immoral person sins against his own body.

” The government in The Handmaid’s tale encouraged sexual immorality by passing the handmaids from man to man, ruining the women’s purity and demoralizing their bodies by using them purely for reproduction methods.

In the time period of The Handmaid’s Tale, the demoralization of women was normal and accepted, but even the supporters of the demoralization remembered the time when women weren’t being passed from man to man to reproduce and were respected and upheld in society. In today’s society most of the biblical morals are upheld and for the most part, women are equal with men. Women aren’t forced to move from man to man for reproduction purposes and they have the choice of whom they will marry and reproduce with. The true purpose of a woman is to be the man’s equal and to provide in her what the man doesn’t have. The Handmaid’s Tale portrays women in a demoralizing way, giving them no choices, freedom, or say.

The government in The Handmaid’s Tale enforced the demoralization of women in Gilead. The original government was overthrown by a group of totalitarian men who enforced the laws that began the demoralization of the women. The government then takes complete control of everyone, making Gilead more like a communist country than democratic America. The Constitution is completely thrown out, taking away citizens, especially women’s, freedom and rights. Most of the men are completely obedient and support the government’s treatment of women. Even when the commander broke the rules and took Offred out, he made sure that she still understood he has complete and total control over her. Demoralization was in full effect, and there was no escaping it.

In today’s society women have similar roles to those of men. They work, provide for their families, and are seen as equal to men. In The Handmaid’s Tale, women are used as a tool to create children for the “commanders” and are treated more like an object than a human being. In The Handmaid’s Tale, the society is reverted back to when women had no rights and were seen more like a trophy that would respond to men’s every beck and call. The handmaids’ roles in the novel are even worse than that of the olden day “housewife.” When the handmaids disobey, they are put to death or left in the wasteland of what used to be America. No one receives a harsher punishment than that. Even in today’s society women don’t receive that harsh of a punishment if they disobey. This just goes to show that in the society and time of The Handmaid’s Tale, the demoralization of women as political instruments was in full swing.

Despite all of Gilead’s pro-women rhetoric, such subjugation creates a society in which women are treated as subhuman. They are reduced to their fertility, treated as nothing more than a set of ovaries and a womb. In one of the novel’s key scenes, Offred lies in the bath and reflects that, before Gilead, she considered her body an instrument of her desires; now, she is just a mound of flesh surrounding a womb that must be filled in order to make her useful. Gilead seeks to deprive women of their individuality in order to make them docile carriers of the next generation.

Throughout the entire text of The Handmaid’s Tale, the ruling totalitarian government does what is in its power to attempt to isolate women from society. Not only do are the women isolated from society in terms of sexual contact (or any contact, for that matter), with men, but they are also individualized within the gender itself and separated from each other. Evidence of this isolation is available throughout the novel in different levels. The first level, perhaps the harshest, is the division of genders, with women like the Handmaids unable to communicate with unmarried men. Offred’s separation from men is apparent when she compares herself to the “power of a dog bone”, but the bone is “held out of reach”.

This depicts how there is a strict gender division that disallows them to even communicate with each other, much less have sex. For the Angels, they are not even allowed to look at the so-called dog bone. When we are first introduced to the idea of the Angels, Offred mentions that the Angels must stand outside of the gymnasium “with their backs to us”. Offred wishes that they would only look at her and if only “something could be exchanged”. The guards of the complex Offred is held in at the beginning of the novel aren’t even allowed inside it. With the men not allowed in the Red Center and the women now allowed outside of it, they are each isolated from each other. 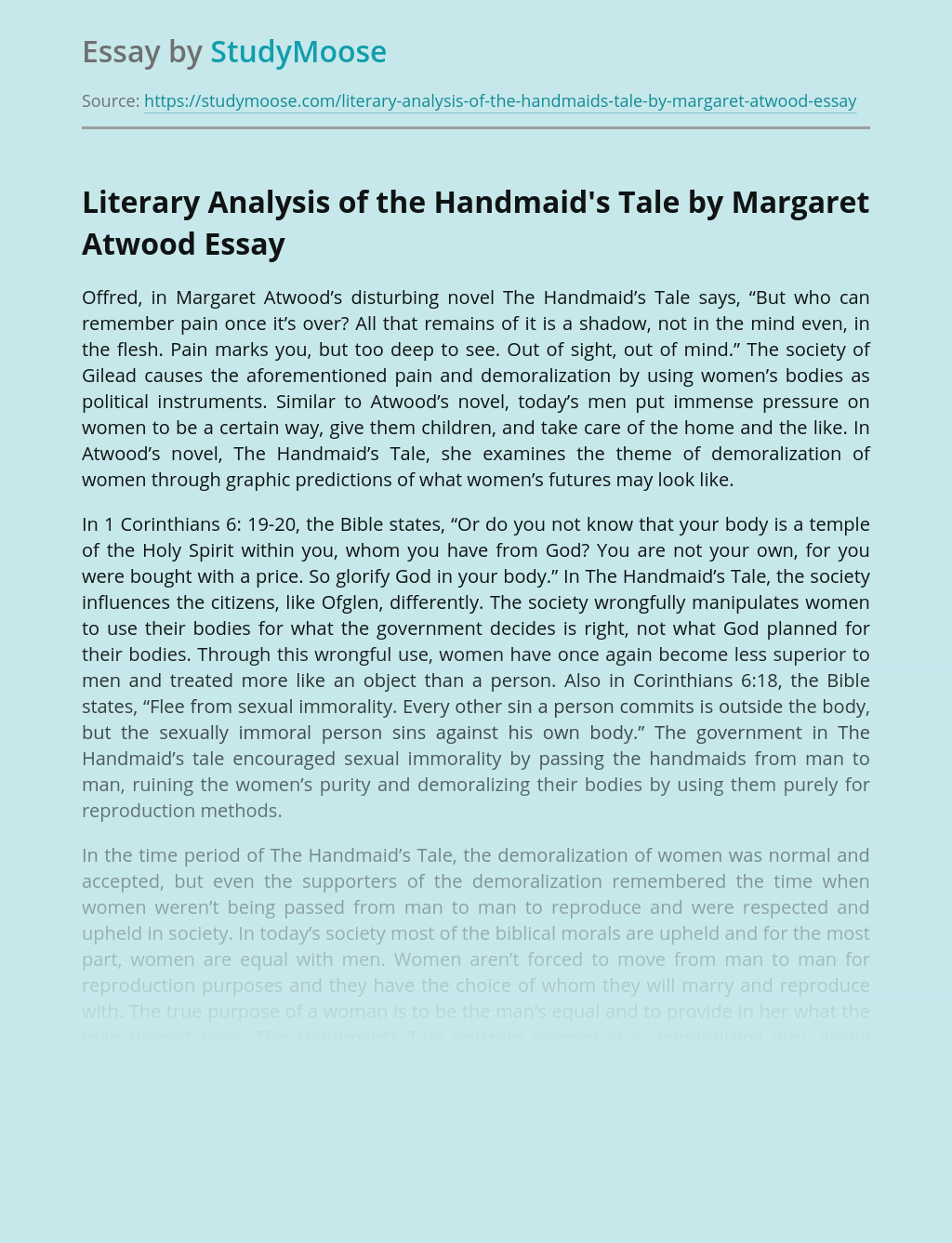 Turn in your highest-quality paper
Get a qualified writer to help you with
“ Handmaid’s Tale Novel Reading ”
Get high-quality paper
Helping students since 2015
Stay Safe, Stay Original