Han and Roman Attitudes Toward Technology

Technology is an important aspect in all civilizations, and depending on the point of view looked at the opinions vary greatly. Especially when comparing opinions of lower class and upper class people, or gender. During the early first centuries of the Han Dynasty and Roman Empire there were a lot of mixed feelings toward technology. Depending on whose opinion you heard the answer would vary between negative and positive outlooks. Most opinions seemed to have been based off of the following categories, practicality, citizen’s use, and beauty.

Turn in your highest-quality paper
Get a qualified writer to help you with
“ Han and Roman Attitudes Toward Technology ”
Get high-quality paper
NEW! AI matching with writer

Opinions varied depending on the major concern of the point of view and the class they belonged to. When opinions were weighed on practicality their major concern was the efficiency of the technology and if it was easy to use. One Han government official wrote to local officials in the early second century (B. C. E) concerning flood prevention (doc. 1). His opinion was well educated because being of an upper class and being a government official meant he was well educated, and also his opinion was of a situation he witnessed and he had proof to support his thoughts.

His opinion was unbiased and trustworthy because his concerns were not for himself but for all the people of the civilization. This is proven when he states more organization is needed in order to stay on top of issues that affect everyone of the dynasty. He felt technology was advanced enough to prevent flooding more efficiently but there needed to be a greater effort into establishing a greater number of water conservation offices in each district.

Huan Tan, an upper-class philosopher in about 20 C. E also had an opinion weighing on practicality (doc. 3). Being a philosopher you can assume he was well educated and therefore his opinion is educated. Huan’s point of view was based on practicality because he had a positive opinion on technology due to the efficiency and usefulness of tools and the fast progression of it. He proves the technology is efficient by stating facts like that the pestle and the mortar were modified and were made capable of allowing the weight of the whole body to be used. Since Huan included these sorts of facts it shows he’s well educated in the area of technology.

Overall Huan Tan had a very positive outlook on technology, feeling that it evolved at a steady pace. The source History of the Early Han Dynasty was a government sponsored source that comes from the period of about 200 C. E. (doc. 4). This opinion is clearly biased and untrustworthy because its government sponsored and therefore was written to support the government and make it look successful. This is proven when the governor of Nanyang, Tu Shui is made to look good by the statement that he improved technology because he loved his people so much he wanted to make life easy as possible for them.

Although this point of view is untrustworthy it is still weighed on practicality due to the supposed concern of the efficiency and having technology be beneficial without having to do much work. The last opinion formed by practicality was one of a Seneca upper –classman philosopher and adviser to Emperor Nero (doc. 7). This point of view again is someone of a higher class with more money and therefore does not rely on technology as much as someone of a lower class. His opinion of technology was negative; he believed tools were invented by unintelligent men.

His opinion was based off of practicality and was proven by his statement that recent inventions were not only inefficient but also were useless. He felt inventors no longer, no matter how intelligent, did not think outside the box and only tackled mild issues that were not of large concern. Overall he felt greater issues needed to be taken on by people of both intelligence and creativity. Other opinions seemed to have most concern with citizen’s use. When weighing on this, the point of view was most affected by the knowledge of who used the technology or the convenience of the access to the technology.

A government official by the name if Huan Guan has a negative outlook on technology based off of citizen’s use (doc. 2). This perspective is from an educated upper class man who therefore does not do much manual labor. Foundry work and salt boiling were at one time allowed to be done by workers as long as they followed two conditions, they has to report they were doing so and they had to pay a tax. During the earlier time the tools that were used to do these jobs were made by families and were efficient and well-made.

Later on the state forced citizens to only use the iron tools manufactured by them, which were nonfunctional. This is known as convict labor, and in doing so they also monopolized the salt and iron trades. This issue angered Huan Guan because this caused the salt and iron prices to rise and made it so lower class citizens could not afford to buy either. Huan felt technology was being weakened by the government and that making it more difficult for families to continue their businesses was not right.

Another opinion based off of citizen’s use was one of a Cicero upper-class Roman political leader of the first century (B. C. E. ). This opinion comes from an upper class man who does not do any handy-work and therefore cannot state and accurate opinion on technology. He believed there was a fine line between the difference of a “gentleman” and a man. He felt certain jobs were degrading to men, such as manual labor or “handy work”. He states, “Vulgar and unbecoming to a gentleman are all the jobs hired workers take on…” (doc. 5).

He feels the work they do is paid by the labor they do and not the skill of their work. In conclusion he doesn’t see any importance in the area of technology, also he doesn’t necessarily have a negative nor positive opinion he just doesn’t value it, h cares more about his status. The last source weighed on citizen’s use is one from Frontinus, a Roman general, governor of Britain and water commissioner for the city of Rome (doc. 8). His opinion is biased because he is governor of Britain and therefore feels his civilization is the most advanced and has the greatest technology because he is in charge of it.

This is shown when he says that Roman technology exceeds any other including both the Egyptian’s and the Greeks. Frontinus feels that the works of those two civilizations are useless, he states, “Compare such numerous and indispensible structures carrying so much water with the idle pyramids, or the useless but famous works of the Greeks. ” He feels only Roman technology has both the beauty aspect while still being efficient. He feels his technology is so successful because the aqueducts were so successful they made it possible for people of any class to have an abundance of water, which proves his opinion was based on citizen’s use.

Lastly, some opinions were made by the beauty of technology. Very simply this is when the point of view is confirmed by the appearance rather than the efficiency or usefulness of the technology. Plutarch, a Greek-born Roman citizen and high official of the second century describes Gaius Gracchus a Roman political leader of the first century’s opinion on technology (doc. 6). This source is unreliable because it is not a primary source and therefore is not as reliable because the opinion could have been slightly altered by misinterpretation or on purpose.

The major concern according to this source, of Gaius Gracchus was the appearance of everything and not the usefulness of it; he wanted everything to be pleasing to the eye. All roads were straight; both sides of bridges had to be “equal and parallel height with the result that the road for its entire course had a level and beautiful appearance. ” (doc. 6). Overall the appearance was the greatest factor when it came to Gaius Gracchus. Again just as all the other documents the point of view belonged to an upper-class male, we have no opinions from a woman or someone of a lower class.

Out of all the documents the point of view missing in order to truly decipher the overall attitudes towards Han and Roman technology is the opinion of a lower class person such as a peasant. All the documents come from the perspective of an upper-class male. Therefore the ultimate attitude toward the technology of Han and Rome cannot be determined. Each documents perspective varied depending on how they made their opinion, whether it was weighted on practicality, citizen’s use, or beauty.

Han and Roman Attitudes Toward Technology. (2016, Oct 03). Retrieved from https://studymoose.com/han-and-roman-attitudes-toward-technology-essay 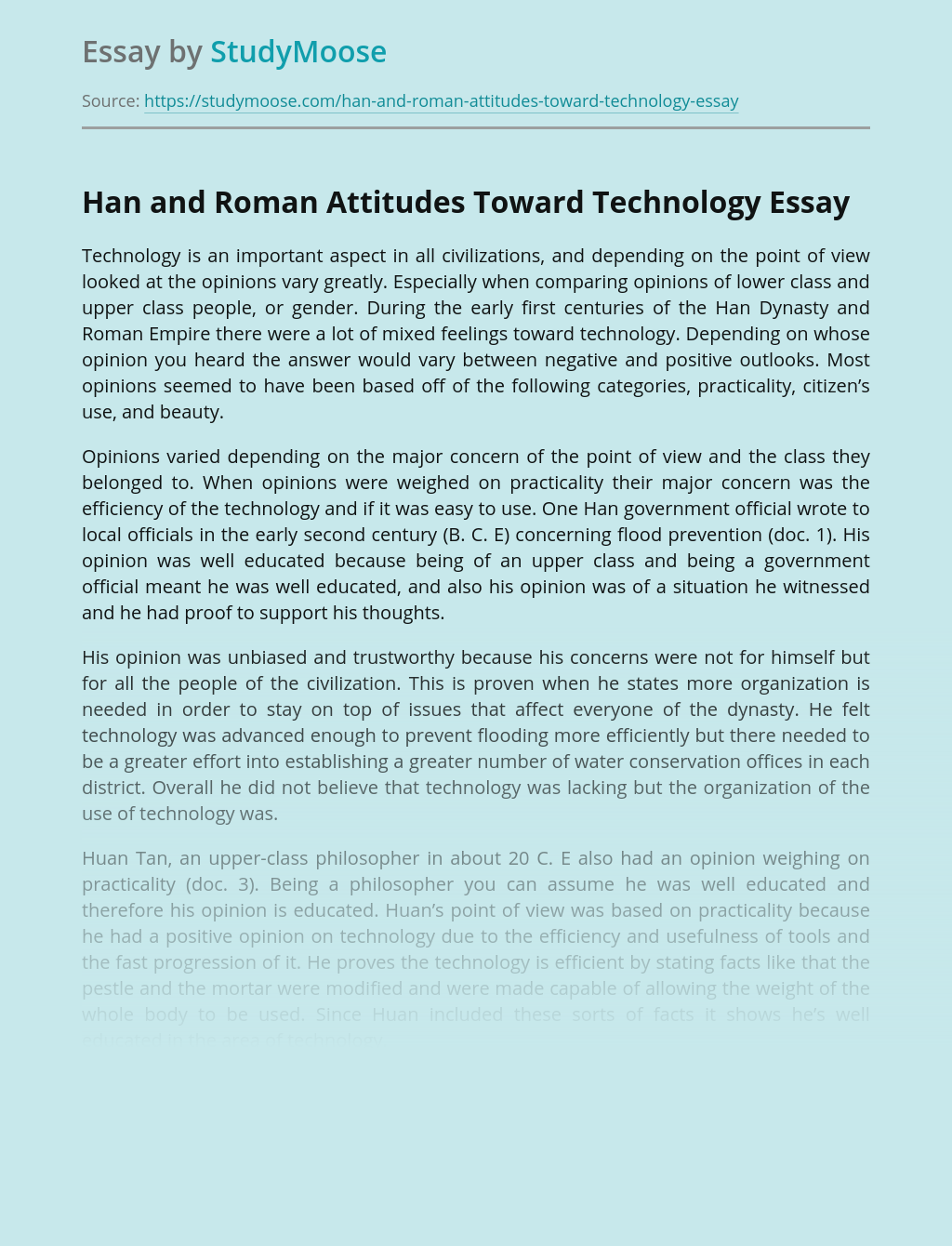 Turn in your highest-quality paper
Get a qualified writer to help you with
“ Han and Roman Attitudes Toward Technology ”
Get high-quality paper
Helping students since 2015
Stay Safe, Stay Original