I decided to do this research work because I have enjoyed a lot reading this play: Hamlet. The inner motivations and psyche of this character have captured my attention. Therefore, the aim of this research is to depict Hamlet’s attitudes during the play. I will try to approach to his real feelings on life and death taking into consideration what critics and researchers have said about Hamlet.

In order to clarify Hamlet’s personality and behaviour, I will provide some aspects of the historical context in which Shakespeare was inspired to write this play, and a brief summary of it to take into account the plot.

Don't use plagiarized sources. Get your custom essay on
“ Hamlet’s Psychological Aspect ”
Get custom paper
NEW! smart matching with writer

Finally, I will make a conclusion in which I will try to summarise the most important impressions of this research.

Historical Context of the play

Shakespeare wrote Hamlet in the last years of the reign of Queen Elizabeth 1, who had been the queen of England more than forty years. As she had no children the question of who would succeed her was a situation that provoked anxiety at that time.

Due to this fact, researchers agree that many of Shakespeare’s plays from this period concern transfers of power from one monarch to the next. Another important issue dealt with in his plays is the general sense of anxiety, fear, uncertainty, betrayal and revenge. For instance, Hamlet displays all the themes mentioned above.

Shakespeare was able to sum up the most impotant values of the Renaissance. Cultural phenomenon that began in the fifteenth-century and proclaimed the humanism: a new thought that revalued the social and popular aspect of life.

People who belonged to the Renaissance period claimed that human beings lived in a world of appearances, in which they tried to hide their realities, that is to say, their deepest desires and what they actually were.

Hamlet had to face one of the most difficult realities: injustice. A task that presents a dilemma to him: “to be or not to be”. While pointing out questions that cannot be answered, the play as a whole chiefly demonstrates the difficulty of knowing the truth about other people: who are guilty or innocent, which their motivations and feelings are.

Brief Summary of the play

Shakespeare begins the play with the death of the King of Denmark and the possession of the throne by the King’s brother Claudius, instead of the King’s son, that is to say the prince Hamlet, who was supposed to be the next in line. What is more, the new king Claudius suddenly married Gertrude, the dead king’s widow. Thus, the prince Hamlet got depressed by the unexpected situation.

One night, Hamlet’s father appears as a ghost to tell Hamlet that he had been murdered by his own brother Claudius, that is to say, Hamlet´s uncle. In his anger, Hamlet decides to fulfill his father’s request, which is to avenge his death.

In order to confirm what the ghost has said, Hamlet organizes a play in which he represents the assessination scene. While the play is being performed, Claudius stands up and goes out feeling guilty. At the moment, Hamlet confirms the truth and discusses the situation with his mother. As Hamlet notices that someone is spying on them behind the curtains, he stabs his sword without checking who this person is. As a result, he kills Polonius, Claudius’s chief councillor.

When Ophelia, Polonius´s daughter, is informed about her father’s death she reacts with madness and eventually falls in a stream and drowns. After that, Laertes, Ophelia’s brother, is told that Hamlet is involved in Polonius’s death and Ophelia’s madness. Therefore, he wants to avenge his father’s and sister’s death trying to eliminate Hamlet.

As Claudius promised Laertes to help him with the revenge, they plan to kill Hamlet as if by accident with a poisoned sword in a fencing match. Claudius also plans to offer Hamlet a poisoned drink during the fight.

When the fencing contest begins, Hamlet’s mother Gertrude drinks the poisoned drink before Caludius can stop her and she dies. Hamlet turns away and Laertes wounds him with the poisoned sword, but Hamlet goes on fighting. During the struggle, they exchange swords and Hamlet wounds Laertes, who confesses the plan telling Hamlet that he is also sure to die from the effect of the poison. After hearing the truth, Hamlet stabs Claudius with the poisoned sword and forces him to drink the poison, too.

Finally, while Hamlet is dying by the effect of the poison, he orders one of his friends called Horatio to tell the terrible story of the happening to everyone. 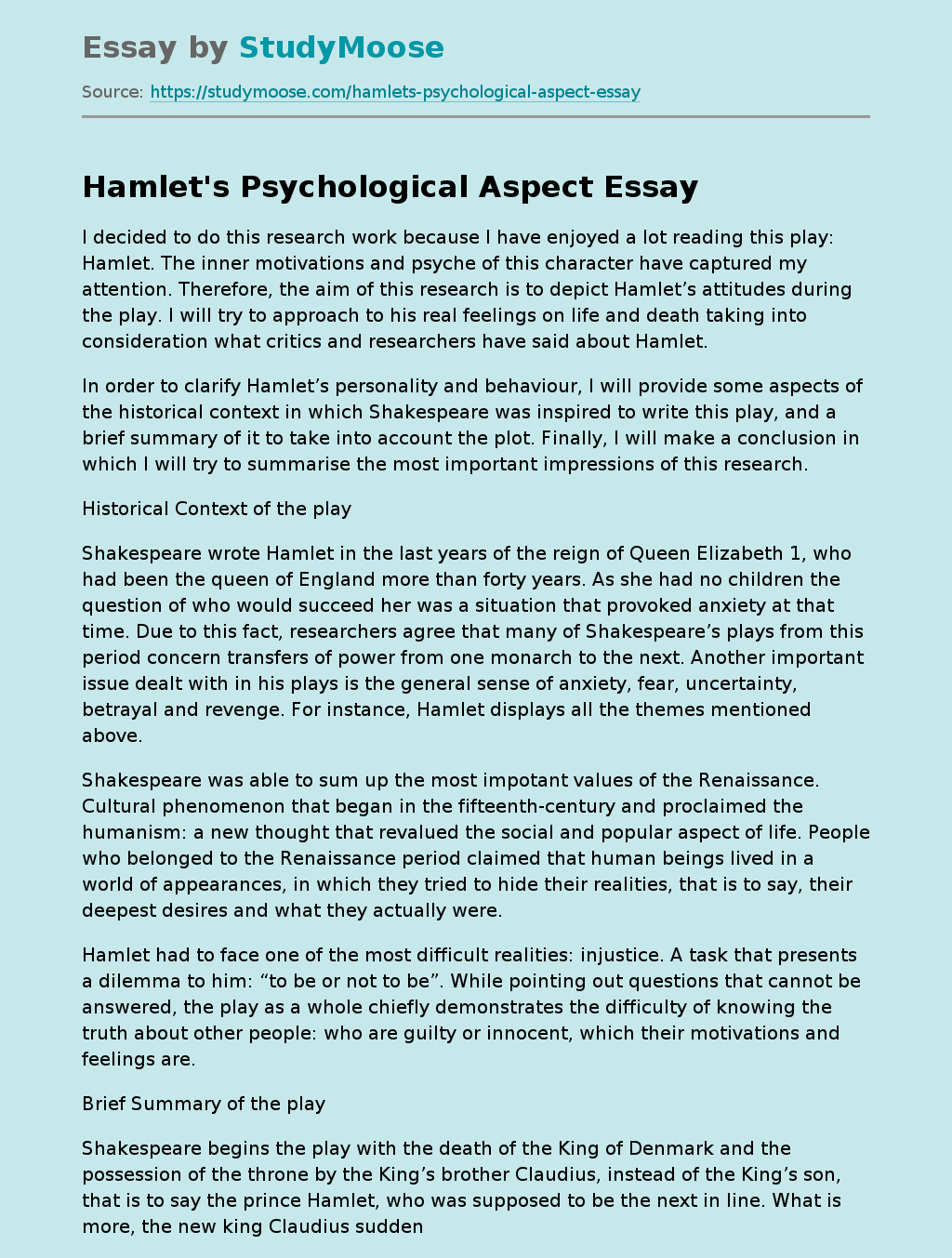