Rate this post
1. What are the gravediggers debating over?
Ophelia and suicide, and whether she should have a christian burial.
2. How does the gravedigger answer Hamlet’s questions? (lines 125-145)
He doesn’t answer the questions at first, but makes plays on words. As if he is taking Hamlets questions literally.
In lines 58-59 Hamlet gives a reason as to why he does not feel guilty about Rosencrantz & Gildensterns deaths. What is it?
They got themselves involved by agreeing to follow him and spy on him.

Don't use plagiarized sources.
Get Your Custom Essay on Hamlet Study Guide ACT 5 with answers Just from $13,9/Page

Get custom paper
3. How does Hamlet react to the skull that the gravedigger shows him? Why? (lines 186-199)
He knew the person and he reminisces about him. He talks about the equality achieved through death.
5. About how old is Hamlet? (lines 145-173)
30
4. What does the gravedigger state about England?
The people are so crazy, they won’t know if he’s crazy.
What is Hamlet’s relationship to the man whose bones have been removed from the grave?
Yorick was the court jester at King Hamlet’s court when Hamlet was a child.
6. Describe Laertes and Hamlet’s actions at the funeral.
They argue about who loved Ophelia more.
Hamlet says he will fight Laertes in order to prove what?
He loved Ophelia the most.
7. Relate Hamlet’s musings on the skulls to his earlier reference to man as a “quintessence of dust” (Act 2, Scene 2).
Both times he relates that death is the great equalizer among the classes.
How is Hamlet’s attitude toward death in this scene different from that in his earlier speeches?
He is not afraid, but is resigned to the inevitability of death.
Scene 2:
1. What does Hamlet relate to Horatio? (lines 15-29)
The events on the ship, he switched the letters, etc.
Osric tells Hamlet about a bet between Laertes and Claudius. What is this bet?
Claudius has been Laertes 5 horses that Hamlet can beat him in a fencing match.
Did the bet actually take place? Explain.
No, it is part of a plan to get Hamlet to fight Laertes so he and the king can kill Hamlet.
2. What is Hamlet’s response to the challenge?
He will do whatever the king wants him to do.
4. What is Horatio’s opinion about Hamlet’s above response? (lines 220-222)
He thinks he will lose.
Why does Hamlet think he can win the match against Laertes?
Because Laertes has been in France, and he (Hamlet) has been practicing every day.
5. What is Hamlet’s state of mind just before he goes to fence with Laertes? In answering, consider these questions: Is Hamlet still troubled by his conscience? Does he still seem to want revenge? Does he still fear death?
He says that his death is inevitable and will come either now or later. His conscience appears to be clear and he is no longer afraid of dying.
6. What is Hamlet’s attitude toward Laertes at the beginning of the match?
He asks for forgiveness. He seems resigned to whatever happens.
7. How do the deaths of the Queen, King, Laertes and Hamlet come about? What do you think is the significance of the slaughter in this scene?
Queen drinks the poison made up by Claudius that was meant for Hamlet. Hamlet kills Claudius as a result. Laertes scrapes Hamlet with his poisoned sword and this causes him to begin to die. The swords get mixed up, and Hamlet ends up with Laertes’ poisoned sword, and stabs him in the chest.
8. As Hamlet dies, what does Horatio agree to do?
Tell his story.
9. Who arrives at the end of the play? What is his reaction to what he finds in Denmark?
Fortinbras and a messenger from England. Fortinbras is saddened by the chaos and death.
10. Why do you think Fortinbras orders that Hamlet be given a soldier’s burial?
Fortinbras believes Hamlet would have been the king and a good one. 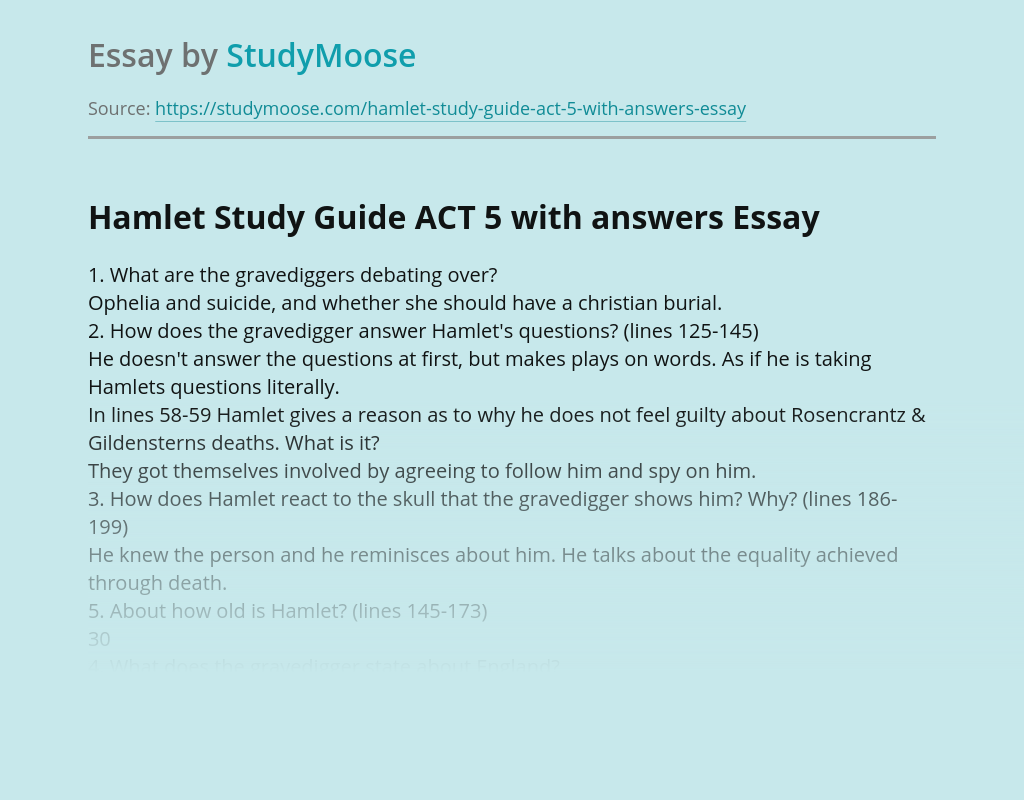 Rate this post Abstract In many cases, a person must choose between two or more “rights” that may or may not align with both one’s moral and ethical standards. The care-based, rule-based, ends-based thinking to arrive at a decision rather than rationalizing after the fact are necessary for analyzing ethical dilemmas (Hughes, Ginnett, & Curphy,...

Get Essay
Preoccupation with Death in Hamlet

Rate this post “Hamlet” is a play permeated with death. Right from the opening scene of the play death is introduced, where the ghost of Hamlet’s father introduces the idea of death and its consequences. Preoccupation with death is a major theme in this play as shown in the numerous deaths of the main characters...

Are Gertrude and Ophelia merely pawns in the world of Hamlet?

Rate this post ‘Are Gertrude and Ophelia merely pawns in the world of Hamlet? Explore the plays representation of femininity, paying close attention to the role and function of each of these two characters in the play’. William Shakespeare’s ‘Hamlet’ can be seen as a chess game bought to life. The play depicts the events...

Theme of Revenge in Hamlet

Rate this post In the play Hamlet written by William Shakespeare, several characters attempt to lure their foes into their death as payback for any wrongdoing. This highlights the main theme of revenge in the play. Revenge is a constant theme throughout the plot. Not only does it underlie almost every scene, but it also...