The Ghost tells Horatio that Norway will soon attack Denmark.
False
Arrange the events below in chronological order.
Bernardo relieves Francisco of guard duty.
Marcellus tells Bernardo that Horatio does not believe their story about the apparitions.
The Ghost of Hamlet’s father appears, but stalks away when Horatio commands it to speak.
Marcellus asks Horatio why such a strict nightly watch has been set at Elsinore.
Horatio explains that Fortinbras has raised an unlawful army to avenge his father’s death.

Get a verified writer to help you with Hamlet Notes

The Ghost reappears, but leaves without speaking when the cock crows.

What have you learned about young Fortinbras’s personality, even though you have not yet met him?
He seems very determined in his resolution.
He is swift to act.
The present king of Norway is aware of Fortinbras’s activities.
true
The Ghost speaks only to Hamlet and not to Marcellus and Horatio.
false
Arrange the events below in chronological order.
Hamlet, Horatio, and Marcellus wait for the Ghost on the platform before the castle.

Hamlet learns that Claudius took his father’s life, wife, and throne. According to the last three lines of the scene, Hamlet is happy for the opportunity to avenge his father’s death.
false
Polonius believes Hamlet has gone mad because Ophelia no longer returns his love. Relying on what you learned in Act I, select other possible reasons for Hamlet’s strange appearance and behavior in Scene 2 of Act II.
Hamlet has said that he may at times pretend to be mad.
His uncertainties about his mother’s loyalties makes him test Ophelia’s as well.
What is the specific news that Voltemand and Cornelius bring to Claudius?
The King of Norway has ordered Fortinbras to direct his attention towards the Poles
Choose all the conflicts that are present in the play by the end of Act II.
between Hamlet and Claudius
between Hamlet and himself
between Hamlet and Gertrude
between Denmark and Norway
between Hamlet and Ophelia
Arrange the events below in chronological order.
Rosencrantz and Guildenstern tell Claudius that they still do not know the cause of Hamlet’s behavior.
Claudius and Polonius hide themselves and listen in on Hamlet’s conversation with Ophelia.
Claudius decides that Hamlet’s madness is not caused by neglected love and that he is dangerous.
Polonius suggests that he will hide and listen as the Queen talks with Hamlet.
Arrange the events below in chronological order.
Hamlet tells Horatio to watch Claudius during the play.
The players present a “dumb play” in which a king is poisoned and his wife is won by the murderer.
The players perform the play up to the poisoning scene.
Claudius cries out “Give me light” and leaves.
Polonius comes to tell Hamlet that his mother wants to see him.
Arrange the events below in chronological order.
Claudius tells Rosencrantz and Guildenstern to take Hamlet to England.
Polonius reports that Hamlet has gone to see Gertrude.
Polonius will eavesdrop on the conversation between Hamlet and Gertrude.
Alone, Claudius tries to pray.
Hamlet passes up his opportunity to kill Claudius.
Arrange the events below in chronological order.
Claudius learns of Polonius’s death.
Claudius sends Rosencrantz and Guildenstern to find Hamlet and calls a council meeting.
Hamlet will not tell Rosencrantz and Guildenstern where he has put Polonius’s body.
Claudius’s soliloquy reveals that orders have been called for Hamlet to be killed as soon as he arrives in England.
Fortinbras and his army pass through Denmark on their way to Poland.
Arrange the events below in chronological order.
Gertrude sees Ophelia in her madness for the first time.
Claudius sees Ophelia in her madness for the first time.
Laertes sees Ophelia in her madness for the first time.
Claudius takes Laertes aside to explain about Polonius’s death and burial.
Arrange the events below in chronological order.
Horatio receives a letter from Hamlet.
Claudius receives a message from Hamlet saying that Hamlet will see him tomorrow.
Laertes and Claudius make plans for Hamlet’s death.
Gertrude tells Claudius and Laertes that Ophelia has drowned herself.

Get a verified writer to help you with Hamlet Notes 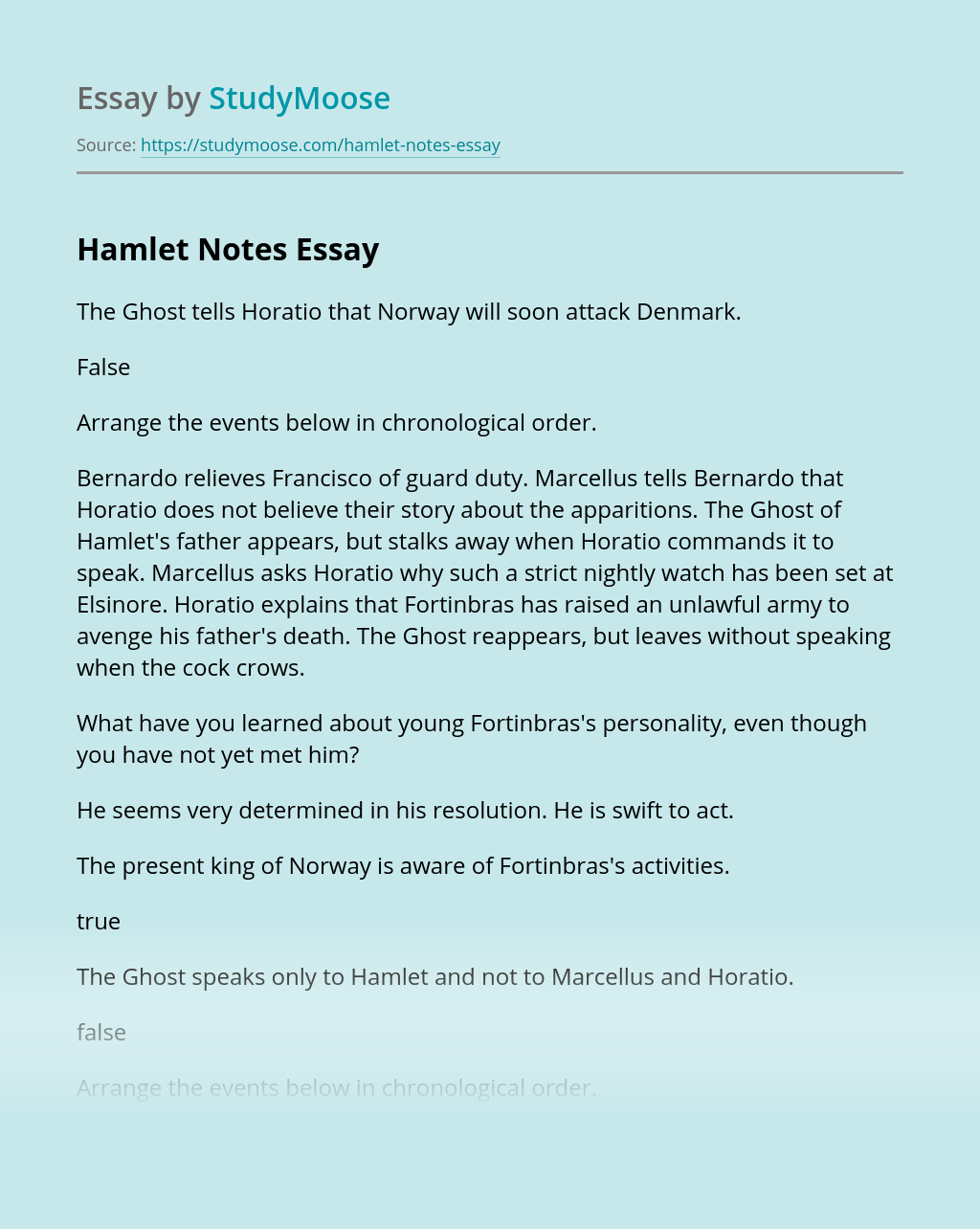 Which words describe Ophelia in the excerpt? Check all that apply. Muddled Illogical Melancholy Hamlet stages a performance about a murder to discern Claudius’s guilt. This is part of Hamlet’s Rising action In Act IV of the play, Hamlet stabs Polonius. In what ways does this event move the plot forward? Check all that apply....

Macbeth and other Elizabethan plays represented a radical shift in English drama because they were Not about religious themes During the Elizabethan period, theater companies began to use permanent performance spaces What important role do the witches play in Act I They foreshadow events Is a long speech, usually made by a character who is...

1. What are the gravediggers debating over? Ophelia and suicide, and whether she should have a christian burial. 2. How does the gravedigger answer Hamlet’s questions? (lines 125-145) He doesn’t answer the questions at first, but makes plays on words. As if he is taking Hamlets questions literally. In lines 58-59 Hamlet gives a reason...

“Give first admittance to the ambassadors; My news shall be the fruit to that great feast” metaphor “Whereon old Norway, overcome with joy, gives him threescore thousand crowns in annual fee, and his commission to employ those soldiers” metonymy (old Norway = substitute for uncle of Fortinbras) “Words, words, words” epizeuxis “Doubt thou the stars...