Comparative Analysis Essay Dorsal Gray & Hamlet Throughout the play Hamlet we see the themes of obsession and good vs.. Evil, Hamlet struggles with his Inner demons until his tragic and untimely death. In the novel The Picture of Dorian Gray we meet a character that Is very similar to Hamlet In his continuous struggles with his good vs.. Evil persona and obsession with youth, Many character Is Oscar Wild’s, Dorsal Gray represent those of Hamlet.

Both Dorsal Gray and Hamlet who have love Interest that both happen to die In the midst of Hamlet and Grays battle within them selves.

Don't use plagiarized sources. Get your custom essay on
“ Hamlet Gray or Dorian Hamlet ”
Get custom paper
NEW! smart matching with writer

All though not all characters are represented you see a pattern with the minor character that help show the tragic hero’s true intentions. Both Hamlet and Dorian Gray struggle with obsession through their lives. While Hamlet’s is more of an obsession with avenging his father’s death while Dorian Gray obsesses over youth and beauty.

Hamlet is obviously the more likable character but is makes you wonder how did Oscar Wiled make his audience able relate to Dorian, a greedy, evil and selfish human being? Although Hamlet had a peculiar way of showing his love and devotion to his father the reader an still understand why he would seek revenge and obsess over his death, Shakespeare shows us Hamlet’s true intentions with his famous and lengthy soliloquy.

Dorian Gravy’s entire philosophy is based off selfishness. Hamlet, unlike Dorian feels guilt for is crimes until the death of Claudia while Dorian Gray puts himself in a false sense of security, while his conscience often thinks about repenting he slowly falls deeper and deeper into evil with the help of The Yellow Book and Lord Henry.

Good vs.. Evil is large contrast in both novels; both characters suffer with their Evil did but only Hamlet makes an attempt to redeem himself.

Towards the end of his life Hamlet attempts to apologize for the deaths of Alerts father and sister, Aphelia and Polonium, He is even upset about the death of Alerts whom he didn’t mean to kill. Dorian Gray on the other hand hardly mourns for the death of his ex-fiance© Sybil, and takes great relief in the deaths of James, Sibyl’s brother who comes to avenge her death, his admirer Basil and former friend Alan. While he tries to hide his hypocrisy by constantly false repenting his portrait continues to grow In horror and eventually shows the transformation of what an evil soul he has become.

Hamlet, the tragic character who finally realizes toward the end of the play all the pain and suffering he has caused apologizes, dying and noble and honorable death. Dorsal that Is neither honorable nor noble. Although the reader could see that Dorsal Grays last action before death is his way of showing guilt. He can no longer stand the stain Dorian and Hamlet both resemble the obsessive and even murderous side but where they differ is that Hamlet has a conscious unlike his counterpart, Dorian Gray 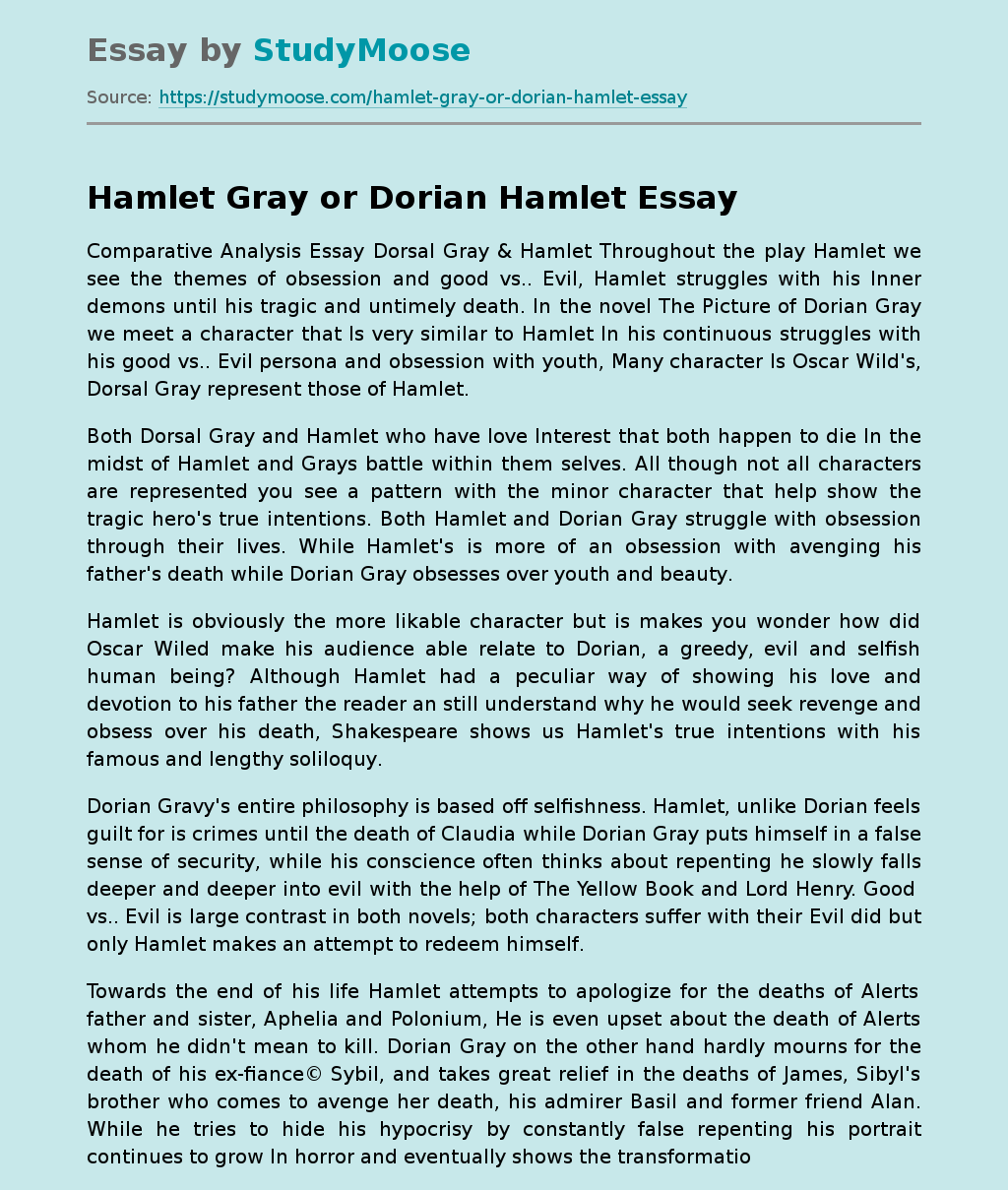