Polonius sends Reynaldo to Paris. Polonius wants to learn about what his son is doing in Paris because he wants to spy on his son.
What does Polonius send Reynaldo? Why?
Polonius thinks that Hamlet is mad because he’s crazy with love for Ophelia and she is ignoring him so he is depressed.
Why does Polonius think Hamlet is “mad”?
Claudius asked them to come to the castle to find out what’s bothering Hamlet. Then, they can try to help him.
Don't use plagiarized sources. Get your custom essay on
“ Hamlet Act II and III ”
Get custom paper
NEW! smart matching with writer
Why have Rosencrantz and Guildenstern come to the castle?
He wants Hamlet and Ophelia to meet. Polonius is going to spy on them.
What is Polonius’ plan for testing his theory that is love-crazy?
He thought that the world was wonderful but life is terrible. People don’t interest him.
Rosencrantz and Guildenstern finally meet with Hamlet, and Hamlet discovers they were sent for by the King. How does Hamlet describe his personal problems to them? What does he tells them?
He’s going to have to put some of Hamlet’s lines in here.
Get quality help now
Marrie pro writer

He is going to have him change some of the play. Reenact how his father was murdered to see how Claudius reacts.

What arrangement does Hamlet make with Player 1?
He’s a coward and a dreamer because he hasn’t made any plans to kill his uncle. He has an idea that if the players act out his father’s murder King Claudius will confess his crime of killing King Hamlet.
After Rosencrantz and Guildenstern leave Hamlet what does he basically say in his soliloquy?
Hamlet is confused but he doesn’t say why and won’t talk about how he feels.
Get to Know The Price Estimate For Your Paper
Topic
Number of pages
Email Invalid email

He doesn’t give them straight answers. King Claudius tells them to encourage Hamlet’s interest in the play. They also told him that Hamlet is interested in the theater troop.

What message do Rosencrantz and Guildenstern carry to the King? What is the King’s response?
He talks about whether it’s better to live or commit suicide. He would kill himself but he’s worried about what happens after a person dies especially if they commit suicide. It’s against the Catholic religion to commit suicide and that’s why people live and suffer because they are afraid of life after death.
Hamlet’s famous “To be or not to be” soliloquy is in scene one. In a sentence or two paraphrase his main points.
Hamlet’s tone is angry. He tells Ophelia to become a nun and not get married. Ophelia shouldn’t have children because children become people and they become terrible people. Hamlet is not making sense to Ophelia.
Describe Hamlet’s tone when he speaks to Ophelia.
Claudius doesn’t think that Hamlet is love-crazy. He doesn’t even think he’s crazy. He think’s he’s sad. Polonius still thinks that his madness was caused by unrequited love for Ophelia. King Claudius decides to send him to England to get back the money that the King of England owes to the King of Denmark. Polonius wants Hamlet to talk to his mother to find out his secret and Polonius will hide and listen to their conversation.
What do the King and Polonius decide about Hamlet’s condition after eavesdropping on Hamlet and Ophelia?
Hamlet wants the players to perform a scene similar to what he thinks happened to his father. Hamlet and Horatio are going to be watching King Claudius to see if he acts guilty. If he doesn’t act guilty then the ghost was a devil and wasn’t telling the truth about his father’s death.
Why does Hamlet give instructions to the players?
The King stopped the play. Hamlet and Horatio decided that means that the King was guilty of poisoning King Hamlet like the ghost said.
What was the King’s reaction to the play, and what did Hamlet and Horatio decide his reaction meant?
The Queen wants to talk to Hamlet before he goes to bed. The Queen is surprised about Hamlet’s behavior.
What message does Rosencrantz deliver from the queen?
The King wants Rosencrantz and Guildenstern to prepare to go to England with Hamlet on diplomatci business. The king thinks that Hamlet is getting crazier and he has to protect the country from the danger of Hamlet’s craziness getting out of control.
The King has Rosencrantz and Guildenstern prepare to do what? Why?
Hamlet doesn’t kill the King when the King is kneeling because he is praying to repent his sins, killing the King and marrying the Queen. If he dies now he will go to heaven. King Hamlet couldn’t go to heaven because he didn’t repent for his sins. It’s better if he waits for the king to sin before Hamlet kills him then King Claudius will go to hell.
Why doesn’t Hamlet kill the King when the King is kneeling?
Polonius dies because he was hiding behind the tapestry. Then, Hamlet heard yelling from behind the tapestry and he stabbed his sword through the tapestry and killed Polonius.
How does Polonius die?
Hamlet wants his mother to stop having sex with King Claudius. He also wants her to confess her sins to God and repent her sins. He doesn’t want her to tell the King that Hamlet’s craziness is not real.
What would Hamlet have his mother do?
Marshall Hammond
Share 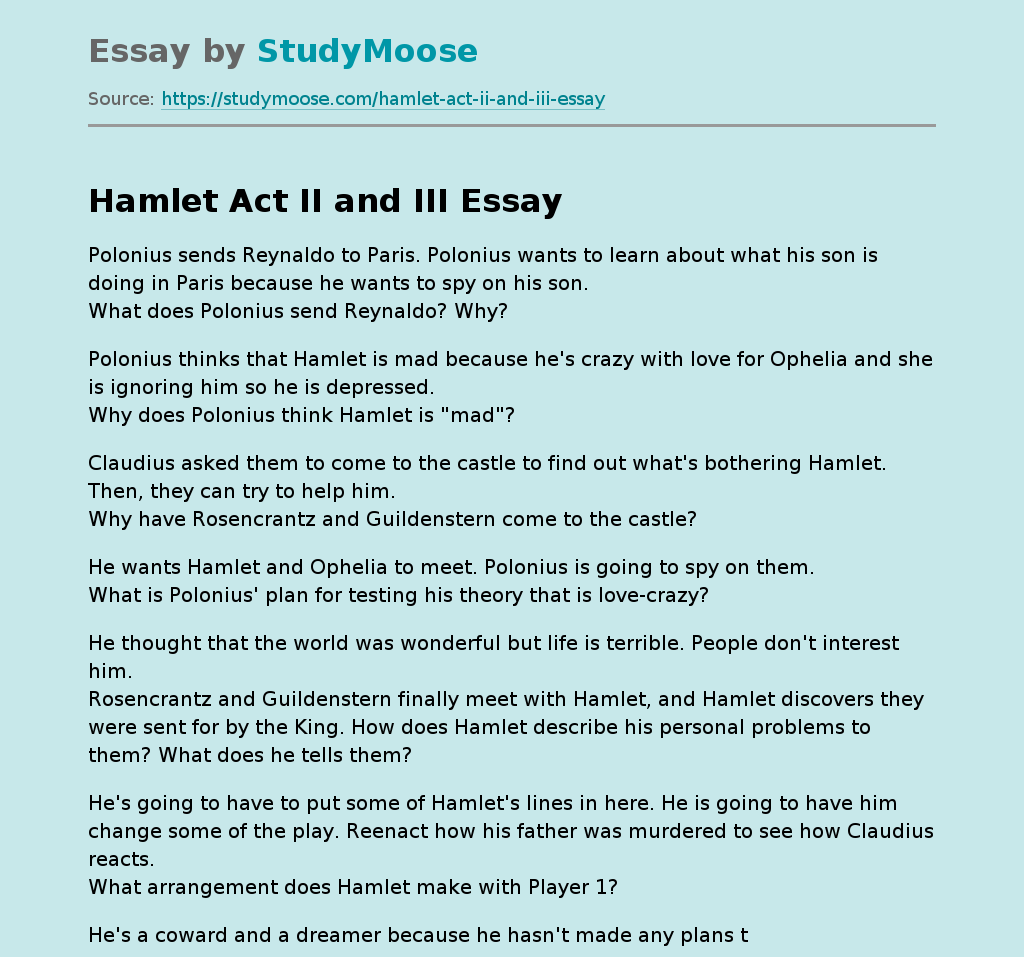