-A series of events develop the plot’s central conflict.
-Suspense builds gradually as the plot progresses.
>Which statements describe the rising action of a tragedy’s plot?
-Hamlet wants to kill Claudius, but he wants to be sure Claudius will suffer.
>Which statement best describes Hamlet’s complexity in the excerpt?
-His erratic behavior confuses his friend.
>Hamlet’s character is complex in the excerpt because
-A visit from his deceased father.
>In Shakespeare’s Hamlet, what plot event prompts Hamlet to become suspicious and resentful?
-Polonius is sacrificing his daughter to trick Hamlet.

Don't use plagiarized sources.
Get Your Custom Essay on Hamlet Just from $13,9/Page

Get custom paper
>In the excerpt, Hamlet calls Polonius Jephthah, after the priest in the Old Testament who sacrifices his daughter to God. What does this allusion suggest about Polonius’s treatment of Ophelia?
-Although she is queen, Gertrude is caught between her powerful husband and bitter son.
>Which statement is a feminist analysis of these lines?
-Which words does the actor emphasize?
-What gestures and movements does the actor make?
-What emotions does the actor convey?
>What should audience members ask themselves when they evaluate how an actor interprets a character?
-Diction
>To analyze tone, the reader should study word choice, which is also called
-Time period it was written in
>Historical criticism considers a text’s relationship to the
-The character experiences a variety of human emotions.

>Which ideas describe a round character?
-In contrast to Gertrude, Hecuba is the ideal image of a grieving widow.
>Which statement best explains why Shakespeare alludes to Hecuba throughout Act II, Scene ii of Hamlet?
-How do the parts of the text relate to the whole?
>Which question is most likely asked by a reader analyzing a text through a formalist lens?
-Become a tragic hero and the story will have an unhappy ending.
>By evaluating the dramatic conventions in the excerpt, the reader can conclude that Hamlet will
-He is distraught and unsure.
>What does this part of the soliloquy reveal about Hamlet?
-Cautious
>Shakespeare’s word choice in the passage creates a tone that is 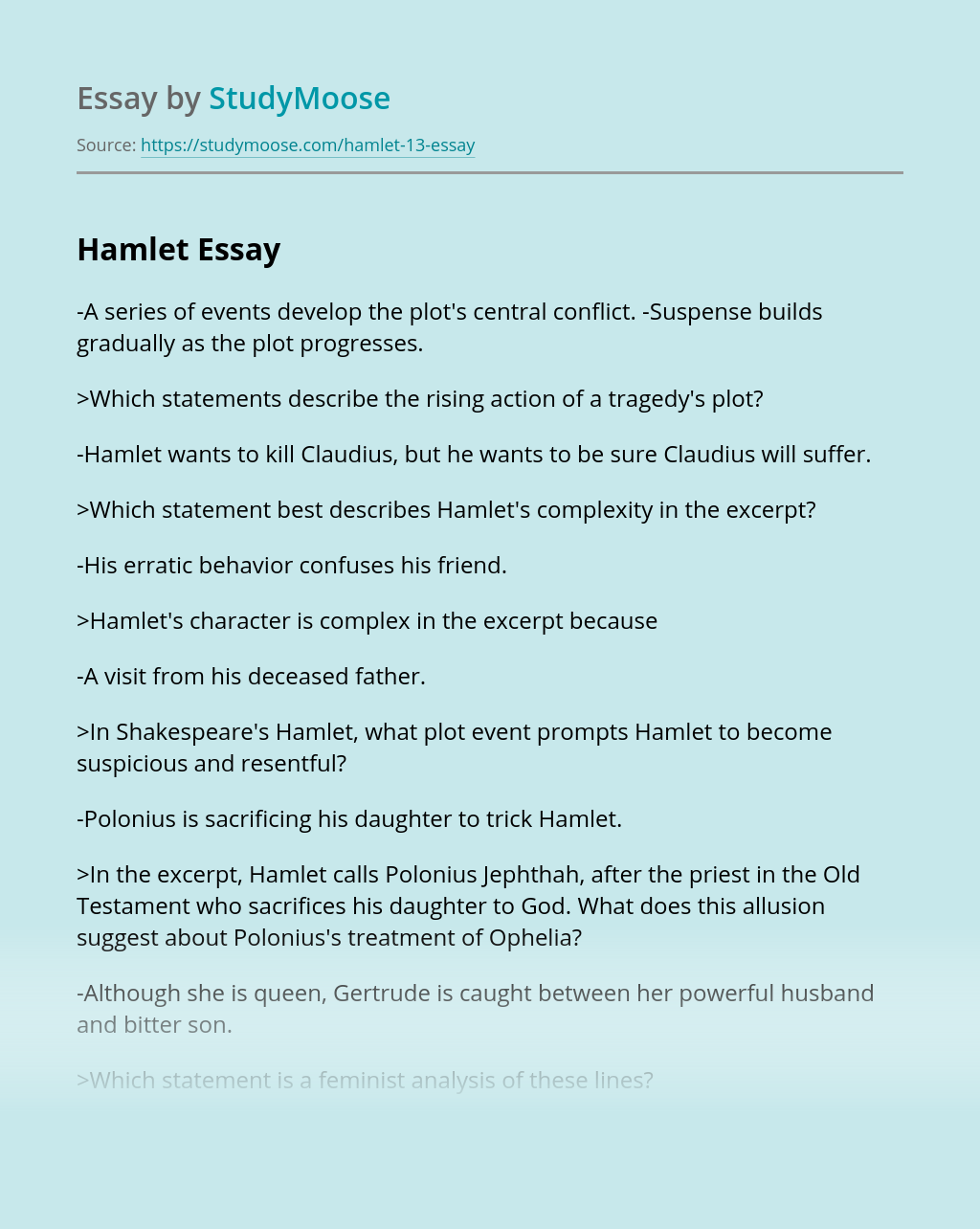 Act 4 starts with a discussion of hamlet’s behavior between Claudius and Gertrude. What is it that Gertrude says she has seen? Hamlets madness How does Gertrude describe polonius’ death to Claudius? Hamlet heard something behind the tapestry (Polonius), he cried out “rat,” killed the rat (Polonius) “O come away! My soul is full of... VIEW ESSAY

– Eugene has written 28 plays. His most famous works include The Lesson (1951), The Chairs (1952), and Rhinoceros (1959). -Eugene has been recognized as a leading writer in the Theatre of the Absurd. His plays break theatrical archetypes of plot and sequence; explore mortality, and introduce existential conundrums while utilising over imaginative, unrealistic and... VIEW ESSAY

View sample
How does the impossibility of certainty affect Hamlet?

What differentiates Hamlet from other plays from Shakespeare is that the action we expect to see, and particularly Hamlet’s action, is continually postponed while Hamlet tries to understand the truth about his father’s death and about what he should do. This play poses a certain number of questions that other plays would have taken for... VIEW ESSAY

“A man doesn’t become a hero until he can see the root of his own downfall” Tragic hero’s who fit under Aristotle’s depiction are known as ‘Aristotelian Tragic Hero’s’ and possess five specific characteristics; 1) A flaw or error of judgment (also known as ‘hamartia’ which is a fatal flaw leading to the downfall of... VIEW ESSAY