What impact did the Haitian Revolution of the 1781-1804 have on Haiti and the wider Caribbean? The Haitian revolution had started for several reasons the collapse of the French monarchy, the existence of a large mixed race-class and the extreme conditions in St Domingue. The revolution led to the complete abolition of slavery in St Domingue. It brought about the emergence of some influential leaders such as Toussaint L’ouverture a domestic slave who became a steward of all the livestock on his master’s estate, Boukman Dutty who was a Jamaican born who practise vodun (voodoo).

He was sold by his British master to a French plantation whose owner but him as a slave driver, Jean Francois was a fugitive from the North America who became a maroon long before the revolt began, Jorge Biassou was a son of slaves.

He commanded the army of 40,000 slaves and Jean Jacques Dessalines he was born in slavery who later became the Emperor of Haiti.

This severely changed Haiti’s economic status. The country’s infrastructure, such as roads harbours and bridges, was destroyed and sugar production. In 1971 73,000 tons of sugar was exported by 1804 this had drop to 20,500 tons which led to changes in Haiti’s changes in Haiti’s agricultural policies. This also led to the exodus of whites from the island and despoliation of the land Conflict and Neglect had impoverished the ‘Pearl of the Antilles’. Haiti became the first free black coloured state in the Caribbean. The political impact Haiti had on itself was long term but it was not good.

In the late 18th century Haiti (St Domingue) began to show an uprising with enslaved Africans for their rites. This uprising in the 18th century Haiti transpired initially due to levels of unrest between the resident white planters and free coloureds but was ultimately triggered by the enslaved Africans’ overwhelming desire for freedom and equality with both groups. Despite these similar encounters, this would be the first successful rebellion among the enslaved Africans in the Caribbean. The Haitian revolution was one in which had a great impact on both Haiti and the wider Caribbean economically.

The Haitian revolution had an impact on the Caribbean economically and it was also used by abolitionist to justify their anti-slavery views. Cuba, Jamaica and Puerto Rico received planters of St Domingue and were able to use the skills of these émigrés to boost their economic success. In the years of the revolution it motivated several Caribbean countries Jamaica, St Vincent, Grenada in 1795 causing minor revolts in these islands. The constant decline of St Domingue’s coffee and sugar industries offered the opportunity of increased prosperity in these sectors in other regional colonies, as well. The shortage of sugar in Europe following the outbreak of the Haitian revolution, favoured the British West Indies in the immediate post –Revolutionary years by increasing prices in the English and European market. 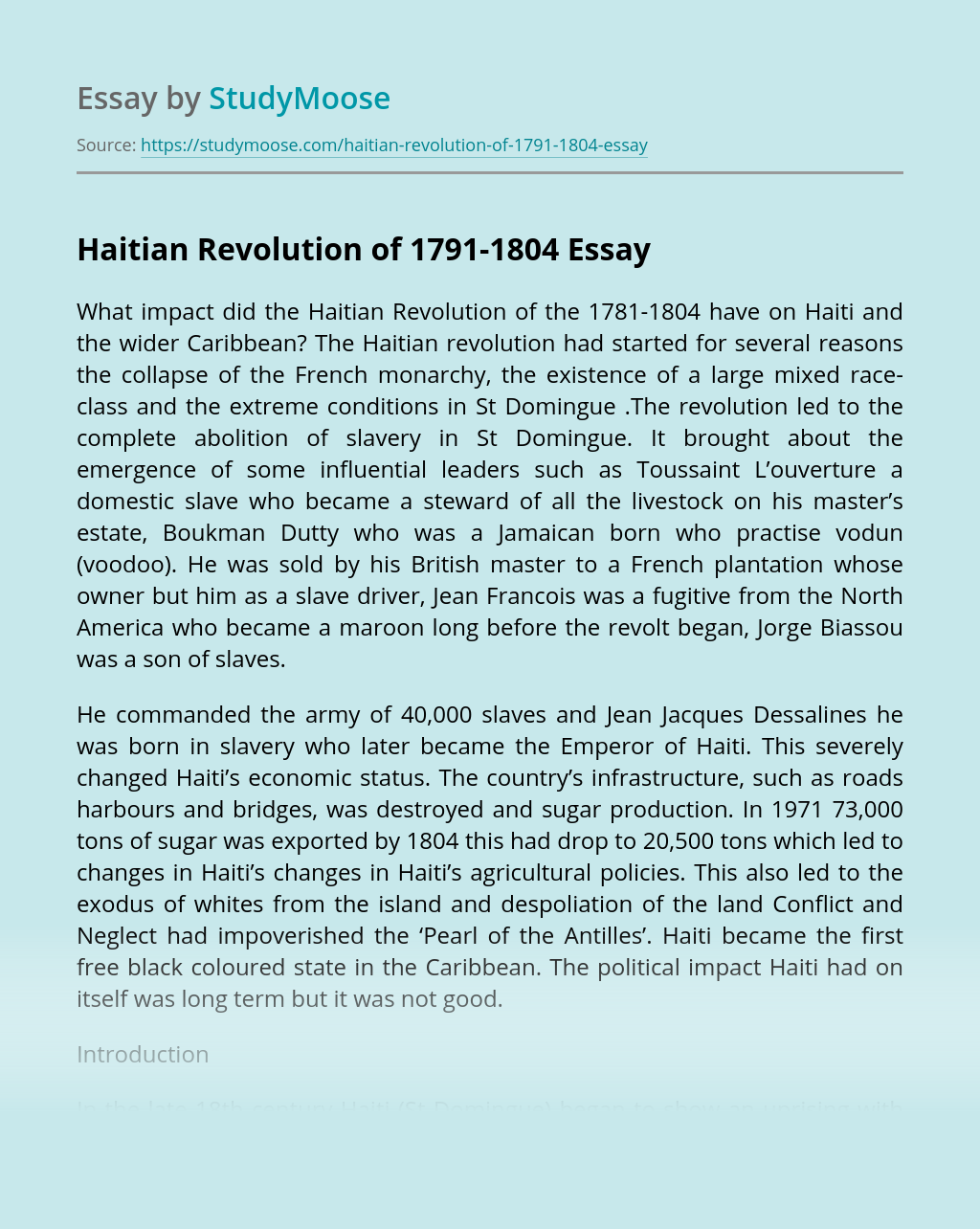 Due to the end of slavery, the demand for cheap labor in the Americas partnered with multiple peoples willing to leave their home countries to create an influx of indentured servants. These unfortunates, though seeking a better life, often ended up facing awful conditions for the duration of their contract. Document three shows the beginnings...

Prior to David Walker’s Attract the Colored People of the World during the 1800’s, there had not been any other type of anti-slavery documents released. Although the Appeal is directed to black servants, its effective moral message and indictment of white America’s hypocritical society and oppressive, ruthless system of slavery is an ethical message that...

The Virginia Slave Codes date all the way to early 1600s. During the 17th century, indentured servants, who decided to work for an affirmed amount of time in replace for their means of access to the “New World”, were a handy resource of manual labor for the American colonies. Both blacks and whites served under...

Indentured Servants in the Chesapeake Colonies

The life of the indentured servant was at best hazardous and full of pitfalls. There was not one sole factor that would determine the life success or failure of this class of people, but a instead it was determined be a series of random qualities and experiences. For example, as we will see with John...

Causes of the Rebellion There are several reasons for the 1831 revolt in Jamaica. One of the main reasons given for the revolt was that the enslaved was led to believe that emancipation was being withheld. In Jamaica reports spread among the slaves that their “free paper” had come from England but their masters were...

Analyze the Social and Economic Transformations

Between 1492 and 1750, the new contacts between Western Europe, Africa, and the Americas, socially and economically transformed the Atlantic world. New worlds were discovered, the population was escalating due to the slave trade and booming economy, and the industrial production advanced from man-made to machine-made. The new contacts among Western Europe, Africa, and the...

In the mid-1960s, Malcolm X said, “If you stick a knife nine inches into my back and pull it out three inches, that it not progress. Even if you pull it all the way out, that is not progress. Progress is healing the wound, and America hasn’t even begun to pull out the knife.” And,...

Danica Jane Arduo Filipinos, especially those who grew up in well to do families, usually hire helpers/maids. Based on the article, how does this culture reflect the power struggle between Filipinos belonging to different economic status? In the article, what comes to pass is that through servitude the battle for power is totally tipped since...