Guns Should be Banned in Order to Stop Violence, Which is What They Cause

There are many who believe that guns are very necessary to own. There are people who use guns in the right way and believe that it proposes no harm. On the other hand, there are those that are totally against the use of guns and are seeking better ways to control how they are being used and owned, and in some instances, ban its use for good. Guns are very harmful and can cause extensive harm. They can kill a person instantly.

Don't use plagiarized sources. Get your custom essay on
“ Guns Should be Banned in Order to Stop Violence, Which is What They Cause ”
Get custom paper
NEW! smart matching with writer

Many countries all around the world tolerate guns and have their own regulations concerning them. They are legal but only to some extent. There are people who use guns properly and legally. There are also those that own guns and misuse them or use them for wrong reasons. They are very dangerous weapons and can take lives instantly because of their powerful impact. There are many cases, especially in the United States, where people have been killed or murdered because of the use of guns, innocent people.

Guns give these bad people too much power because all their victims are helpless. Plus, many of these murders have not been solved. These guns have taken lives of numerous people who have left their family sad, broken and incomplete. Guns are very, very harmful and should be illegal and have stricter laws.

Palau is a very small island nation that is fast-developing. It is known around the world for its abundant natural resources and marine life. Sadly, guns are a part of the society and there have been instances where they were misused.

Palau has many endemic creatures that are soon to be extinct and for this reason, the Palau Conservation Society (PCS) has banned several nesting grounds, which are parts of forests all over Palau, and informed the public that there shall be no catching or killing these animals at these areas. However, people still kill these endangered species despite the law and what they usually use to do so are guns. Forest rangers are trying to stop these people and charge those they catch with fines. The first big incident that involved guns happened three decades ago when this weapon was used in the assassination of Palau’s first president, Haruo I. Remeliik. After this incident took place, the tiny Pacific nation of Palau considered tightening gun laws. Palau already has strict control on guns, with only the military and police allowed to possess firearms and ammunition. Just recently, there was a criminal case where a man known as Morgan Mira brought a gun to Palau High School(PHS), the only public high school in Palau that has more than seven times as much students as any of the private high schools in Palau, to threaten a student. This incident was one of the scariest. It shook the island of Palau and everyone was talking about it. As I have mentioned earlier in this paragraph, there have been three decades since the last gun related case occurred so you can imagine the shock when everyone learned of it. I interviewed Mr. Ngirarois Rechemang, a student of PHS, and asked him about what he knew of the incident and how he felt being in danger at that time.

Interviewer: Were you at school when this incident happened?

Mr. Rechemang: Yes I was. It was around three when it happened and I remember I was hanging out with my friends under the tree in front of the school office.

Interviewer: Did you see what happened?

Mr. Rechemang: No I didn’t. I heard about it the next day and I was shook because I know the student who was threatened and I can imagine if it were me and that’s so scary.

Interviewer: Was this situation taken seriously?

Mr. Rechemang: Yes, the school principal called an assembly and informed us about it and said they were doing all they could to settle the incident and make sure we are all safe.

Guns have been part of our world for a very long time. The first successful gun was invented by Richard Jordan Gatling and used by Union forces during the American Civil War in the 1860s. To this day, structures of guns have improved and there are many different types of them. Palau looks up to the United States of America and follows almost everything they do or come up with. From currency to the Constitution and even to way of life, Palau always follows what the United States does. Knowing that, we know that we are greatly influenced by them and as a result, we have adapted guns as part of our society. Guns have been a problem in the States and now it has become a problem in Palau. It was taken seriously after what happened to the late Haruo I. Remeliik, and a law that prevented its use was established. Despite that being done, people were still purchasing these firearms illegally and using them in our society. Firearms are very dangerous and should not be owned and used by any other except for policemen and the military. Guns being part of the world we live in have caused fear and helplessness amongst us that we cannot control. Therefore, even though they are illegal, the Ministry of Justice should do a better job catching those who misuse guns and confiscate whatever firearms are found. These weapons should not be taken lightly and action has to happen today in order to ensure a safer community for us to live in as well as the future generation. Guns should be banned in order to stop violence, which is what they cause.

Guns Should be Banned in Order to Stop Violence, Which is What They Cause. (2021, Feb 11). Retrieved from https://studymoose.com/guns-should-be-banned-in-order-to-stop-violence-which-is-what-they-cause-essay 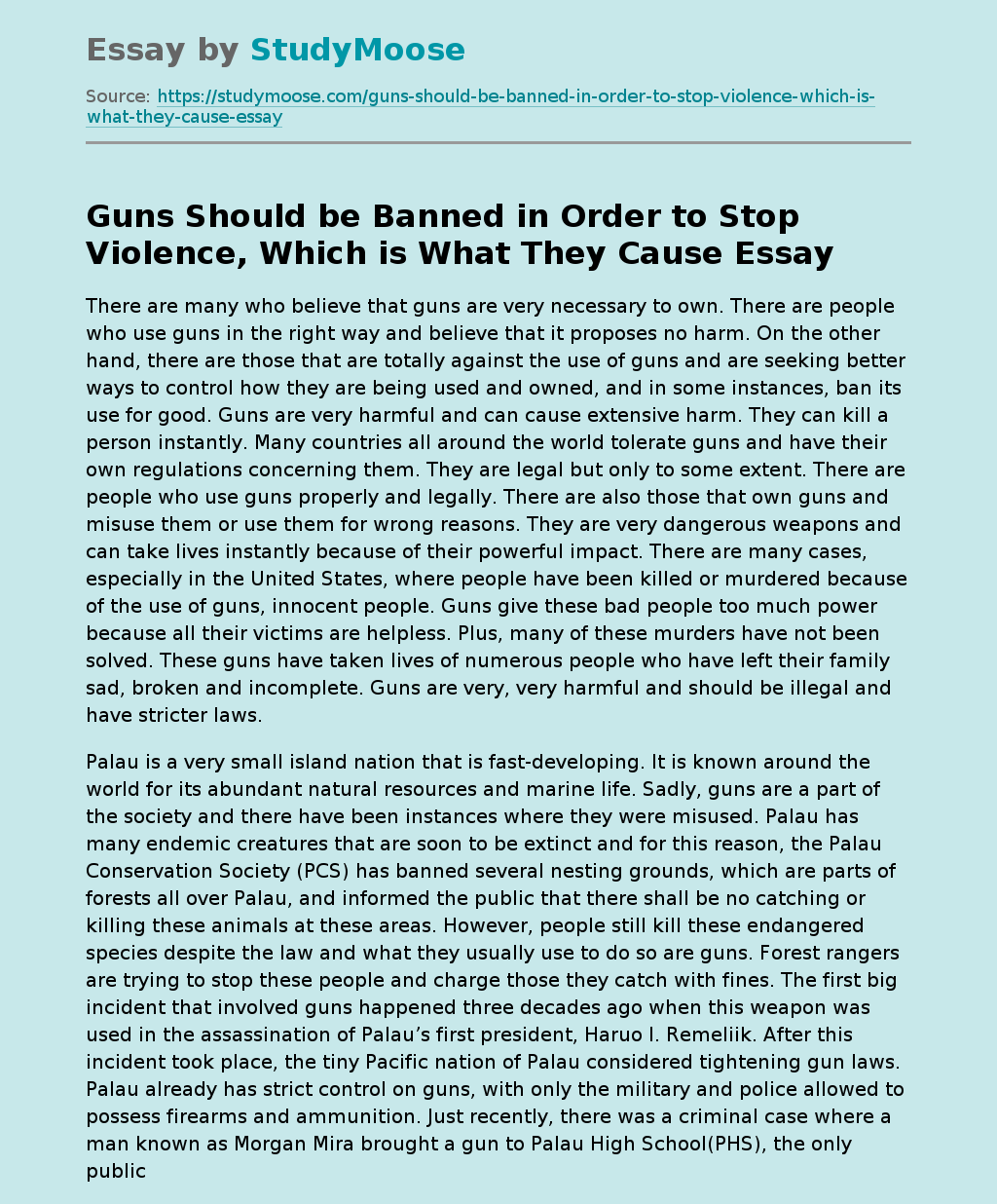