Guns Should Be Banned

Handguns are the cause of so many deaths amongst the people of the world today. In the past few months there have been so many awful tragedies due to the access we all have to guns. The repercussions of gun violence make up 50 percent of today’s disasters claiming lives ranging from babies to adults and even elderly. The government needs to make guns less accessible, and the law along with the law enforcement need to really enforce the laws they make.

Don't use plagiarized sources. Get your custom essay on
“ Guns Should Be Banned ”
Get custom paper
NEW! smart matching with writer

You can find more details below: Argumentative Essay Examples. This is a very serious issue we must tackle globally, and not just in Australia.

The school massacre in Connecticut caps off a year of killings in the US with men having committed 16 mass shootings in locations including health spas, a night club, a high school, a hospital, a funeral home, a university, a coffee shop, a soccer field, a cinema, a shopping mall and a primary school! Politicians say that the victims are in our thoughts and prayers, but what can be done to prevent such horrors in the future? I believe that too many lethal weapons are available to too many people.

Most US states have no owner licensing or gun registration, no requirement to provide a good reason to own a gun, no ban on semi-automatic assault weapons and no limit on the number of guns a person can own. Thanks to the reforms to our gun laws after the 1996 gun massacre in Tasmania, Australia has all of the above.

It took Australia thirty five deaths to put bans on the use of guns, which had a huge success as the number of gun deaths have dropped by half and there hasn’t been a massacre since 1996. Every year this law saved 200 lives and 500 million dollars.

Commentators in the US say they have come to see the mass killings as an inevitable feature of the American way of life, which means they know it’s going to happen again and again. But as mentioned above Australia’s experience shows that it doesn’t have to be that way. This doesn’t mean Australia is perfect though, as there are always flaws. Thirteen years after the gun reforms a woman with a history of chronic paranoid schizophrenia walked out of the Sydney Pistol Club with one of its weapons and killed her father.

It’s a scary thought that nothing is stopping a person taking a handgun from a club and using it however they want, as the reforms outlawed semi-automatic long arms, but not hand guns. Most massacres are committed by people with no criminal record or no known history of mental illness. This means you can’t predict who will be the next crazy killer to go on a rampage, therefore we need to be strict on weapon use and who can actually take or own one of their own. So if handguns or guns in general weren’t that accessible and so easy to get a hold of, most of this senseless violence would not occur.

I believe that if the proper laws are fully enforced we would have fewer criminals and much less death. For countries all around the world, it’s sad when a fourteen year old kid can get access to a dangerous firearm it’s just senseless. I know banning guns will not stop all violence as some people will go to huge lengths to still get that one weapon, but I can assure you it will have a dramatic decrease in the deaths and violence in any country around the world.

Guns Should Be Banned. (2016, Sep 08). Retrieved from https://studymoose.com/guns-should-be-banned-essay 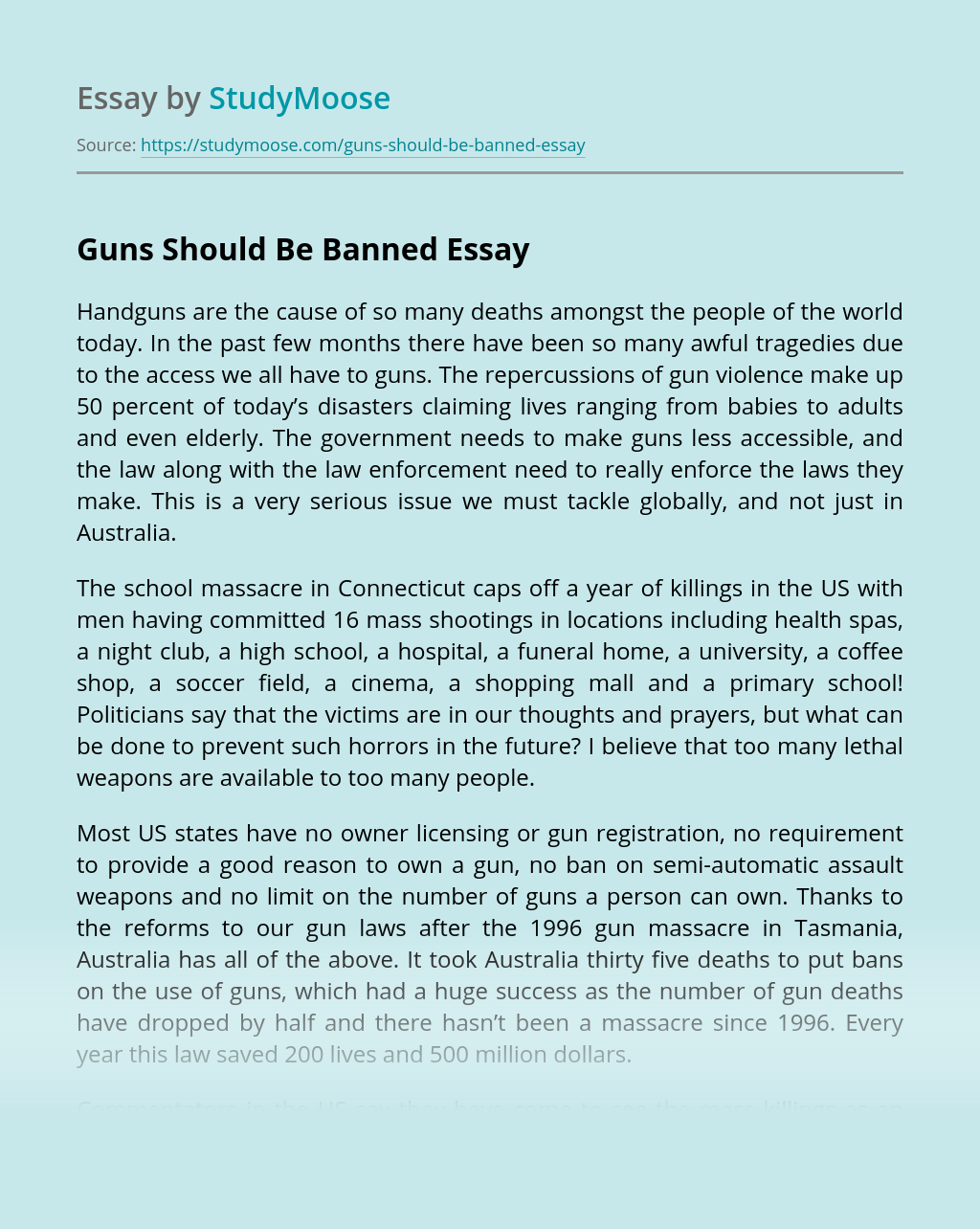