Jared diamond and his theory on how and the Europeans were so successful in their conquest of the incans. This was made possible due to the location of Europe. With the inventions of guns, and steel, along with being exposed to many germs before the incans. This gave the conquestidors many advantages over the inca. Once the Spanish conquered the Incas they had weapons that were unseen and unheard of to the indigenous. This was terrifying to the Inca community because they were unaware of the damage these weapons could cause and the power the Spanish had.

Don't use plagiarized sources. Get your custom essay on
“ Guns germs and steel ”
Get custom paper
NEW! smart matching with writer

The Spanish had been at war with the Mores for approximately 700 years. This gave them experience in fighting and also allowed them to construct the weaponry necessary for war. The Islamic were known to be the first to invent the the gun, but the Chinese invented the gunpowder. These separately were not useful, as the Chinese did not use gunpowder as a weapon. This was when the Spanish decided to combine the two and create what was known as the Harquebus.

Proficient in: Guns Germs And Steel

It was superior to any other gun known at the time. The Spanish had plenty of experience when they arrived to invade the Incas, was was not new to them. This gave them a possible advantage in weapons and fighting tactics.

Since the Spanish had been at war for so long, they found the need to create more weapons, at which time the sword was invented. This was capable stabbing and slashing with great facility.

The process of attempting to find the perfect sword took several hundreds of years. It was known as a family business, in which each person’s desire was to create a better sword than those by their ancestors. It was discovered that Iron infused with carbon was the perfect combination to creating a proper sword. The more carbon the harder the sword, but there must be a precise combination of sufficient flexibility and strength to the sword. The Rapier was seen to be that perfect sword, it was long sharp and strong. It not only became popular for war but also amongst gentlemen, this was the time at which it became common to wear your sword towards the side of your waist. These people were known to have descendants that were knights during the medieval times. There was a long process in Europe in attempting to create that perfect fighting weapon which allowed to kill many in a short amount of time. Once the Rapier was introduced it gave Spain more power in weaponry, which allowed conquistadors to have an enormous advantage. During this time of exploration, slaves were brought to the Americas from Africa and Europe. These were transported in ships, at which time it was discovered that some had diseases which were easily transmitted amongst themselves.

This became an epidemic that was brought to the new lands, and affected the indigenous people. Europe had previously gone through this disease, which was contracted by domestic animals. This caused many deaths, but those who survived became immune to these diseases. Once the epidemic arrived to the Americas, the indigenous became utterly ill. They unlike the Spanish, were not immune to these diseases because of their lack of domestic animals. Approximately 95% of the Inca population died. This completely destroyed their community, and allowed for the Spanish to conquer the lands easily and obtain their gold. The Inca’s numbers decreased almost immediately, which caused them to have a lack of power as well as army. This was an advantage to the Spanish which they used at their favor, taking over completely of the Incas. In conclusion the Europeans were able to conquer the incas easily because of geography and where they were located. They aquired guns first and the germs were around more because of the animals they lived with and how they had many years to perfect their weapons and the steel was aquired first too. 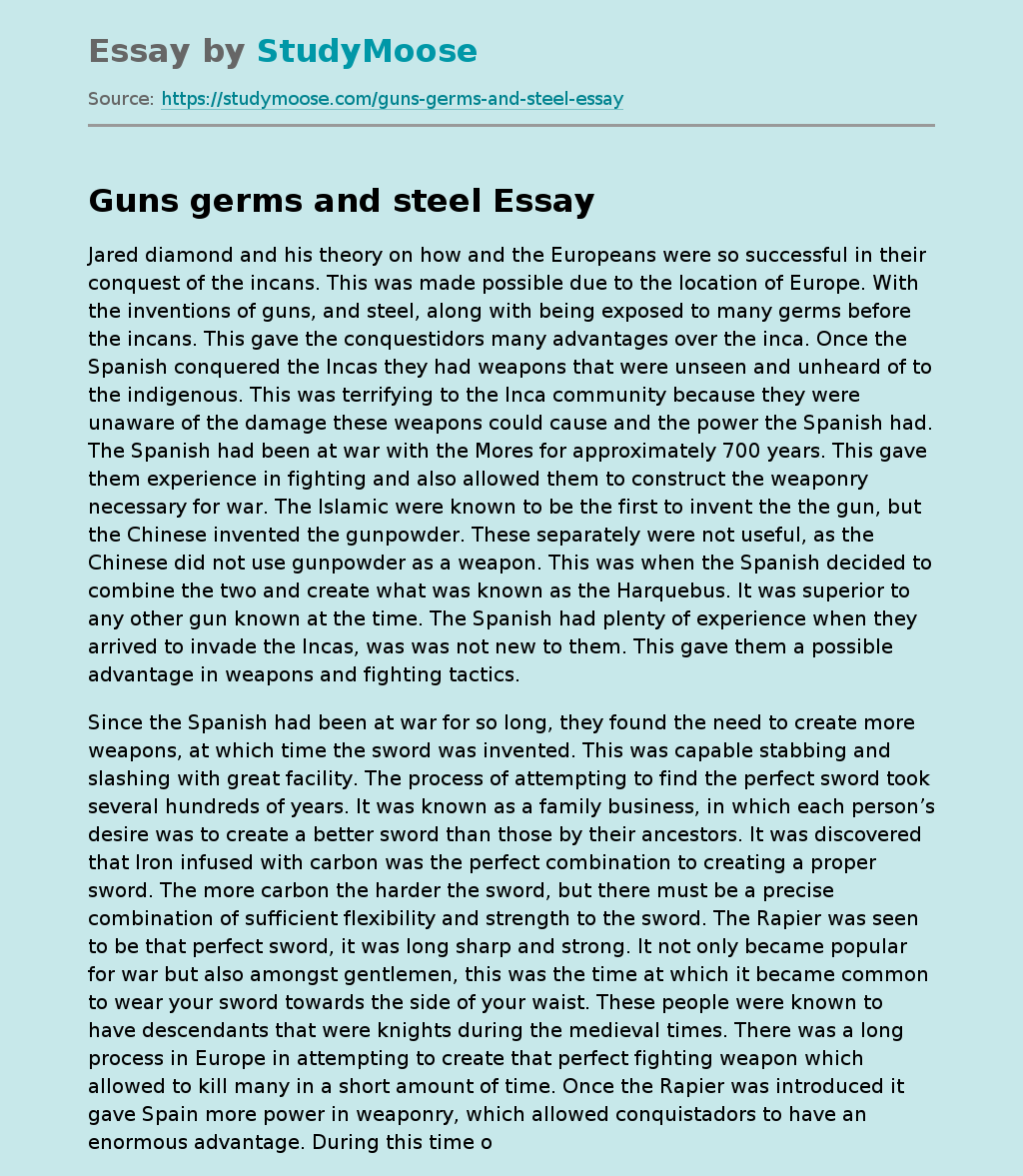