Gun Violence in the United States

“The art of war is of vital importance to the State. It is a matter of life and death, a road either to safety or to ruin. Hence it is a subject of inquiry which no account be neglected”(Sun Tzu)”. The earliest known United States shooting to happen on school property was the Pontiac’s Rebellion school massacre on July 26, 1764, where four Lenape American Indian entered the schoolhouse near present-day Greencastle, Pennsylvania, shot and killed school master Enoch Brown, and killed nine or ten children.

Don't use plagiarized sources. Get your custom essay on
“ Gun Violence in the United States ”
Get custom paper
NEW! smart matching with writer

Selling guns to dangerous predators does no good for education at all because it disrupts the learning and intellectual mind due to what the students witnessed. Shari Thornberg was having a day like any other until she walked into Sandy Hook Elementary school on Friday.

Shari was running late and fears passed the gunman, Adam Lanza enter the school for an attack that killed 20 children and 6 adults. As soon as the gunman gets caught up, he shot himself.

Some employees call on the government to stop selling guns after the school shootings. Gun-related deaths are now the third-related causes of death in America. An average of 19 children die from gunshot wounds or are treated in hospital emergency rooms every day, with boys, teenagers, and Afican Americans disproportionately affected, according to a new study that claims to be the most comprehensive analysis of childhood firearm deaths and injuries. People who are affected by guns, guns are the third leading causes of death, and people die everyday because of guns

The problem is that America will not fix gun problems by not selling it or burning it.

Guns have become a threat to society and therefore no one should be trusted using a gun. For instance, “Most firearms deaths among kids and teens were intentional, with 53 percent of deaths classified as homicides, and 38 percent deemed suicides, according to the study. Only about 6 percent of deaths involving firearms were classified as unintentional” (Huffington Post: Guns are now the third leading causes of death para 6 sent. 1-2). “Every day, 310 people are shot in the United States. Among those: 100 people are shot and killed, 210 survive gun injuries, 95 are injured in an attack, 61 die from suicide, 10 survive a suicide attempt, 1 is killed unintentionally, 90 are shot unintentionally, 1 is killed by legal intervention, 4 are shot by legal intervention, 1 died but the intent was unknown, 12 are shot but the intent was unknown”(Key Gun Violence Statistics pg 1). “Most people who attempt suicide do not die-unless they use a gun.

Across all suicide attempts not involving a firearm, less than 5 percent will result in death. But for gun suicides, those statistics are flipped: approximately 85 percent of gun suicide attempts end in death” (Gun Violence in America pg 1). “CWLA’s National Blueprint points out that children and youth exposed to chronic trauma can experience inhibited brain development, producing a lasting impact on life outcomes”(The Impact of Gun Violence on Children, Families, Communities pg 1). “Tragically, more than 35,000 people, including nearly 3,000 children, die from gun violence each year in the United States”(Gun Violence Threatens the Health of Our Nation pg 1). “According to a 2013 Kaiser Family Foundation health tracking poll, African Americans are far more likely to know a victim of gun violence or be personally worried about gun violence than white respondents. The poll found 42 percent of African Americans personally knew someone who has been the victim of gun violence, compared to only 15 percent of white respondents.

African Americans were also more than twice as likely to be personally worried about gun violence, the research found”(PTSD in Oakland: Gun Violence Victims, Families Suffer Continuos PTSD pg 1). However people might say, “Safety isn’t always safe. You can find one on every gun.”(Andrea Gibson). “Nothing is wrong with shooting… As long as the right people get shot”(Clint Eastwood). I say the critics are incorrect because “according to the Crime Prevention Research Center, so-called ‘gun free zones’ have been targets of more than 98% of all mass shootings — this is why they are often fittingly referred to as ‘soft targets'(Six Facts That show Gun Control Is Not The Answer pg 1). “In 2005, out of a total of 541 firearm-related deaths in Kentucky, 375 were gun-shot suicides (69%), homicides accounted for 143, accidents claimed 11, nine died in police shootings, and three fatalities were unspecified. During 2006 and 2007, again, approximately 70 percent of gun-shot deaths were suicides. Most Americans are unaware that gun-shot suicide occurs much more often than all other shooting deaths combined. Suicide by gun fire is the fastest growing and most common means of suicide regardless of age, gender, race, or educational level”(Guns: Dangerous Especially For Suicide, and Costly For America pg 1). Gun symbolizes fear and cowardness because they rise against anyone who degrades them. They basically live their lives in fear, and project that fear into violence in order to scare their victims.

The solution to America’s gun problem is background checks and restricting gun sales. Removing guns out of their home or passing a prevention gun bill could save lives. Here’s how the solution works. In order to purchase a gun from a federal firearms licensed dealer (FFL), a consumer must provide identification and pass a federal background check using the Bureau of Alcohol, Tobacco, Firearms and Explosives’ 4473 form. Fill out the form. The first page of the document requires basic information, including the buyer’s full name, address, sex, birthday, and ethnicity. A social security number is encouraged, but not required. The form also asks the buyer about criminal background, immigration status and mental health information that could result in a consumer being denied. Give the form back to the person who gave you the forms. The person can contact or tell you if you are denied or not.

In order to pass a bill, introduce by coming up with a great idea find a Senator or Representative to sponsor it, draft the bill, gather signatures from other legislators and then introduce your bill by dropping it in the hopper. You’ll need support from the Committee Chair if you want a hearing or at least get them interested in hearing more. If your bill receives a hearing, it’s an opportunity to bring in members of the public to show their support. You’ll need to make sure a majority of the committee supports your bill or it won’t move forward meaning a lot of meetings, phone calls, and advocacy efforts. After a bill is passed out of committee, it goes to the Rules Committee, which decides which bills will receive a vote. You’ll need to ask a member of the Rules Committee to conduct a “rules pull” so your bill can be voted upon. Once your bill makes it to the floor, you’ll need to make sure it gets a majority or it’s dead. Repeat Steps 2-5 but with the opposite house. Your bill needs to pass out of the House or Senate with the exact same wording. If that doesn’t happen because of amendments, it’s sent to a Concurrence Committee, a group of legislators who will try to reconcile the two drafts. If your bill makes it through this process it goes to the governor’s desk.

The Governor can either sign your bill, refuse to sign it, or veto it. If the Governor doesn’t sign your bill within a certain timeframe it automatically becomes a law. If the Governor vetoes the bill, it can still become law if both the House and Senate vote to override the veto requiring 2/3rds vote. For example, “Research published in JAMA Internal Medicine in early March found that strong firearms laws in a state, such as background checks for all private sales and restrictions on multiple purchases, were associated with lower rates of gun homicides”(Gun Violence in the U.S. pg 1). “Reduce firearm access to youth and individuals who are at risk of harming themselves or others. This includes keeping guns out of the hands of those who have been violent toward their partners and families, and those with previous violent convictions, whether through expanding lethality assessment and background checks or supporting domestic violence bills, and gun violence restraining orders”(Gun Violence Must Stop. Here’s What We Can Do to Prevent More Deaths pg 1). Some people might think that bavkground chechks and bills won’t work because nearly 80% of crime guns are already outside of retail distribution channels and outside of transactions made by the law abiding folks who would participate in universal background checks at gun shows .7%.

Nevertheless background checks save lives. They are the foundation of any effective effort to reduce gun violence and are associated with lower rates of gun homicides, suicides and gun trafficking in states that require them for all handgun sales. But current federal law only requires licensed gun dealers to conduct background checks on gun sales. Background checks also keeps guns out of the hands of people with dangerous histories and they are the foundation of any comprehensive gun violence prevention strategy. If we don’t act now, then we will die a lot faster. If we act now, then the solutions will be easier to solve.

The leading causes of death in America is guns. African Americans are 2.5 times more likely to be killed by a gunshot. In order to do something about the gun shootings, volunteer to protest, or donate to charity for the victims of gun shootings. If you don’t take action, then there will be more consequences and fatality. However, if you do take action, then we will feel a lot safer being outside or/and at home. Guns shootings affect almost everyone and I hope many people make a change to end guns.

Gun Violence in the United States. (2020, Nov 17). Retrieved from http://studymoose.com/gun-violence-in-the-united-states-essay 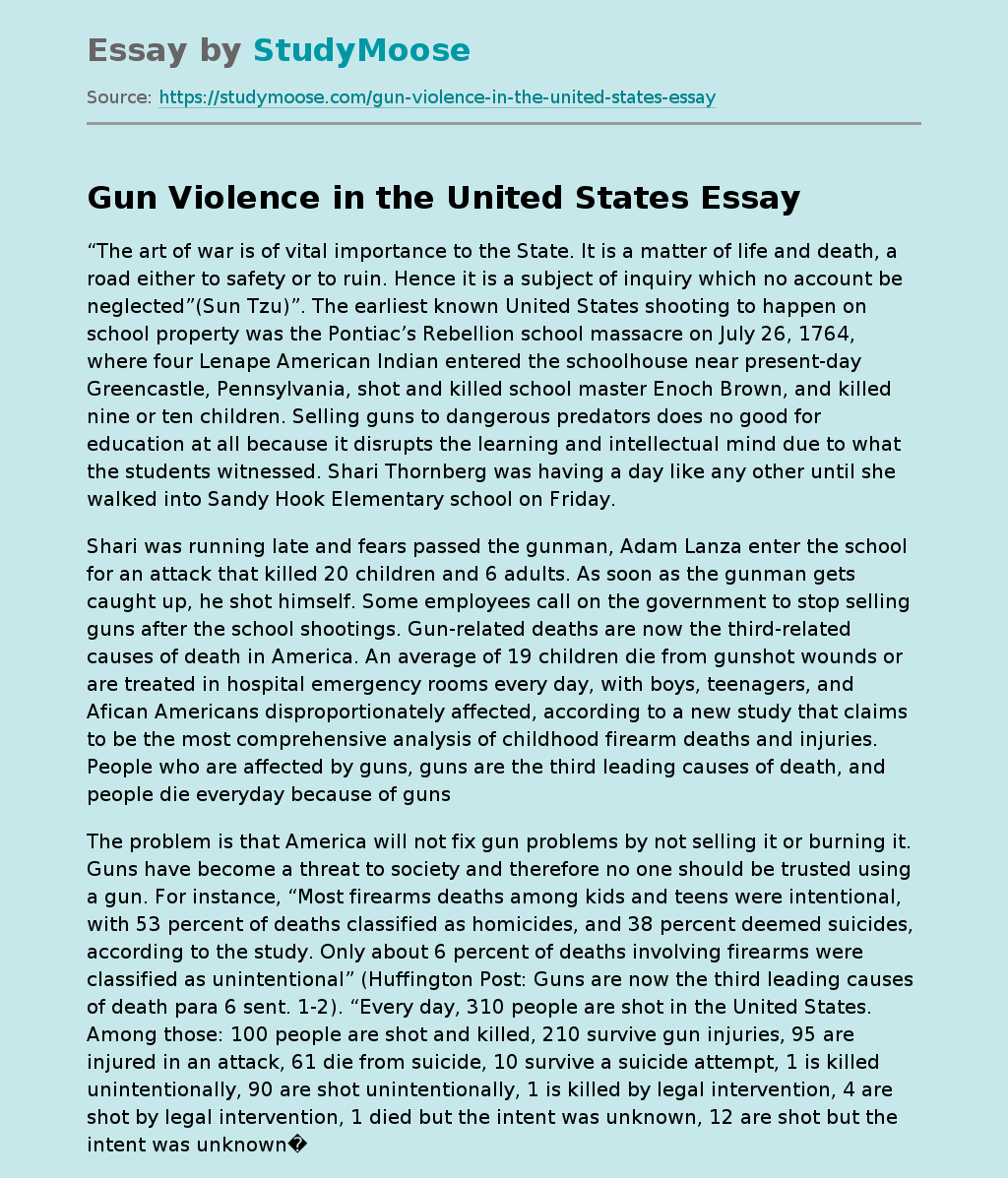