Gun Control in the US

Just a few weeks ago a man with the name Adam Lanza decided to take the guns of his mother and take the life of 20 children and 8 adults, including his mother’s and his own. This atrocity hasn’t been the first one. In the weeks since the massacre, gun control supporters have called for a new federal ban on assault weapons and for reductions in the number of concealed-carry permits issued to private citizens. However, to blame assault weapons for this tragedy makes as much sense as blaming airplanes for the 9-11 attacks.

Don't use plagiarized sources. Get your custom essay on
“ Gun Control in the US ”
Get custom paper
NEW! smart matching with writer

The problem lies with the perpetrator, not the tool used to commit the crime. It is an illusion that further gun control will protect the public since no law, no matter how restrictive, can protect us from people who decide to commit violent crimes. Guns should never be banned in the United States, because the possession of guns ultimately helps improve public safety. Embodied in the Second Amendment to the Constitution is the truth that self-governing individuals should bear the responsibility for defending themselves.

The Amendment states, “A well regulated Militia, being necessary to the security of a free State, the right of the people to keep and bear Arms, shall not be infringed.” If you want to find out more argumentative essay samples check here.

Many heated controversies in regard to the Second Amendment have been generated among legal scholars. The most vigorous debate among all is the correct meaning of the phrase. Some argue that the right of bearing arms only applies collectively to those in the militia.

However, Pratt indicates that many scholars ignore the foundational principles in the Amendment, including the law of self-government and the right of self-defense. His argument is supported by a quote from one founding father, “a primary law of nature, which . . . (is] the immediate gift of the Creator.” Pratt indicates that, self-defense is a God-given right that is unalienable and incapable of being surrendered or transferred. Many pro gun control supporters adhere to the belief that the availability of guns make violent crime happen and, more importantly, that criminal violence in general can be reduced by limiting access to firearms. This is a testable empirical proposition. Research shows that disarming the public has not reduced criminal violence.

For example, in Washington, D.C. and New York City, severe gun control laws had been applied, yet Washington D.C. is the “murder capital of the US” and New York City ranks among the most dangerous places in the country. In both cities, violent criminals can easily obtain the most deadly weapons on the streets within minutes. Legal scholar John Lott presents the most rigorously comprehensive data analysis ever done on crime statistics and right-to-carry laws. Lott had sat the agenda on the impact of guns on crime in America by creating a massive dataset of all 3,054 counties in the United States during 18 years from 1977 through 1994. He proposed a powerful statistical argument that state laws enabling citizens to carry concealed handguns had reduced crime (18).

There are two reasons why concealed handgun laws reduce violent crime. First, they reduce the number of attempted crimes because criminals are uncertain about the possibility of potential victims defending themselves. Second, victims with possession of guns are in a much better position to defend them. Lott also presented the strong negative relationship between the number of law-abiding citizens with permits and the crime rate, which declines as more people obtain permits (59). The ultimate question that concerns everyone is whether allowing law-abiding citizens to own guns will save more lives or not. While there are many anecdotal stories illustrating both good and bad uses of guns, Lott answered this question by illustrating his data analysis and conclude the net effect.

This timely and provocative work comes to the startling conclusion: more guns mean less crime. Possessing guns is one of the major methods for citizens to defense themselves. Some people may use guns in illegal ways, but more have the purpose of preventing horrible things from happening to them. Making guns illegal will primarily disarm peaceful citizens. At the same time, criminals will always find the weapons they need to carry out their crime. This situation leaves a green light for violent criminals to attack everyone, leaving potential victims defenseless. Every day, thousands of peaceful Americans successfully use guns to defend themselves. A study conducted by Florida State University criminologist Gary Kleck found that Americans use guns defensively 2.5 million times a year based on 16 national surveys of samples of the U.S. population. Prior to Kleck’s study, thirteen other surveys indicated a range of between 800,000 to 2.5 million defensive gun uses annually.

Given that there are far more gun-owning crime victims than there are gun-owning criminals and that victimization is spread out over different victims while offending is among a relatively small number of offenders, Kleck arrived at the conclusion that defensive gun uses are substantially more common than criminal gun uses (102). This claim has been repeatedly confirmed, and remains one of the most consistently supported assertions in the guns-violence research area. Through years of research, Kleck has found strong evidence that “crime victims who use guns during a crime are less likely to be injured or killed, and less likely to lose property than crime victims who adopt any other strategy, including non-resistance.” The intent of some advocates of gun control can be misleading.

As the debate over the 1976 District of Columbia gun ban demonstrates, “gun control” often covers for a hidden agenda. British Cabinet papers declassified in 1969-70 demonstrate that contrary to claims made in Parliamentary debates, the intent of the Firearms Act 1920 was not to reduce or prevent crime, but to prevent a feared Bolshevik revolution in Britain. Direct statements by members of the Cabinet demonstrate an intent to mislead the public about their objectives. There are reasons other than the possession of guns that could cause the high frequency of shooting. Being one of them, Cramer’s article, Ethical problems of mass murder coverage in the mass media examines the way in which statistically disproportionate coverage of mass murders by Newsweek and Time from 1984 to 1991 encouraged at least one copycat crime, and may have caused others. Cramer uses a copycat crime Joseph Wesbecker convicted after Patrick Purdy as an example.

Initial coverage of Purdy’s crime was relatively restrained, and only the essential details were reported. But a week later, Patrick Purdy’s name continued to receive press attention, and consequently his fame increased. Articles referencing Purdy or his crime continued to appear in for many months. On September 14, 1989, Joseph Wesbecker, using the exact same weapon as Purdy did, conducted a massacre of his own. After reading about the destructive power of Patrick Purdy’s weapon, Wesbecker clipped out a February Time magazine article on some of Purdy’s exploits, in order to describe the gun to a gun dealer. Fame and infamy are in an ethical sense, opposites. Functionally, they are nearly identical. The human need to celebrate human nobility, and to denounce human depravity, has caused us to devote tremendous attention, both scholarly and popular, to portraying the polar opposites of good and evil.

The pursuit of fame can lead people to acts of great courage and nobility. It can also lead to acts of great savagery. Other than the long-time debates on gun control law itself, it is necessary for the public to think about other issues regarding public safety. In all cases, gun bans have been ineffective, expensive, and even counter-productive. If properly issued, registered, monitored and stored, guns will help defense US citizens’ safety. The fact is that we live in a dangerous world and the government cannot protect us for every single minute. We must ultimately rely upon ourselves and only by having the necessary tools can we make it realizable. Therefore, guns should never be banned in the United States.

Gun Control in the US. (2016, Dec 01). Retrieved from https://studymoose.com/gun-control-in-the-us-essay 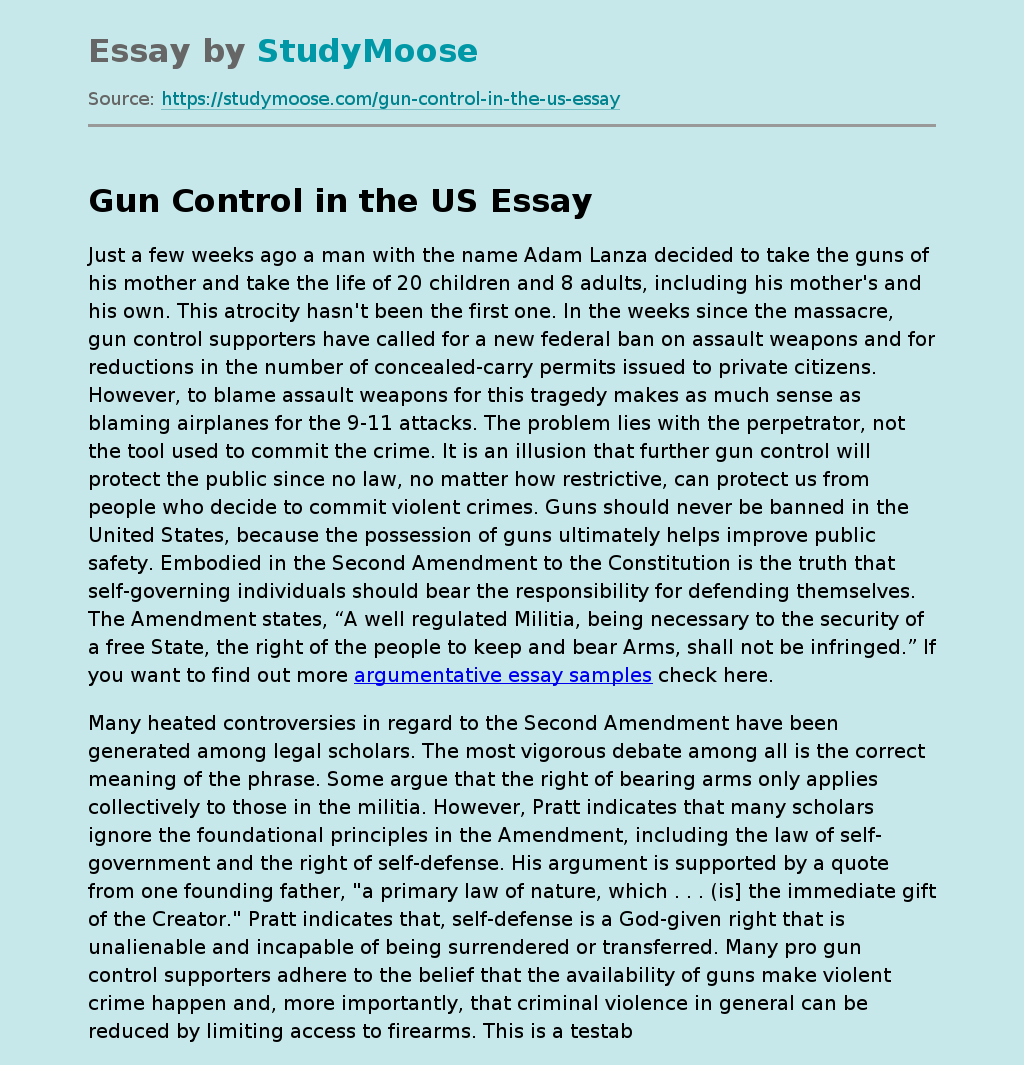