When thinking of an attorney the majority does not give it much thought as to the different types and functionalities this profession takes. That is, until someone is in need of one, or facing one of these professional arguers. One group that find themselves facing an attorney are criminals who have had charges placed against them through the District Attorney’s Office. The District Attorney’s Office is the main prosecuting party in any criminal case whether it comes down to a plea bargain which covers about 95% of all cases or goes to a full court trial.

Don't use plagiarized sources.
Get Your Custom Essay on Guest Speaker Just from $13,9/Page

District Attorney’s, otherwise known as D.A.’s, base much of their decisions by the amount of investigation and evidence that investigators supply them with. Scott Schweibish, who spoke in class, is the Deputy District Attorney for Sacramento County. Mr. Schweibish was a wealth of knowledge on correlating good investigation practices to how well an attorney can prosecute.

D.A. Schweibish began his presentation by describing his workload which consists of prosecuting general felonies.

These felonies range from drugs, DUI, home invasion, attempted murders, etc. Before becoming a D.A. for Sacramento County he worked for Orange County as a District Attorney. The D.A. has spent his entire career working closely with different law enforcement agencies, as well as numerous police officers. He has worked with special investigation projects, federal agencies, special task forces involved with narcotics, white collar crime, and the U.S Attorney.

Being an attorney where the main focus is to prosecute a criminal Mr. Schweibish stressed that it is crucial to receive an investigation report that is the most accurate down to the smallest detail. Any aspect of the investigation that is overlooked or mistakenly not written in the officers’ report can open a whole for the defenses side to prove the defendant is innocent or have the case dismissed all together. The defense attorney will scrutinize every detail of a report for accuracy and if they find anything they can make a defense out of they will, as Scott said, “tear you up” when you testify. The defense will still question every detail on the report and ask why certain things were not done, but if the report is done correctly then the office will be able to defend his actions and investigation. He went on to state that when officers do a proper investigation and complete a thorough report then the defense will not have a leg to stand on and in most cases the defendant will agree to a plea bargain and the case will be resolved without having to go to trial.

Another point that was stressed was every case matters and that all investigations matter. Every time a crime is committed no matter how small or how in the bag it may seem the investigation is crucial. Mr. Schweibish stated that 95% of the time a good investigation matters. He described that as an investigator it is important to remain open minded, logical, and objective as a majority of the time what you think is the whole crime might be just one part of the crime.

Deputy District Attorney Scott Schweibish who works for Sacramento County was a great asset to have speak for the class. He strongly enforced the importance of a thorough report and the consequences if you slack on details. 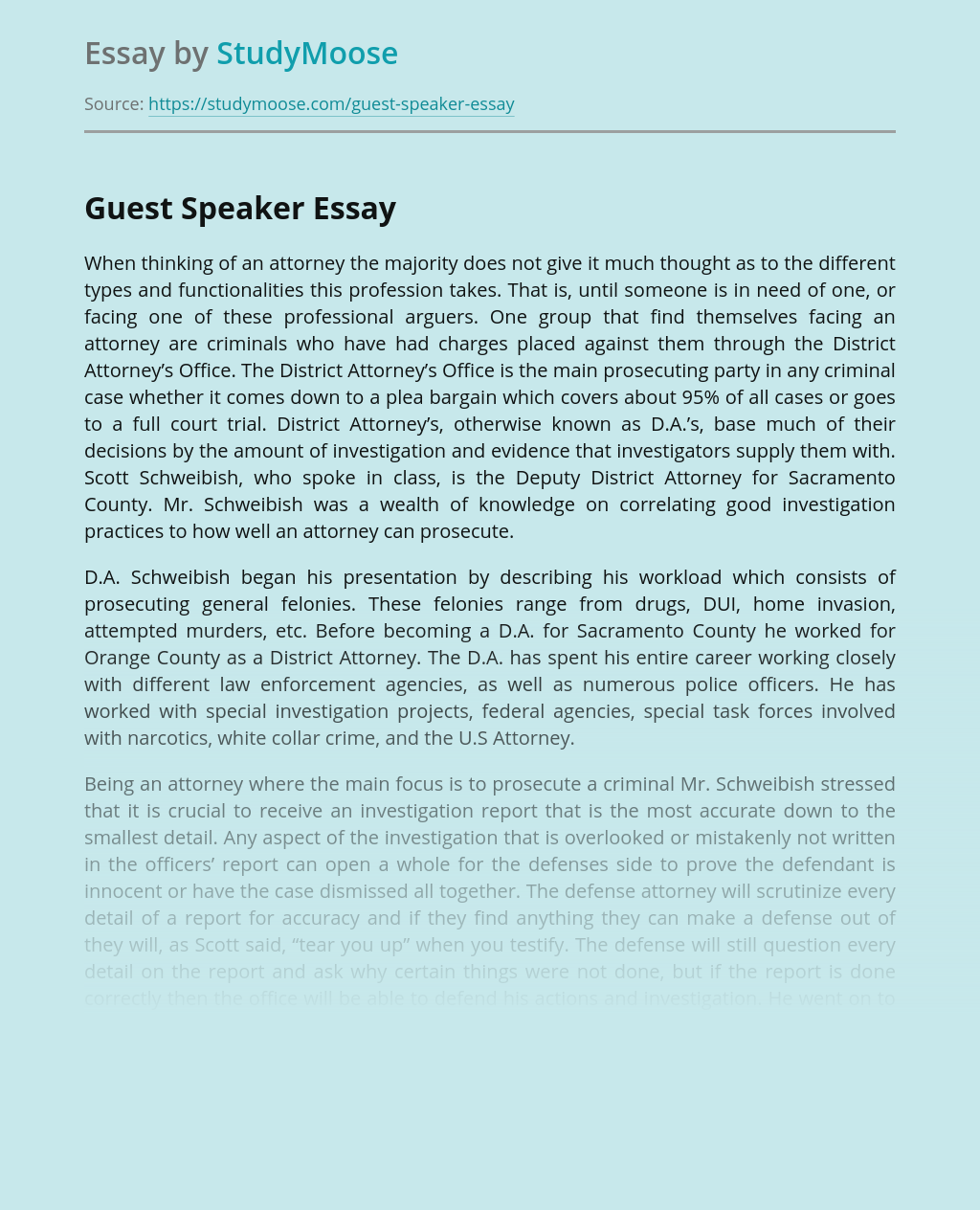 Snatch theft is becoming a serious issue nowadays. During the months of June and July 2004, the local media, especially the press, have been replete with reports of crime and violence in Malaysia. There have been many reports of snatch thefts which has given a great impact to the society. Police statistics on these crimes... VIEW ESSAY

Wrongfully Accused Anyone who has been wrongfully accused of doing something they know they did not do will understand the immense frustration that comes with it. Fortunately for most people, that boils down to someone saying they took the last donut or let slip a bit of gas. Unfortunately for others, it involves horrible crimes... VIEW ESSAY

In the last scene of the movie Criminal activities and Misdemeanors, I believe the imaginary philosopher Louse Levy’s message was extremely similar to philosophy Jean-Paul Sartre and his theory on existentialism. Among Sartre’s quotes, “Man is absolutely nothing else but that which he makes from himself.” Levy is attempting to convey that we are in... VIEW ESSAY

Should be Abolished from our Judicial System Fagan, Jeffrey A. Capital Punishment: Deterrent Effects & Capital Costs. www. law. columbia. edu/law-school/communications/reports. Summer 2006. Web. 06 April 2011. The article shows that the states are broken, and the money that we are spending on trials to punish criminals to death penalty should be used in prevention.... VIEW ESSAY

“Shutter Island” is a movie that is not only dedicated to delivering flawless scenery and a storyline about a mental institution locked away with a deep, dark secret away from civilization, but instead, the majority of the film is actually a character study with Teddy Daniels as the main subject. Teddy Daniels has a troubled... VIEW ESSAY