1. Ford developed a new model, later to be known as the pinto, changing the design drastically. 2. Ford discovered that the fuel tanks position was in a ‘vulnerable place’ and the car failed to met crash safety standards. 3. Ford was aware of the small cost to help the fuel tanks meet standards but refused to use them due to the slight delay in production that might occur and approved production of the prototype. 4. A 1972 Ford Pinto was involved in a rear ending when it unexpectedly stalled causing the care (presumably the fuel tank) to burst into flames.

5. A Mrs. Lilly Gray was died as result and her son 13 year-old Richard suffered severe and permanently disfiguring burns to his face and entire body.

1. Did Ford exhibit “malice” which is necessary to establish in order to award punitive damages? (Yes) 2.

The punitive damages awarded are too high for current Californian law, is this unlawful? (No)

1. Malice has been also interpreted to mean “a conscious disregard of the probability that the actor’s conduct will result injury to others.” 2. Although higher than monetary penalties under government regulations, the punitive damages are to prevent firms in the future from disregarding safety and possible negative consequences.

1. The primary reason for having and awarding punitive damages is to “punish and deter the conduct by wrongdoers and others.

Your Response: I completely agree with the decision.

1. Punitive damages were awarded due to the fact that Ford was found to have acted with malice in regards to their production of the Pinto. It has been also interpreted to mean ‘a conscious disregard of the probability that the actor’s conduct will result injury to others.” And this is exactly what Ford did when they disregarded the fuel tank findings and refused to add the safety precautions to the fuel tank. Although higher than monetary penalties under government regulation, the punitive damages were high in order to set an example so that firms in the future would be deterred from disregarding safety and possible negative consequences when producing their products.

2. Although the cost is higher than the saving in the short run I believe it would be to Ford’s benefit to take on the cost of adding the additional safety measures due to the fact that in the long run with more and more deaths attributed to what could be called the ‘greedy, callous’ nature of Ford, sales could decrease. By absorbing the $137.5 million and allowing the public to know of Ford’s action (due to our concern over their safety) could possibly generate a good amount of future sales. On the other hand should the public discover that deaths could have been prevented public trust in the company could decline causing Ford’s sales to suffer the same fate.

3. First the actual cause of Holmes accident should be verified, if it was indeed due to the tires, then yes he should be allowed to appeal for a trial. 4. First of all, even though they bare the heaviest blame (in my opinion) they weren’t the only ones responsible for the advancement of the Pinto’s design. Putting them in jail would just make way for Ford to replace them with others who could potentially make the same decision. It would also be sending the message to other firm’s officers to make sure that they aren’t the ones holding the bag at the end of the day.

This only put a few in the industry on guard. Having the entire company pay punitive damages causes the entire industry to be on guard and makes all within the company liable. On the other hand, having to pay such exorbitant amounts could potentially cause a company to go out of business or cause them to downsize (fire employees to save money) effecting all that work there, whether or not they were involved in the design and decision making process. (I.e. they could fire janitors that work at their offices.) 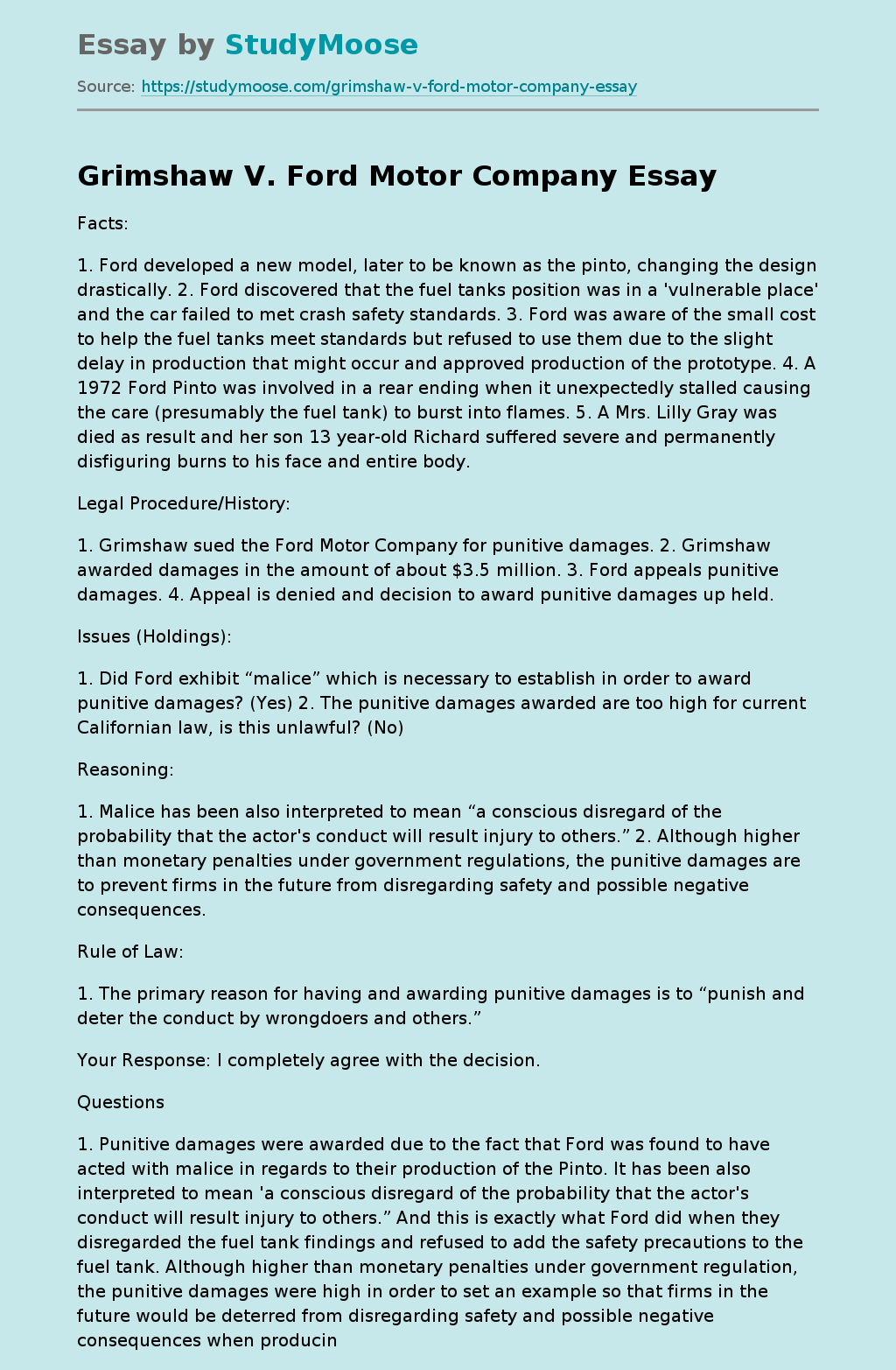