We often talk about the dark side of environment — the rising pollution levels in our cities, the increasing toxins in the atmosphere, the destruction of forests and wildlife. The depressing list is endless. But in this feature we take a look at some good news… a look at some of the greenest cities in India. Find out if you live in one CHANDIGARH Arshi Shaila Sales Manager

This is one city that can be a leading example when it comes to being environmental friendly (and a lot of other things as well, actually) and it very appropriately is known as the Green City of India.

Don't use plagiarized sources. Get your custom essay on
“ Green cities of India ”
Get custom paper
NEW! smart matching with writer

Most of Chandigarh is covered by dense Banyan and Eucalyptus plantations. Asoka, Cassia, Mulberry and other trees flourish in the forested ecosystem. The city has forests surrounding it which sustain many animal and plant species. Deers, Sambars, Barking Deers, Parrots, Woodpeckers and Peacocks inhabit the protected forests. Sukhna Lake hosts a variety of ducks and geese, and attracts migratory birds from parts of Siberia and Japan in the winter season.

NAGPUR This largest city of central India, famous for its oranges, is considered to be the second greenest city in the country. Blessed with rich forest resources, Nagpur is noted for its rich forest resources, lush vegetation and greenery. The forests around Nagpur are full of best quality teak plantations.

JAMSHEDPUR The steel city is a model of harmonius co-existence of industry and environment, with acres of verdant parks and gardens dotting the city and has been labeled a “green city” quite rightly so.

Jamshedpur is surrounded by the beautiful Dalma Hills. Nestled at the foot of the hills is the vast Dimna Lake, about 11 km from the city. The scenic beauty is enchanting. The hills in the distance, the clear blue rippling waters and the greenery make Dimna Lake an ideal retreat.

GANDHINAGAR The capital of Gujarat is clearly one of the greenest cities in the country. With 32 lakh trees for a 1. 5 lakh population, Gujarat’s capital has an enviable 22 trees per person and 425 trees per hectare.

The city also boasts of being the greenest capital in the world.

DELHI The Green Delhi Action Plan of the Delhi Government undertaken in 2004-05, called for planting saplings that could specifically combat air pollution besides emphasising the need to check noise pollution and suspended particulate matters in the atmosphere. Besides neem, amaltus, pipal, pilkhan and maulsiri, the Action Plan favoured plantation of trees like arjun, gular, jamun and semul, for checking noise pollution and SPM.

BHOPAL When you think Bhopal, perhaps the first thoughts that come to your mind are of the Unioin Carbide toxic gas leak, the thousand of people who died that night and the lakhs who have suffered from it. Bhopal also boasts of a Van Vihar, which was declared a National Park in 1983. It covers an areas of 445. 21 ha. Once a barren area, it has now been transformed in to an oasis of greenery. This is a unique zoo of the country, as the animals are kept here in near natural conditions.

THIRUVANANTHAPURAM This captial city of Kerala, was called the “Evergreen city” by Mahatma Gandhi.

Read about positive effects of the green revolution

The wooded highlands on the Western Ghats in the eastern and northeastern borders give Thiruvananthapuram an emerald look. Thiruvananthapuram is famous worldwide for its beaches, historic monuments and backwater stretches. It is also a major tourist designation for its natural beauty and serene greenery.

BANGALORE Last but not the least, we take a look at the original “garden city. Once famous for its lush greenery and foliage, Bangalore has witnessed rampant loss of its tree cover in the name of development.

But Bangloreans are waking up to the plight of their city. A silent “green revolution” is in the making in India’s tech hub as citizens come together to sponsor trees to save the city’s “green heritage”. The unique programme christened “I Own a Tree”, started by Bangalore-based environment group Eco Club, allows a person to sponsor and own a tree for two years. So far 300 Bangaloreans and a few corporate houses have come together to plant around 4,000 trees in various parts of the city. 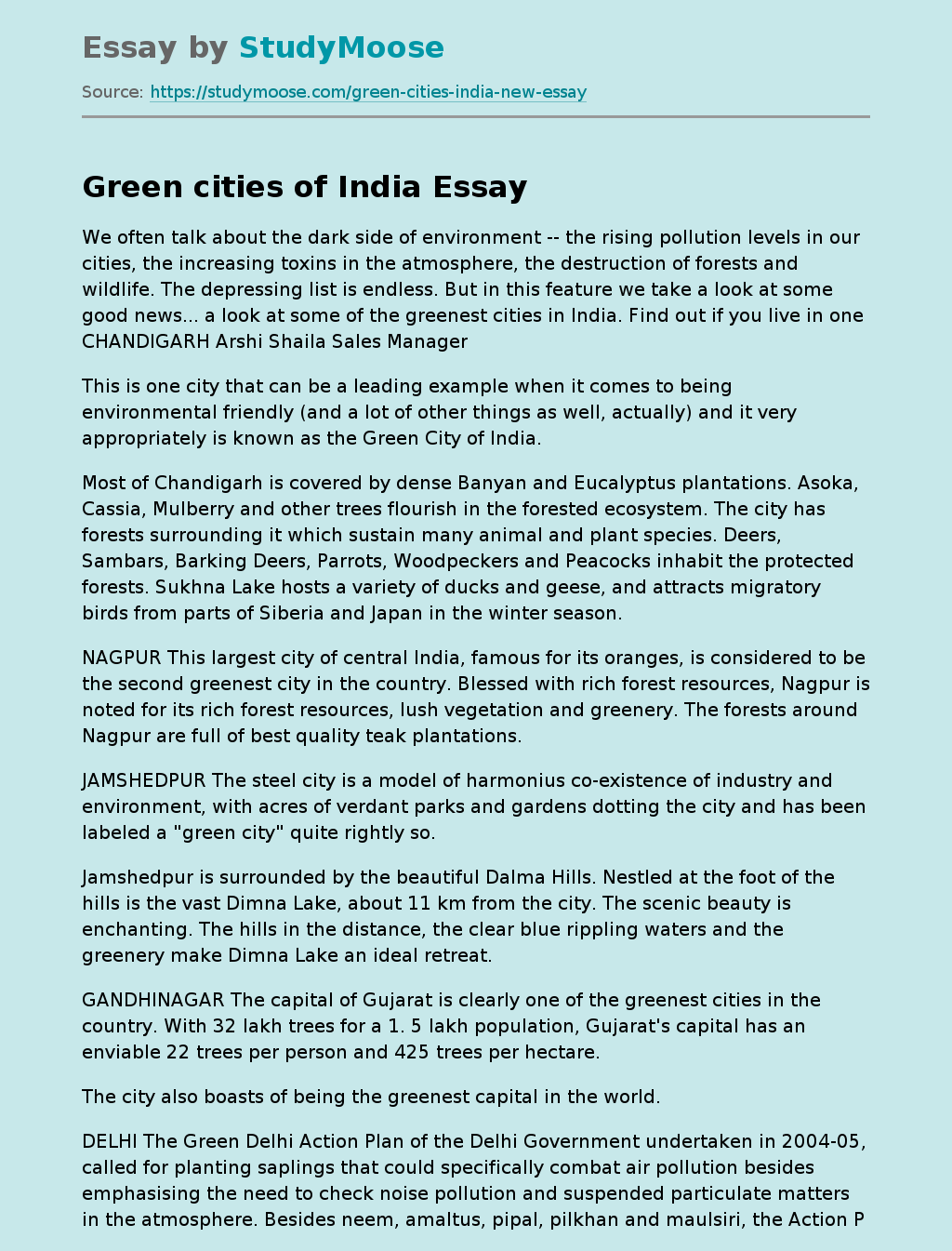