Apparently, then, injustice has the power, first, to make whatever it arises in – whether it is a city, a family, an army, or anything else – incapable of achieving anything as a unit because of the civil wars and differences it creates, and second, it makes that unit an enemy to itself and to what is in every way its opposite, namely, justice. (28) Republic, Plato Since the beginnings of civilization, the concept of Justice has been debated and argued, defined and redefined, molded and reshaped time and again.

Don't use plagiarized sources. Get your custom essay on
“ Greek Justice ”
Get custom paper
NEW! smart matching with writer

Wars and civil movements have begun because of conflicting definitions surrounding it. Countless governments have been planned and molded around each society’s own interpretation of what it entails. It is altogether necessary for a functioning body of people in any situation. Given the enormous weight and import of justice, one might think a single, generalized explanation of the term would simplify virtually every aspect of modern life. But, as is the case with most integral human issues, the number of variations on justice is nearly equal to the amount of those who prescribe to its doctrine.

Even in the reading of Pericles’ Funeral Speech and Sophocles’ Oedipus and Antigone (three texts by two authors from the same time and culture), three separate views on justice are communicated. Webb 2 Of the three, Funeral Speech and Antigone share the most similarities in their approach to the issue. The base of the issue (the simple form of the word) is where a majority of the unity lies.

In both texts, justice is looked upon as a verb, an action; a very tangible illustration of the term. Certain works of the various subjects or characters embody what is just and right.

Lofty notions and vague ideas are pushed aside in favor of solid, concrete deeds and accomplishments. It is when the authors begin to separate just actions from the ordinary or unjust that a rift appears between the two viewpoints. In Pericles’ Funeral Speech, conduct of the just is everything purely patriotic. He calls upon the people of Athens to be one minded in their pursuit of ultimate citizenship and a perfect state. Since the circumstances under which he is delivering the speech (a eulogy for hundreds of killed Athenian soldiers) are less than auspicious, Pericles fronts the address with a thick glaze of shameless nationalism.

He tells the citizens of the characteristics that separate Athens from other countries. For example, each Athenian, regardless of his social standing, has equal say in social issues as long as he remains useful, “Nor … does property bar the way, if a man is able to serve the state. ” (28) On the other hand, one who does not participate to a satisfactory level is viewed “… not as unambitious, but as useless. ” (29, emphasis added) Furthermore, an Athenian citizen, in his quest for justice, should be not only willing but happy to die for his country.

(31) Even the most intimate aspects of humanity are to be offered up in patriotic sacrifice. In order to recoup the losses caused by the Battle of Marathon, Pericles calls on the citizens to “replace” their fallen offspring in order to provide the state “… a reinforcement and a security. ” (31) Not all of this service is pro bono, however; Pericles closes his statement Webb 3 by promising the Athenians reimbursement, since “… where the rewards for merit are greatest, there are found the best citizens. ” (33)

While Sophocles’ story of Oedipus is, like Funeral Speech, centered around community benefit through actions, the surrounding circumstances are slightly different. Thebes has been laid upon by a devastating plague and Oedipus is called to save the city; to do whatever it takes to free them from their malady. When it is found that Oedipus will be required to seek out and kill an assassin to cleanse the city of its ungodly pollution, he agrees. But the motives surrounding this forthcoming deed are deceptively far from patriotism.

As an elder tells Oedipus, “You brought us lucky signs and good days; now you need to do the same for us again. ” (03) Oedipus’ own motives are further still from the condition of his country, or even his subjects. He acts out of fear that the assassin “… could kill again and lay those deadly hands on me. ” (06) Thus, the interpretation of justice and right deeds takes on a more individualistic, self centered and comfort-focused view. This further diversifies the definition, turning justice into whatever is best for each person at a specific time.

Also in Sophocles’ illustration of justice, a layer behind Self lie the gods and a somewhat Karmic outlook of right living. Each action committed by a Theban is under close scrutiny by the gods and, more often than not, the pleased/offended god will send a reaction. Even so, this respect for the gods is not usually an act of worship. Rather, it is simply a method of maintaining one’s own good fortune. One very explicit example of “karmic” injustice in Oedipus is Hubris. Defined as “exaggerated pride or self confidence” (Merriam-Webster), it downplays the Webb 4 gods’ role in controlling fate.

This greatly angers the deities the Thebans fear and very often leads to punishment. Their society greatly fears this retribution, as demonstrated by a citizen’s preventatory prayer: “If a man moves in lofty pride his hands or tongue, fearless of injustice … I pray he will meet an evil fate to pay for his miserable excesses. ” (37) This show of fate is graphically played out at the conclusion of the story as Oedipus, in his prideful need to know and control all, commits the injustice of hubris.

This leads to his wife’s suicide as well as his own self-inflicted blindness and exile. Unlike the previous two readings, Sophocles’ Antigone portrays Justice as a proper noun, an entity independent from the actions or preferences of humans. On numerous occasions throughout the text, Antigone directly refers to this fate-like facet of Justice, calling on it by name. For example, when her sister, Ismene, attempts to share credit in the burial of their brother, Antigone replies, “Justice will not allow this since you did not want to do it, nor did I give you a share in it.

” (42) This new, higher plane of justice moves above human interpretation and manipulation, almost to an absolute level. The main conflict of the play illustrates this absolutism very well. After burying her brother against the decree of Thebes’ king (Kreon), Antigone is sentenced to death. She maintains that burial is a right guaranteed to everyone by the gods. Thus, she was just in her actions; as she says to Kreon, “… [Nor] do I think your proclamations had such strength that, mortal as you are, you could outrun those laws that are the gods’, unwritten and unshakable.

” (38) The karmic aspect of justice portrayed in Oedipus is also taken a step further throughout Antigone. Not only will justice affect one’s mortal life, but it Webb 5 reaches far beyond our physicality. As her death looms nearer, Antigone comforts herself by remembering that by doing the will on the gods on earth, she will have a better afterlife. In a brief monologue before her sentencing, Antigone reveals, “… I still nurse the hope that when I get [to Hades], I shall come dear … to my own sweet brother.

” Once again, after tempering with the gods’ irrefutable version of justice (thereby committing the injustice of hubris), Kreon is punished through the suicide of his entire family. Today, what we refer to as justice more closely resembles the models of Pericles and Plato, although it is becoming increasingly individualistic (as it was in Oedipus). While we have a centralized government doling out very simplified justice (in the form of punishment for infractions), the more obscure and abstract forms of personal justice are very much up to personal interpretation.

Furthermore, there are hundreds of other existing cultures besides us, each with a (sometimes) completely different form of justice. In our world of misunderstanding, the best thing we can do is to take Plato’s example; always continue communication and debate. 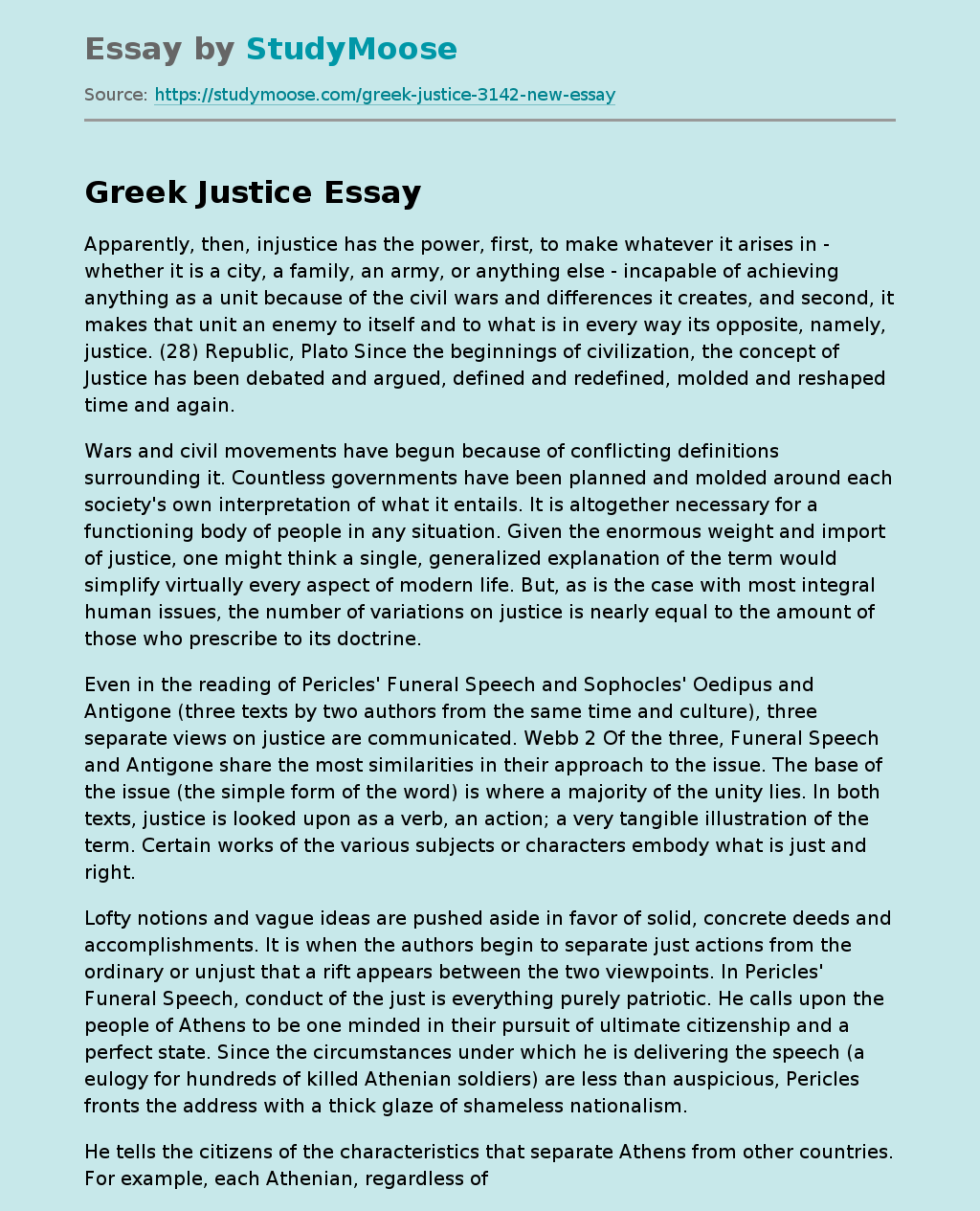