This paper discusses the high salaries paid to professional athletes and the effect on the price of game tickets.

Greed in Sports Recently Michael Jordan wanted to de-certify the union of the National Basketball Association, because he felt he could never make what he was “worth” under the current agreement. Michael Jordan had an estimated income of $33 million in 1994. Last year, Major League Baseball players went on strike because they felt the deal that the owners were proposing was unfair. The minimum salary for a major league player is 9,000.

Don't use plagiarized sources. Get your custom essay on
“ Greed in Sports ”
Get custom paper
NEW! smart matching with writer

For the first time in ninety years, there was no post-season baseball, and no world series. Eric Turner was designated as the Cleveland Browns franchise player. He then proceeded to hold out during spring training, because he knew he could get more money then his current $2.15 million dollar contract. At one point in every athletes life, there is nothing they would want to do more than play their sport, not because it fattens their wallet, but because they have a true love for it.

At what point does the athlete lose the love and gain the greed? The NBA has become the land of the guaranteed contract. These players want their millions handed to them on a silver platter, no matter what happens. If they get injured and can no longer play; pay up! If they averaged thirty points a game in college, but struggle to make the transition into the pros, and average only four points; pay up! If their egos swell so much that they are out of control in public and do something to disgrace the organization they play for; pay up, because the contract guarantees that they get their money.

The NFL is a breeding ground for holdout players. I think that Holdout 101, taught by Professor X-Pro Millionaire, is a required class for all pro football players. Rule number one: if you think you can get more money than what your contract says, holdout. Rule number two: if you are in the middle of a multi-year contract, then fuck that contract. Remember, if rule one applies, who gives a shit about a commitment. A new trend in baseball started about ten years ago. Players now sign one year contracts, and play for a different team each year. They don’t ask themselves if that team will be a contender, or if that’s the team they truly want to be a part of. They look at all the offers put in front of them, and see which one has the most dollars signs in it. It has gotten to the point where if someone asks “who did he used to play for?” they correct answer is six or seven different teams, depending on how long he’s been playing. Professional athletes always say that there is nothing they would want to do more than play their sport. One year later they contradict themselves by refusing to play due to a salary dispute. I think this greed begins as soon as the athlete realizes that he can play at the professional level. When they realize they can make a ton of money by doing what they have always been good at, they start concentrating on the money to be made instead of concentrating on playing a game. The same person who played little league, then for his high school team, while never making a dollar for doing it, but still enjoying it all the same, suddenly develops a greed that is unimaginable. Not only do they want to get paid, but they want to get paid more than anyone has a right to for playing a game. Sports will always be the owners business, the players job, and the fans game. I think the owners and players often forget this, but the fans are the ones who pay for it. The players see others players making millions, and wont play unless they also make a ridiculous amount. The owners are willing to do whatever it takes to get the players signed, so they pay them millions and raise the prices on the fans. It has gotten to the point where if you want to take your family to a sporting event, and possibly buy some food while your there, you better take out a small loan from the bank before you go. Every year the prices for tickets, food, parking and souvenirs increase at the same rate as the greed of the players, and the owners willingness to pay. The solution for all of this madness is a salary cap. Baseball and basketball due have salary caps now, but $35 million divided by twelve players is hardly a cap. In all sports they should have a maximum of $100,00 for rookies and $1 million for everyone else. Athletes do entertain millions of people, so I think they should be paid well. No athlete would ever agree to this because of the amount they all make today. An annual salary between $100,000 and $1 million is a hell of a lot of money. Even if the athlete decides to stay in college and get his degree, what else can you do to make $100,000 your first year after graduation. And what can you do to make a million dollars? The truly great ones would still make money from endorsements, but they average fan would be able to go to games without going broke. 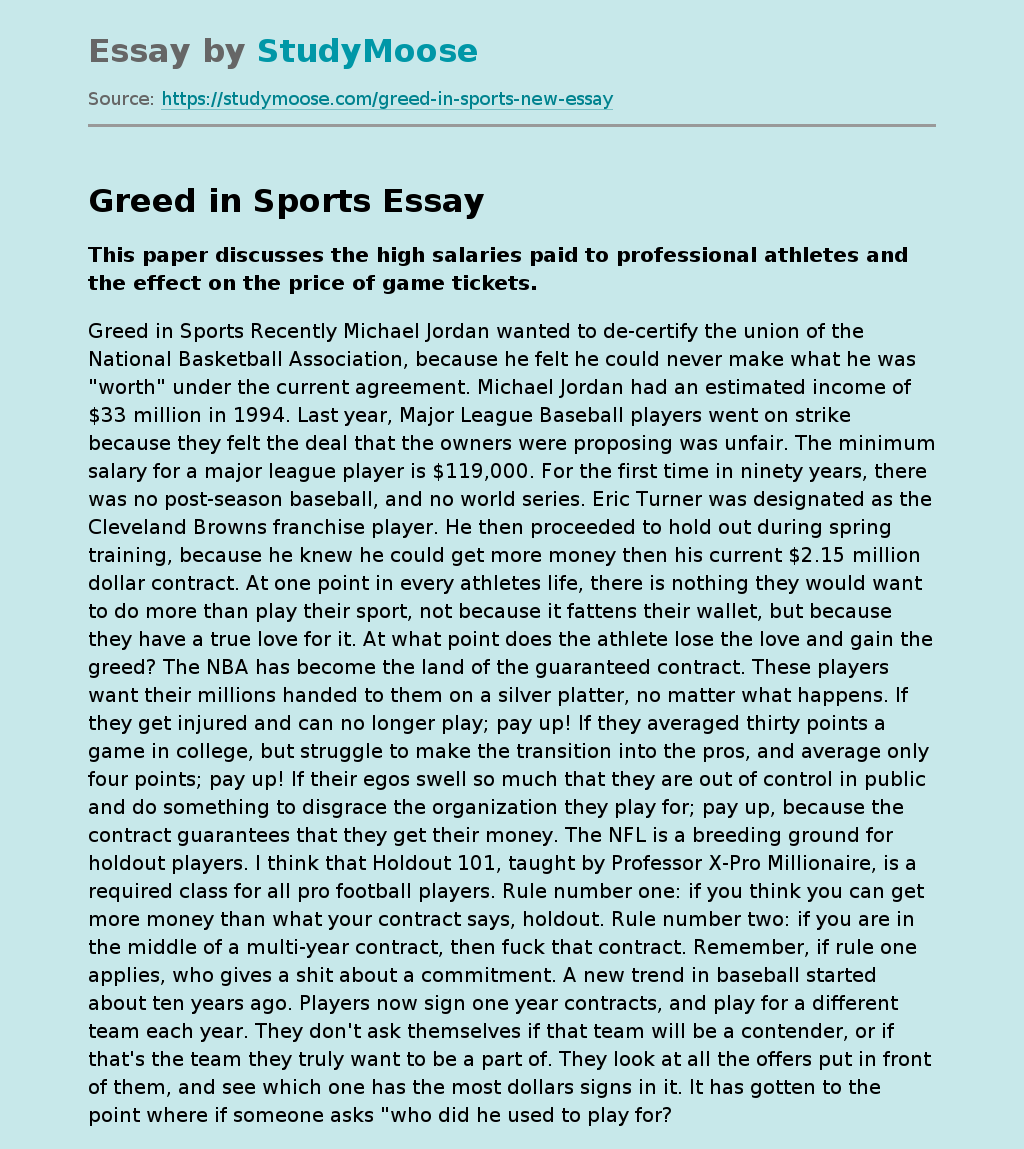