The Great Gatsby by F. Scott Fitzgerald is an iconic novel of American literature. It is seen as a definitive novel that highlights aspects of life and thinking in 1920’s America. Due to its cultural significance and popularity, numerous attempts have been made to translate The Great Gatsby from novel to film. The most notable presence of the film portrayed on screen, was the 1974 film, The Great Gatsby. The film starred big name celebrities such as Robert Redford as Gatsby, Mia Farrow as Daisy, and Sam Waterston as Nick.

Don't use plagiarized sources. Get your custom essay on
“ Great Gatsby Novel vs Film ”
Get custom paper
NEW! smart matching with writer

The movie also featured a script written by Francis Ford Coppola. While overall being considered a good film which stayed true to the novel, many thought it lacked heart and emotion. While Baz Luhrmann’s The Great Gatsby is the fifth time, the novel has been filmed, it is only the second time a film adaptation of the novel will see a widespread general release. The Great Gatsby (2013) comes from Australian director Baz Luhrmann, and stars Leonardo DiCaprio as Gatsby and Tobey Maguire as Nick Carraway.

The film like the book, is told through the narration of Nick Carraway.

Carraway lives next to the mysterious Gatsby who has numerous large and extravagant parties. Gatsby is rarely seen by the public, and it is unknown to people how Gatsby became wealthy. The film follows Nick’s interactions with Gatsby and most notably the relationships between Gatsby, and the girl he loves Daisy Buchanan, as well as Daisy’s husband Tom. Much of the tension in the film stems from the class differences between New Money, and Old Money.

People who belong to the class of Old Money are generally old aristocratic families, specifically highlighted by Tom and Daisy Buchanan.

People who belong to the class of New Money are people who have recently acquired there fortune through various entrepreneurial ventures and jobs such as stock brokers. The main characters in the film who are part of New Money are Gatsby and Nick. The film is set against the backdrop of the wealthy society during the roaring twenties in and around New York and Long Island. Baz Luhrmann’s The Great Gatsby tries to express the same themes as are found in the book. One of the main themes is the differences in the various classes in the United States.

Gatsby has a very different outlook on life compared to that of Tom Buchanan. Gatsby is considered new money meaning his fortune is recent and self-made, while Tom is from old money, where legacy and familiarity with the wealthy lifestyle are more apparent. Tom tends to believe in class and education and finds Gatsby essentially a crude bootlegger. Gatsby while not having the sophistication or education of Tom believes he can win over Daisy’s heart with extravagant parties and money. The film also demonstrates the apparent dismissal of the new money as equals.

Tom is seen as a bully and someone with less morals than that of Gatsby, highlighted through Tom’s affair with another woman. The film also highlights the recklessness of the 1920’s. The 1920’s are shown as a period where money was plentiful and people were not afraid to spend it. People were frequently spending money they did not have on things they did not need. Gatsby is shown to be a very flashy person with a pink suit and expensive cars. Historically speaking it is now known compared to when the book was written the consequences of the recklessness. (i. e. the great depression)

It is clear that the main relationship that Luhrmann wanted to emphasize was the relationship between Gatsby and Nick. Throughout the course of the film there are various differences from the novel that highlight the emotional relationship that Gatsby and Nick share with one another. For example the film has Nick telling the story to a doctor at a centre for rehabilitation, while the novel does not specify who Nick is narrating the story too. Nick is apparently here for Alcoholism which demonstrates that his experiences with Gatsby and ultimately Gatsby’s death took a more traumatic toll on Nick’s life.

The special relationship that Luhrmann creates for Gatsby and Nick may be suggesting that Nick is in fact in love with Gatsby. Being directed by Baz Luhrmann, anyone familiar with his previous work will know what to expect from The Great Gatsby. People who enjoyed the general story of the book will enjoy this particular film version, but as for getting a point across or inciting emotion the film tends to be very shallow. While Luhrmann likes to create a visual spectacle, one can only be distracted by pretty colours and lights for so long.

The actors in the film, while all good, are clearly not the directors primary focus. Luhrmann is able to bring the spectacular parties and beautiful landscapes to life, he is not able to really create distinct relationships between the characters and actors of the film. The two most standout performances are that of Tobey Maguire and Leonardo DiCaprio, the relationship between Gatsby and Carraway is by far the most interesting part of the film. Carraway’s obsession and defence of Gatsby may lead one to believe that he wants to be more than just friends with Gatsby. 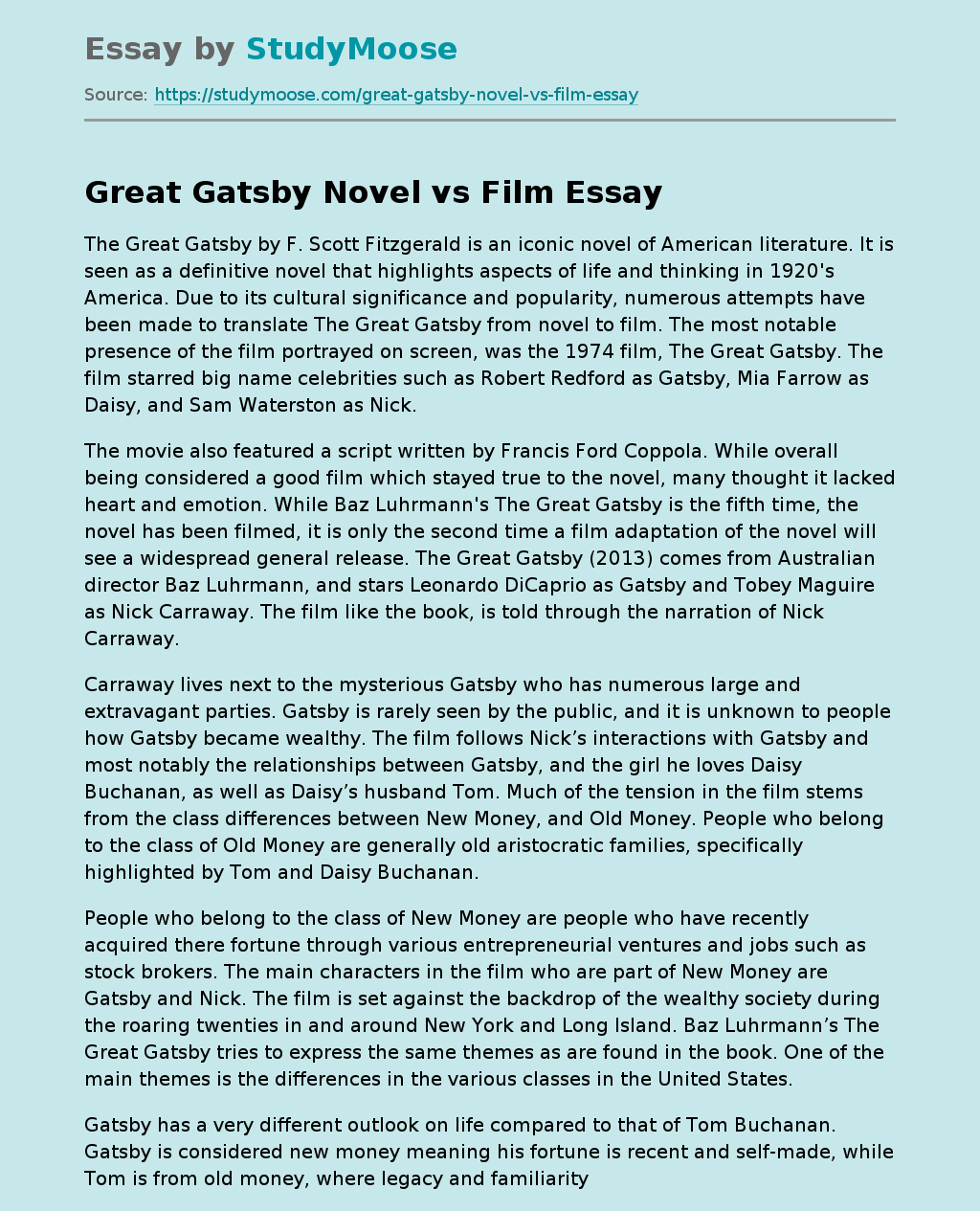