The Great Gatsby: How does Fitzgerald tell the story in Chapter 1?

Chapter 1 is successful in portraying that there is a ‘first person narrator’ who is a participant and an observer in the novel. The narrator serves to give an insight into the story, and therefore ultimately, we create our own opinion of him. Through the grammatically-complex sentences in the first page such as “when I came back from east last autumn…”, we establish the idea that he is giving an account retrospectively, therefore highlighting that the narrator is perhaps unreliable. This is effectively portrayed as Nick perhaps followed his fathers advice of “reserving all judgements”, because he’s had “advantages” other people haven’t had.

Don't use plagiarized sources. Get your custom essay on
“ The Great Gatsby: How does Fitzgerald tell the story in Chapter 1? ”
Get custom paper
NEW! smart matching with writer

Perhaps this advantage is in the form of cognitively thinking he is better than “normal people”, therefore highlighting that his retrospective account may be flawed.

The idea that this is a 20th century novel reflects on the form of this novel being a ‘novel about writing a novel’. Writing in one style can’t reflect Fitzgerald creative ability, so he uses Romanticism to express his literary creativity.

The idea that Romanticism was choosing feeling over reason and choosing beauty and art over technology is challenged. He uses technological imagery to evoke Romantic perceptions and perspectives when describing Gatsby such as Nick thinking is he “related to one of those intricate machines that register earthquakes”. He combines the Romantic word ‘gorgeous’ with the idea of technology to effectively portray to us that he is a creative writer. This helps aid the ‘love’ story. Nick is highly ambivalent towards Gatsby as he shows he has “an unaffected scorn” for him.

This ambivalence frustrates us but makes the reader want to read on, as we discover later in the novel how this ambivalence is merely destructive (Nick implicitly knowing that Daisy killed Myrtle, yet he doesn’t say anything).

The use of the ‘scenic’ method in which vivid descriptions are given to dramatise the narrative is merely effective. This means that Fitzgerald is merely ‘showing’ the reader, a lot of scenes rather than the omniscient narrator, Nick, telling us. An example could be in the descriptions of body language, such as “cruel body” and “spanking new”. Also, vivid descriptions such as “the broken fragments of the last five minutes at the table” decelerates time to create more tension and conflict, and allow us to realise the difficulty the characters have in connecting with each other (e.g. Daisy having to put up with Tom having another ‘woman’). This prolepsis is perhaps frustrating for some, but personally it is giving us a vague destination to the novel: corruption.

Another aspect of narrative which is conveys an important concept in this chapter is characterisation via setting. The eggs may symbolise a ‘promise to a new life’, even though they are sterile rocks. However, on a deeper level, Fitszgerald cleverly portrays the sense that Women are corruptive the East-egg exterior is merely a faï¿½ade which hides corruption from within. This is through the use of artificial and natural light; at the start of the chapter, the French windows “glow” with light (of the sun) and show the luxury of the house.

They also “eat on a rosy-coloured porch” with the natural light outshining the candles that had been lit on the table, however, when the telephone rings (which is from Myrtle), the glamour contained within the house is destroyed. This is conveyed through the use of “no light” on Daisy on a different porch, and therefore Nick’s opinion of her changes and criticises her for her “basic insincerity”. Also inside, the “crimson room bloomed” with lamp light, which shows that Nick’s romantic illusion has been shattered. Though complicated, Fitzgerald successfully shows how Women are corruptive in the east-egg through the symbolic use of light. This perhaps leaves us with a sign of destination, as this is proleptic of decay further on in the novel (myrtle causing decay)

Nick’s continuous use of ‘And’ at the beginning of sentences is representative of his incessant narrative of the world around him. It seems that Nick is comparing himself to the whole world and therefore needs to absorb and relate everything around him to be able to explore it himself. Although his descriptions are often dry and factual which suggests although Nick may be wanting to better himself and become the ‘all-rounded man’, he is not as successful in his observational skills as he may think. Once again suggesting a contrived view that he has on himself.

Nick’s conscious feelings towards his father’s advice is also portrayed in this chapter. This is displayed when Nick describes Tom as ‘gruff’ and speaks of people who ‘hated his guts’. This would seem fine; however Tom has also had many advantages with-in the past and therefore the reader would expect Nick to be able to relate to Tom. However this divide could be due to Nick’s own dislike for his father’s views. On the other hand it could be interpreted as an indication of the divide between new and old (or actual and contrived) money. Therefore Nick’s father’s advice has allowed Nick’s narrative to offer an argument as to whether it is opposed to that view or as to whether it abides to the stereotype; as well as highlighting any divides that there may have possibly been in the higher society classes at the time of writing.

The Great Gatsby: How does Fitzgerald tell the story in Chapter 1?. (2020, Jun 02). Retrieved from https://studymoose.com/great-gatsby-fitzgerald-tell-story-chapter-1-new-essay 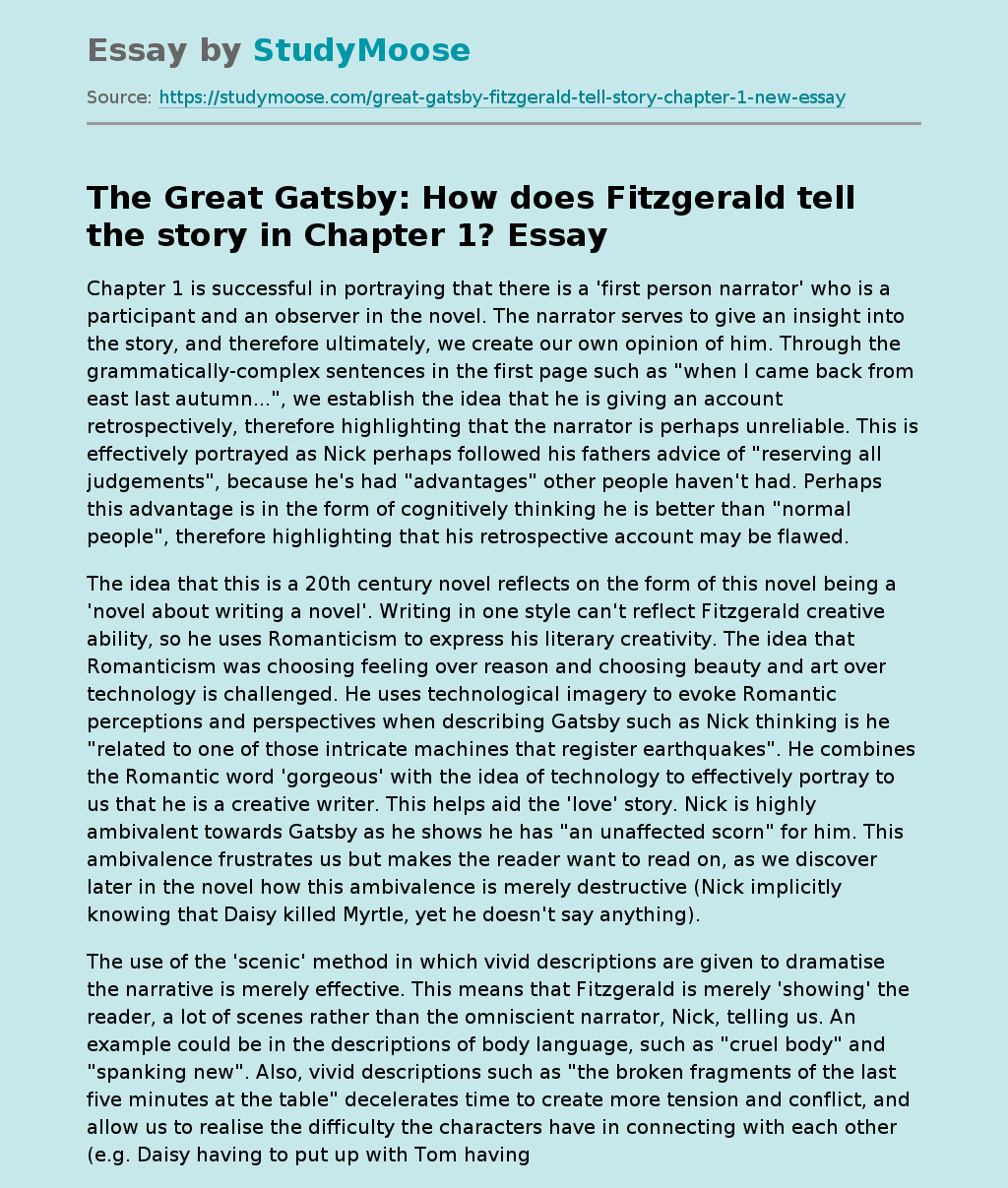