The Great Gatsby by F. Scott Fitzgerald written in the Jazz age of 1920s America, and Sonnet from the Portuguese written by Elizabeth Barrett Browning composed in the wake of Romanticism, although the two texts were composed in two distinct time period both texts are influenced by their varying contexts in their portrayal of the enduring human concerns. Both authors explore the universal human concerns of love, hope and mortality through the use of various language features such as metaphors, use of irony and the subversion of the established values of their time.

Don't use plagiarized sources. Get your custom essay on
“ Great Gatsby and Elizabeth Barrett Browning ”
Get custom paper
NEW! smart matching with writer

Elizabeth Barrett Browning employs the Petrarchan form and male linguistics to challenge the tradition of courtly love whereas Fitzgerald critiques the hedonistic lifestyle, and the fall of the American dream to illustrate the illusion of love and hope. During the Victorian Era people were still very religious and EBB was no different and is reflected in her poetry. She implies that love, if it more than merely attraction and desire, must have a spiritual element.

It also further reflects the value of Victorian ideology in its religious affirmations and patriarchal attribution of masculine power.

This is especially shown In Sonnet 43 when she writes “as men strive for Right.. as they turn from Praise. ” She also writes how their love will continue after their deaths into the afterlife, “I shall but love thee better after death. ” This suggests her deep passion for her love, and how it will carry on. Even in Sonnet 32 where she is very doubtful, the sonnet still shows spiritual, soul-bonding power of ideal love as the poem ends with the musical and spiritual analogy that, together, they create ‘perfect strains’ and their ‘great souls, at one stroke, may do and coat.

As a person like EBB who experienced melancholy, love was very unexpected for her and thus created a lot of doubt, but nonetheless accepts the power of transformation that love brings. In Sonnet 32 she has feelings of inadequacy shown by the extended simile as herself as an ‘out-of-tune Worn viol. ’ EBB makes a magnitude of musical references while also deeming herself unworthy for her lover such as “To spoil his song… in haste, is land down at the first ill sounding note. ” This is saying how she does not want to ruin the song.

She also references the male dominance of the Victorian Era showing how the male which is the active, powerful agent which appears to be playing instrument, and is being referenced to Robert. She also appears to express her doubt about the relationship in Sonnet 13, specifically with the imagery of the torch between both the lovers. However the repeated ellipses suggest an inarticulate awkwardness in expressing her feelings and thus drops the torch. Although in the sestet she recognises the great power of love to cause transformation in life.

SHe mentions her love is “rendering the garment of my life. ” Realising that she cannot deny love, and the enormous power it has. While Browning sonnet’s explore deeply felt love in Victorian Era England, F Scott Fitzgerald explores the elements of love throughout his character of Gatsby and how his obsessional desire for love was futile and destructive, ultimately reflecting the values and perspectives of the 1920s Jazz Age of America. Gatsby’s pursuit of Daisy involved the accumulation of vast wealth used to host massive lavish parties.

The green light on Daisy’s dock repeated 3 times throughout the book symbolises the dream being at the tip of your fingers, yet being unachievable. This was the obsessive, unreasonable longing found expression in the lavish parties at his mansion, as Jordan Baker later explained “so that Daisy would be just across the bay. ” Nick expresses the intensity of Gatsby’s devotion in the metaphor “He waited 5 years and bought a mansion where he dispensed starlight to casual moths. ” Gatsby wins Daisy but is revealed to be illusory.

The Degree to which Gatsby’s desire is based on a false premise and unworthy object is shown when he finally achieves his goal and takes Daisy and Nick to his house. Fitzgerald uses the repeated motif of ‘wonder’ to express Gatsby’s ‘inconceivable pitch of intensity. ’ However Gatsby is soon left defeated as Daisy fails to please Gatsby when she fails to say to Tom “I never loved you”. The fallacy of Gatsbys idealised love is evident in his total defeat: dismissed by TOm as “Mr Nobody from Nowhere. ” However Nick still admires Gatsby for that.

Fitzgerald later reveals there meeting before Gatsby went to war was also illusory and superficial, reinforcing the fact that the values of that time appeared to be based more on materialistic wealth. Finally the failures of Gatsby’s pursuit can be linked to the failures of the American Dream and the loss of spiritual values. The book raises questions whether genuine love is possible in the society and culture of the 1920s where it seems to suggest the impossibility of real love when selfishness, greed and infidelity predominate.

It also depicts how Hedonistic materialism precludes spiritual values and the idealism of the American Dream. The dilapidated billboard “ the eyes of Dr T J Eckleburg” represents the pervasive consumerism and materialism have taken place of spiritual values. . Dr T J Eckleburg appears later in the book as a motif for the absence of God in the world as when Wilsons remembers confronting Myrtle about infidelity, he said “ You may see me… God sees everything. ” In Conclusion the two texts offer differing viewpoints in regards to love, this can be linked to both their author’s values and perspectives during their particular time. 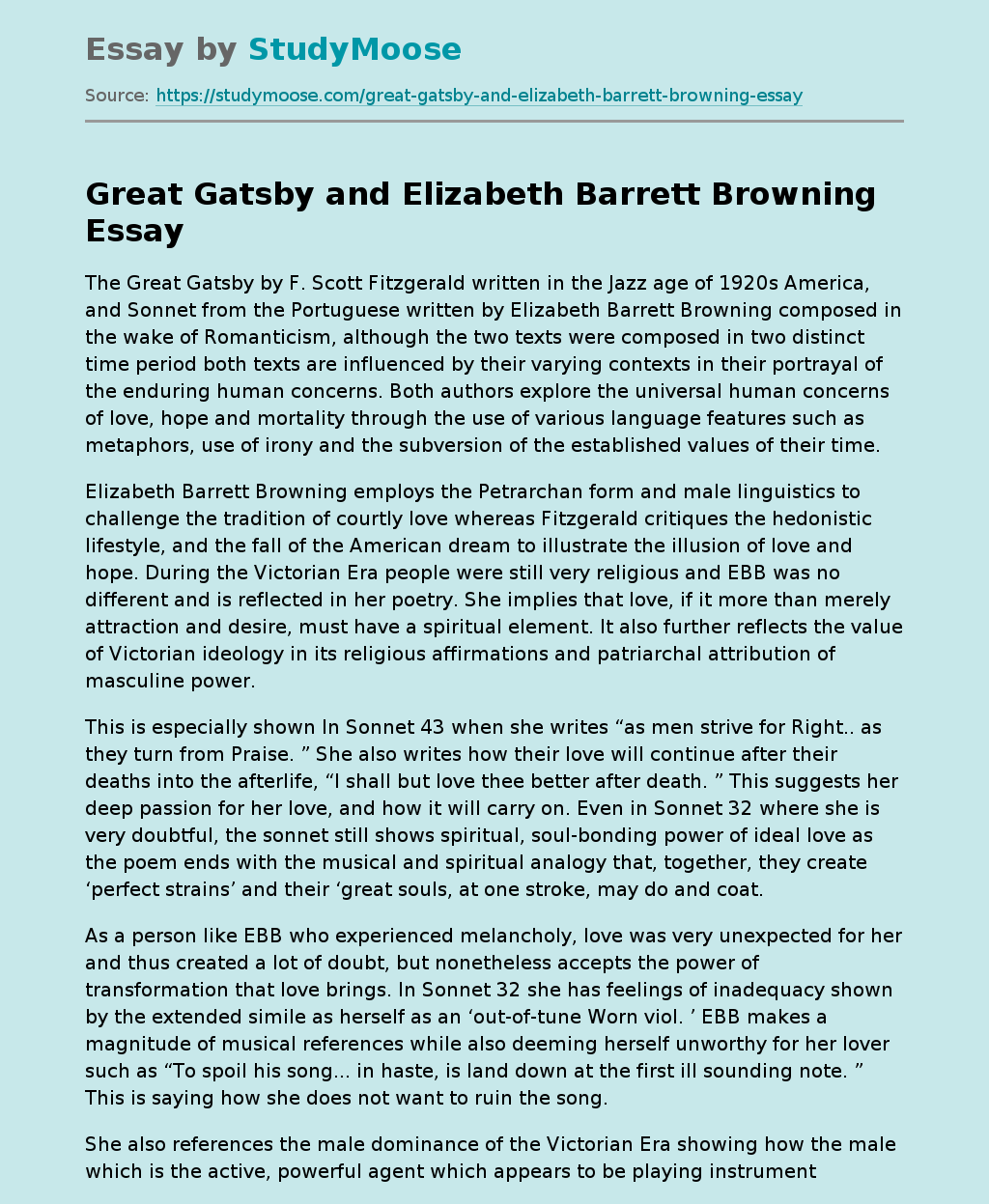