In what ways do the texts you have studies highlight the changing values of dreams and desires? The concept of dreams and desires are a constantly changing ideal experienced in human nature, and this concept is explored through Elizabeth Barrett Browning’s anthology of poems “Sonnets of the Portuguese” and Francis Scott Fitzgerald’s satirical novel “The Great Gatsby.” Correlative thematic concerns arise between the Victorian era and the Jazz Age in relation to dreams and desires and furthermore to the nature of love and perceptions are undertaken making these texts valued upon consideration of each other.

Through deconstructing these texts it becomes apparent that these values are influenced by each text’s composer’s contextual influences.

Similarly, the role and value of each composer within their context must be undertaken to comprehend the value and perspective of their reconstruction of their era. Elizabeth Barrett Browning’s Victorian context shapes her perception in the evaluation of love and the role of women.

In the construction of her poems, ‘Sonnets from the Portuguese’ structured inspiration derives from Romantic prose, whilst pertaining to the strict form. Allowing for a focus on the thematic concerns of her poems rather, Barrett Browning’s poems emphatically explore the progression of the highly idealised love of herself and Robert Browning. Rejecting the social expectations of her context through her presentation to Browning of her deeply personal poems, her poems provide insight to the female perception of courtly love.

Through this alone we can see that Barrett Browning is an example herself of changing values as she rejects social conventions of her era by using the sonnet form, which was dominated by males at the time, whilst women tended to be limited to the novel form.

She uses this form to present and express to Robert Browning the extent of her love. Love is explored in both texts as a major thematic concern representing changing values of dreams and desires. Jay Gatsby in Fitzgerald’s “The Great Gatsby” had spent the last 5 years of his life building his dream and perfect fantasy that he wishes to share with Daisy. Throughout the novel his dream and desires are tested yet he still remains hopeful. Out of all the characters Gatsby seems to be the only one with this hope, making him a perfect representation of the changing ideals of love, and furthermore dreams and desires.

In Barrett Browning’s time, the notion of love was believed in and practiced through courtship in comparison in the Jazz age where love was no longer idolised and only one out of so many people has that same kind of hope as nearly 80 years earlier. When comparing these 2 texts we can see that over this time the value of dreams and desires changes, in this case the significance of love becomes less important. In the Great Gatsby, the director uses symbolism to show the changing value of dreams and desires. The green light at the end of Gatsby’s wharf represents his hopes and dreams for the future. It is first brought up in chapter 1 shining brightly; representing his firm belief in his love for daisy, until it gradually loses its strength in Chapter 9 “Gatsby believed in the green light, the orgastic future that year by year recedes before us.”

Throughout the movie his belief in his dreams are tested and through the gradual decrease in the green lights intensity, we can see that it represents Gatsby’s gradual decrease in his belief in his dreams as he realises the problems that arise and how they affect the successfulness of his desires. This change over a short time is also present in Barrett Browning’s sonnets and her love for Robert. In sonnet 1 she describes her love as a shadow drawing her back by the hair, as she doesn’t understand how she’s feeling, she’s unfamiliar with the feelings of love. Gradually by the end of her sonnets she is strong in her love for Robert saying “how do I love thee, let me count the ways!” as though she loves Robert in more ways than 1 and she knows how she feels now and is certain of those feelings. This represents her own changing values as her dreams and desires are uncertain, yet they become to love Robert and throughout the sonnets we can see that she values this love more and more and becomes more confident in that love.

When considering the context of Elizabeth Barrett Browning we can recognise the importance of her sonnets and furthermore her love for Robert. When viewed as a whole, her sonnets represent the change she experiences of the value of her love being highlighted. In Fitzgerald’s “The Great Gatsby” this gradual change idea is also present in the character Jay Gatsby and his loss of value for love and his own dreams and desires. In both these texts we can see that dreams and desires are changing values both in short and longer periods of time. The context of each text is taken into account when deconstructing these texts as it shows the significance of the representation of changing values. Jay Gatsby is the only one in his time who shares the same hope in his dreams and desires as Barrett Browning 80 years prior. Therefore we can see that both the great Gatsby and Sonnets of the Portuguese are texts that highlight changing values of dreams and desires. 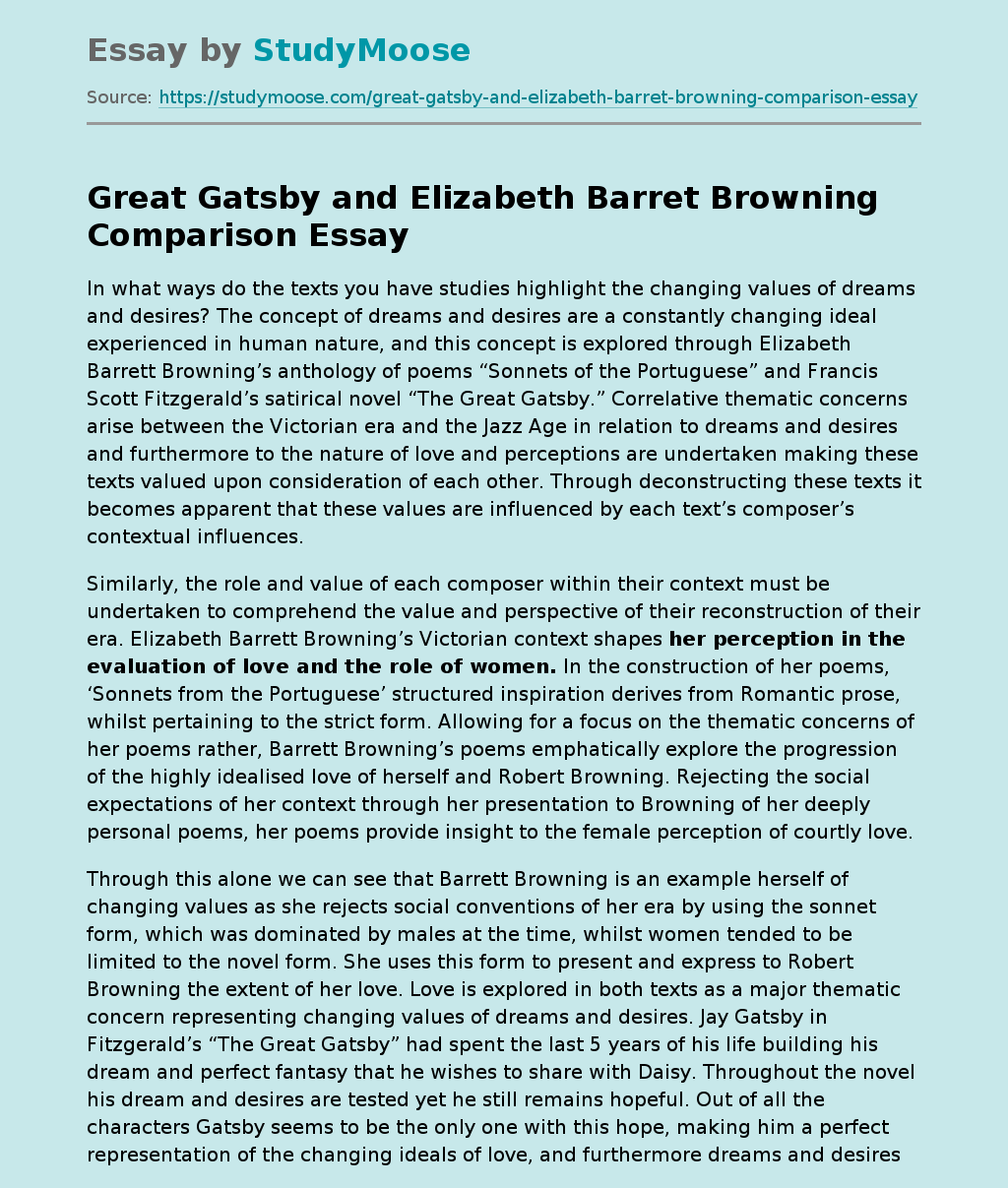