An analysis of F.Scott Fitzgerald’s “The Great Gatsby”

“The Great Gatsby” In the book, The Great Gatsby, Francis Scott Fitzgerald’s continuous use of the Doctor T.J. Eckleburg sign symbolizes an inept God. He also shows us that even though God is watching; bad things still happen. The Great Gatsby showed a corrupt society under God’s eyes. When Nick followed Tom, to meet Tom’s mistress, the only thing that Nick really noticed was the sign starring at him as shown in this quotation.

Don't use plagiarized sources. Get your custom essay on
“ “The Great Gatsby” Analysis ”
Get custom paper
NEW! smart matching with writer

“I followed him over a low whitewashed railroad fence, and we walked back a hundred yards along the road under Doctor Eckleburg’s persistent stare.” (24) Nick felt a little uneasy with this sign starring at them. Nick also saw the sign when he, Jordan, and Tom were at the garage right before they when in to town, to meet with Daisy and Gatsby. The sign made him feel uncomfortable with the events to come.

Nick was not the only one that felt the sign had some power.

After Tom told his mistress, that lived across from the Doctors enduring glare, he looked to the sign “‘Terrible place, isn’t it,’ said Tom, exchanging a frown with Doctor Eckleburg.” (26) Wilson was the one who believed that the sign was God, he showed this when he was telling Michaelis about the fight that he and his spouse had gotten in to. “‘I told her she might fool me but she could fool God. I took her to the window… I said ‘God knows what you’ve doing, everything you’ve been doing.

You may fool me, but you can’t fool God!'” (160) The window he was looking out, was the window that directly pointed at Doctor T.J. Eckleburg. This sign that Wilson saw as watch, also watch his wife being slaughter. This was a sign symbolized God, and yet, it allowed many affairs to go which led to myrtle’s death. A God with any kind of power would have stopped all the wrong in society, but the inept God, also had to show that he can not always save you 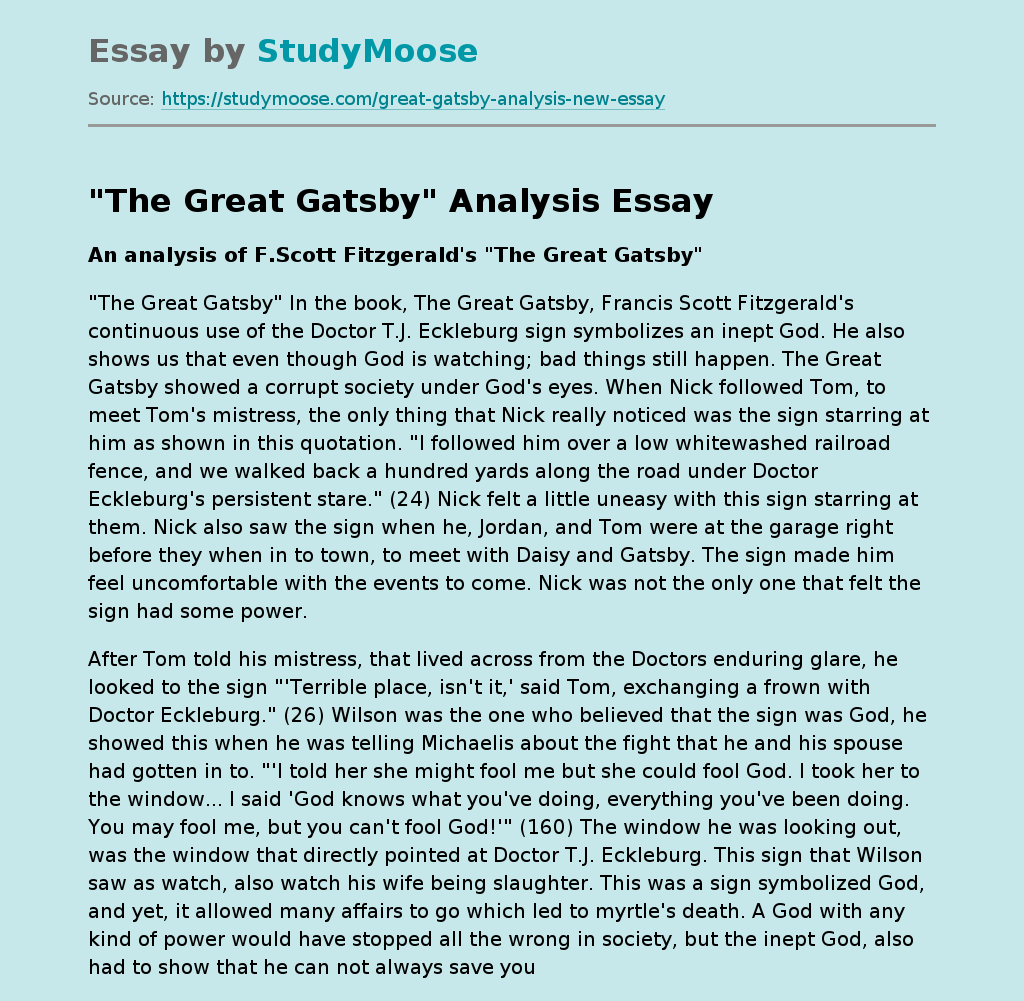