The opening chapter of 'Great Expectations'

When Magwitch appears in the fourth paragraph he really does contribute to the dark, miserable setting, and fits it perfectly, creating a dark mood. Dickens describes Magwitch with lots of detail; “A fearful man, all in coarse grey, with a great iron on his leg. A man with no hat, and with broken shoes, and with an old rag tied round his head.

A man who had been soaked in water, and smothered in mud, and lamed by stones, and cut by flints, and stung by nettles, and torn by briars; who limped, and shivered, and glared and growled; and whose teeth chattered in his head” the extensive detail allows the reader to feel some of the fear that young Pip is experiencing.

Don't use plagiarized sources. Get your custom essay on
“ The opening chapter of ‘Great Expectations’ ”
Get custom paper
NEW! smart matching with writer

Magwitch is very aggressive towards Pip; ‘hold your noise or I’ll cut your throat!

‘ this is to show Pip who is in charge of the situation and to scare Pip into believing he has to comply with whatever it is Magwitch wants him to do or he will be harmed, Magwitch is used to receiving orders, his role has been reversed and he now enjoys giving them to Pip.

The switch in power is shown in this quote; ‘His eyes looked most powerfully into mine, and mine looked most helplessly into his’ Magwitch demands Pip to steal for him; ‘You get me a file. And you get me wittles. You bring ’em both to me’.

Magwitch is dreadfully desperate to escape and is willing to sink low enough to become an animal; ‘I wish I was a frog, or a eel.

‘ Magwitch’s grammar is very bad; ‘You know what wittles is? ‘ he actually means victuals which is evident he is uneducated and has never read as he can’t pronounce his words properly. He is weak and needs food and help, the iron on his leg is evidence to say that he is an escaped convict; he is in a state of collapse. Young Pip is truly terrified by Magwitchs appearance, as any child would be, although he always manages to keep his manners.

The older Pip, however, the narrator writing with hindsight, can now see through the vicious outside and appearance and notices that he is desperate and has no other choice. Just after the horrifying appearance of Magwitch in the fourth paragraph; the extensive description of the desperate Magwitch from the younger narrator shows a sign of sympathy for him; ‘A man who had been soaked in water, and smothered in mud, and lamed by stones, and cut by flints, and stung by nettles, and torn by briars’.

It is the repetition of the word ‘and’ that creates the sympathetic view on Magwitch as it gives the reader an idea of just how desperately hurt he really is; the longer the description goes on, the more sympathy the reader starts to feel for Magwitch. Pip uses standard English throughout the chapter, even in moments of terror he still has the manners to address Magwitch as ‘Sir’. Magwitch, however, uses coloqual English, which shows his lack of education.

It is easy to derive by the style of writing that it is not a novel written in this day and age but is of the Victorian era and is very formal. This goes to show that Pip was raised at a time that life was difficult and Pip probably didn’t have a very joyful life. Dickens leaves this chapter on a cliff hanger which I believe at the time was because the novel was first written in a weekly magazine, so leaving the story on a cliff hanger was essential in keeping readers interested.

The interaction between the two characters is what builds up tension. To conclude, I believe that the opening chapter of ‘Great Expectations’ is extremely successful at getting the reader interested and wanting to read on into the rest of the book. The opening is very exciting and the excitement is left to hover on a cliff hanger; will Pip steal the ‘file’ and ‘wittles’ or not? The duel narration is also successful in enticing the reader as it gives a mature adult, and a nai?? ve child’s viewpoint and is very interesting.

The opening chapter of 'Great Expectations'. (2020, Jun 02). Retrieved from https://studymoose.com/great-expectations-novel-analysis-essay?post 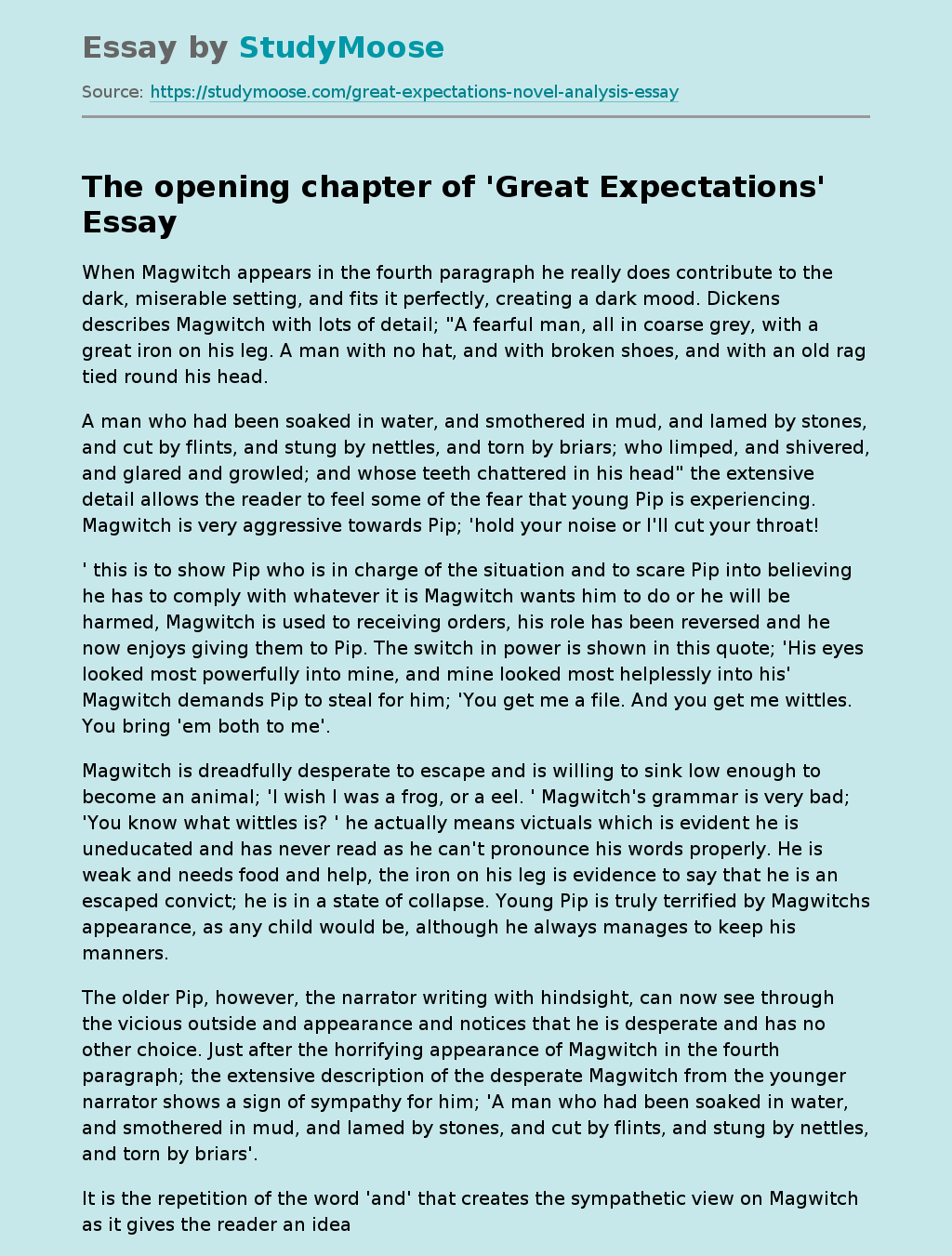