Every author has his own style of writing. He may use an idea in one of his novels in another. In the books Great Expectations and Oliver Twist by Charles Dickens, the author uses descriptive plots, exiting characters, and a meaningful message to prove that two ideas in a book although similar can be presented differently. Throughout the plot of Great Expectations and Oliver twist, Dickens uses robbery to show the similarities and differences within the book.

After a young child, Pip, visits his parents’ tombstone in the graveyard, he comes across a petrifying convict on the run; the convict threatens to hurt Pip unless he bring the man food and makes the child keep his whereabouts a secret.

Don't use plagiarized sources. Get your custom essay on
“ Great Expectations and Oliver Twist ”
Get custom paper
NEW! smart matching with writer

Pip wakes up in the middle of the night and admits, “I was in mortal terror of myself, from whom an awful promise had been extracted…. I had no time to spare. I stole some bread, some rind of cheese, and about half a jar of mincemeat….

and a beautiful round compact pork pie. The child is terrified of the convict and is afraid what will befall him if he does not do as the convict instructed. The boy steals food , not out of the evil within his heart, but out of fear that the felon might hurt him. On the other hand, Oliver, a homeless orphan, is welcomed into the home of Fagin (also known as the Jew) who brings in stray children.

A while later, while walking through the city streets with his inmates, what appears before the child is, “….

Oliver’s horror and alarm as he stood a few paces off, looking on with his eye-lids as wide open as they would possibly go. o see the Dodger plunge his hand into this old gentleman’s pocket, and draw from thence a handkerchief, which he handed to Charley Bates…. In one instant the whole mystery of the handkerchiefs, and the watches, and the jewels, and the Jew rushes upon the boy’s mind. ” Fagin always teaches Oliver how to snatch handkerchiefs, jewels, without oliver realizing what he is doing it for and now the boy understands that they are all robbers and they wanted to turn him into one as well.

Seeing Dodger and Charlie rob the old man brought pip to such a realization as to stop himself into falling into their trap. Pip robs out of fear of a threatening felon but Oliver stops himself from committing such a crime using the clues around him; Pip could have stopped himself from stealing from his home if he was smart enough. Similarities are found between Magwitch, a runaway convict, and Bill Sikes,a dangerous robber, as they do fairly identical actions with opposite outcomes. keep still, you little devil, or I’ll cut you’r throat” Magwitch is bullying Pip, an innocent child, by telling him that he will kill him if he does not do as the criminal instructs.

Though traumatizing the child forever, Magwitch benefits Pip thought his childhood to sooth guilt brought about through his terrible actions. “If you speak a word out o’doors with me, except when I speak to you, that loading will be you’r head without notice. ” Bill Sikes forces young Oliver, a lone orphan, to help him with a major robbery, willing to shoot the child if he does not listen.

Bill shoots Oliver and does not regret it one bit, acting as the perfect villain. Magwitch may have started out like Bill but he was exposed to be a good hearted man. In Dickens’s novels it is presented how ones wrong doings does go unpunished. “It was two years more before I saw Estella. I had heard her as leading a most unhappy life, as being separated from her husband, who had used her with much cruelty… ” Estella, a cruel woman who breaks a young boy’s heart, lives her life suffering through a tragic marriage.

Estella pays the price of her actions, feeling the pain that she gave the boy who’s hart she broke when she was younger. “There was nobody there ti speak to him; but fell back to render him are visible to the people who were clinging to the bars. ” Fagin, the robber, influenced many children to believe that robbing for a living is justified, showing them his many methods of robbery from previous experience of his own. The man is forced to face his fate by eternally rotting in. prison. Both Estella and Fagin pay for the price of their actions. 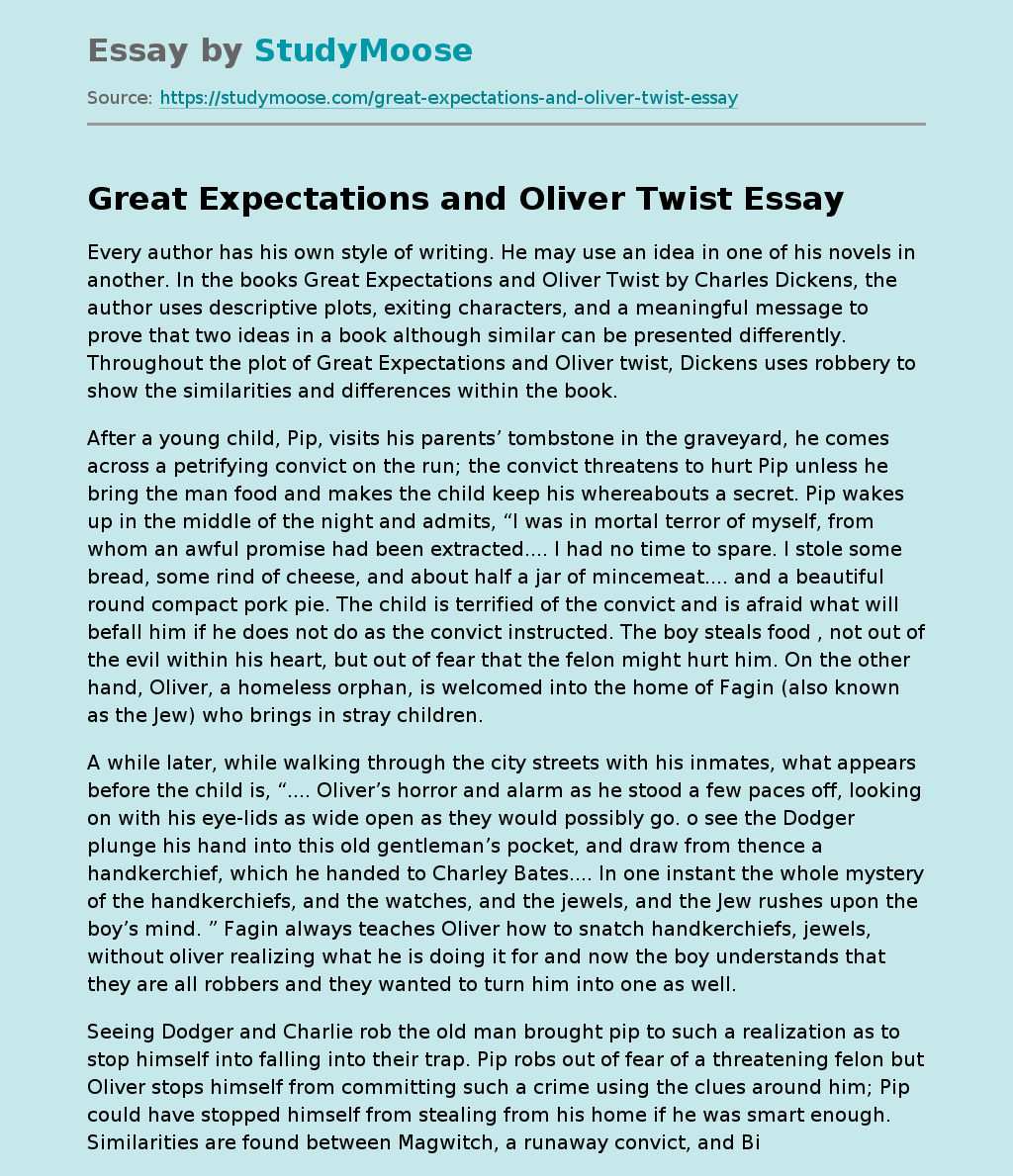